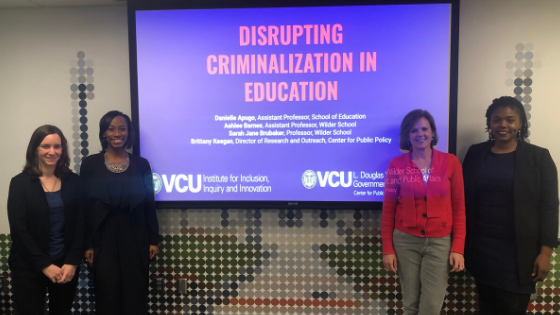 This panel explored ways in which the criminalization of trauma in schools, and among African American and Latinx children in particular, may be disrupted through the coordination, facilitation, and evaluation of evidence-based programs that contribute to children’s healing, resilience, and empowerment.

“We are working to make schools and spaces for healing and love. We have found that school is a sight where children experience a lot of trauma,” stated Barnes.

“Our core’s focus is particularly on the intersecting race and gender identities of black girls.”

A part of the core’s goal is to support families, communities, and educators by providing community-based alternatives to incarceration.

“We must think of ways to disrupt the school to prison pipeline or trauma to prison pipeline trends,” said Barnes. “There is evidence that suggest that zero tolerance policies as well as increased presence of school resource officers (SROs) in school have led to the directing of youth from schools to the juvenile justice system; as well as led to the criminalization of trauma and the discreet surveilling of racial ethnic minorities.”

The panelists identified both national and local trends such as cultural stereotypes as well as described some of the changes that schools have made to avoid ‘push out’ of students and disrupt the over policing of black minorities.

“Research has also shown that schools often punish black girls who act up because of stereotypes surrounding black girls being ‘angry or having attitudes,’ while latinx girls are being overly disciplined for violating dress codes and stereotypes around sexualized images.”

When weighing-in local statistics, Barnes pointed out that Richmond Public Schools have been among the highest top 15 divisions of schools for suspension rates as well as having the lowest graduation rates and highest drop-out rates.

“Students have missed tens of thousands of days school due to out of school suspension,” said Barnes.

“Out of school suspension may seem like a good idea at a time, but unfortunately they have far reaching negative effects in achievement of graduation, employability and often increasing chances to be involved in the criminal justice system and incarceration.”

The panel also reflected on how teachers often play a role in criminalization of students.

“It is found in many cases that teachers are trained to respond in certain ways where everyone fits in the same box without knowing that students come into the learning space with all different types of experiences and traumas,” commented Apugo.

The importance of recognizing the connection between criminalization and survival and asking the question, “What are student having to do to survive?” was also emphasized during the discussion.

“We must talk through how to get teacher’s more knowledgeable and to better understand what is taking place. The changing of curriculum is necessary as well as structurally looking at how to target recruitment and retention in a way to impact students and their outcomes,” stated Apugo.

The overall effect of trauma on students, especially in urban context, such as aesthetic trauma in relation to black girls was also explained in more detail.

“Let’s start to unpack policies and procedures in schools that are imbedded with coded language such as ‘no unruly hair’ and asking what it really means,” said Apugo. “How do we define these things? As educators and stakeholders, we need to start having conversations around the language that is effecting black girls disproportionately.”

Keegan reviewed the results of the Wilder School Commonwealth Poll, which was conducted toward a representative sample of Virginians by phone. The poll received between 810-830 responses in regards to Virginians thoughts towards specific topics such as student mental health and school safety and how the general public perceives different issues and the policies that surround them.

“The positive trend is that people believe that the schools are safe. What’s interesting and where I think we need to change the conversation is that despite the results of the poll, self-harm is by far the greatest threat to students, not other students and outsiders,” stated Keegan.

“That is not what people are seeing, so if we are having the conversations about policies and practices of what we are doing in schools and how we are approaching student mental health, it seems like people might not realize how big of an issue self-harm can be.”

Brubaker also challenged the results of the survey and highlighted that the question needs to be asked in a way that includes everyone and recognizing that “different groups may not be safe.”

“We need to point out that shootings are lot less likely to happen than mistreatment by school teachers or other kids in school,” stated Brubaker. “Where harm is done in school versus where we are putting money and how we are staffing schools is the real issue. There is a lack in counselors, nurses, psychologists, social workers and students being affected by trauma need them.”

The national recommendation is that schools have 250 students to one counselor. A study from 2016 found that only 3 states are actually meeting that recommendation.

The panelists described numerous policy recommendations including how to go about prioritizing funded at the state level and investing time in educating representatives.

“In order to prioritize funding, we need different people with different perspectives at the table. They must be aware of these issues, what they mean and who they are impacting, “said Apugo.

“We also need to invest time to educate individuals who are representing community members. It’s important to give accurate information to people who are pushing their agendas and making decisions on our behalf.”

Above all, the panelists agreed on the cruciality of ensuring the accuracy of data and providing the context around how we look at statistics.

“It is very important that when we present data that we preface it with context because when put together without the right voices being represented, it still does not make much of a difference.”