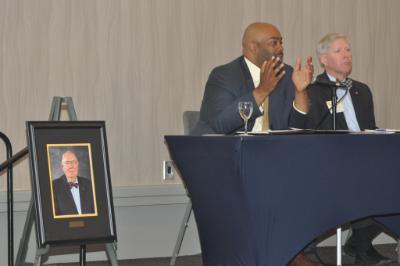 Dels. Lamont Bagby and Steve Lamont discuss education-related bills next to a portrait of the late Dr. William C. Bosher Jr. during the CEPI 2018 Legislative Conference. 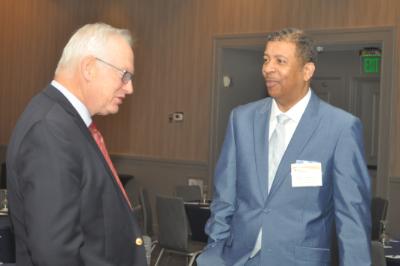 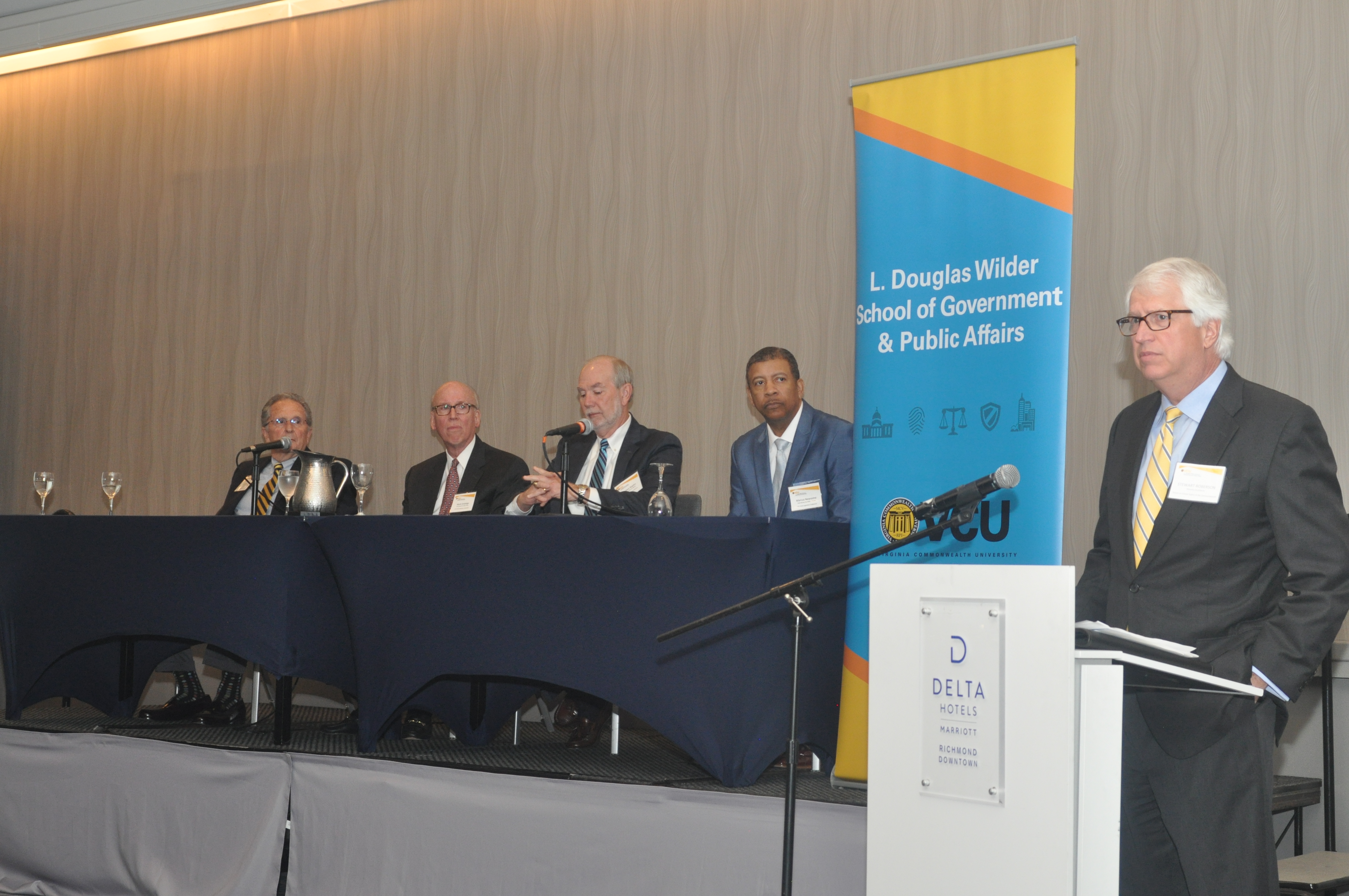 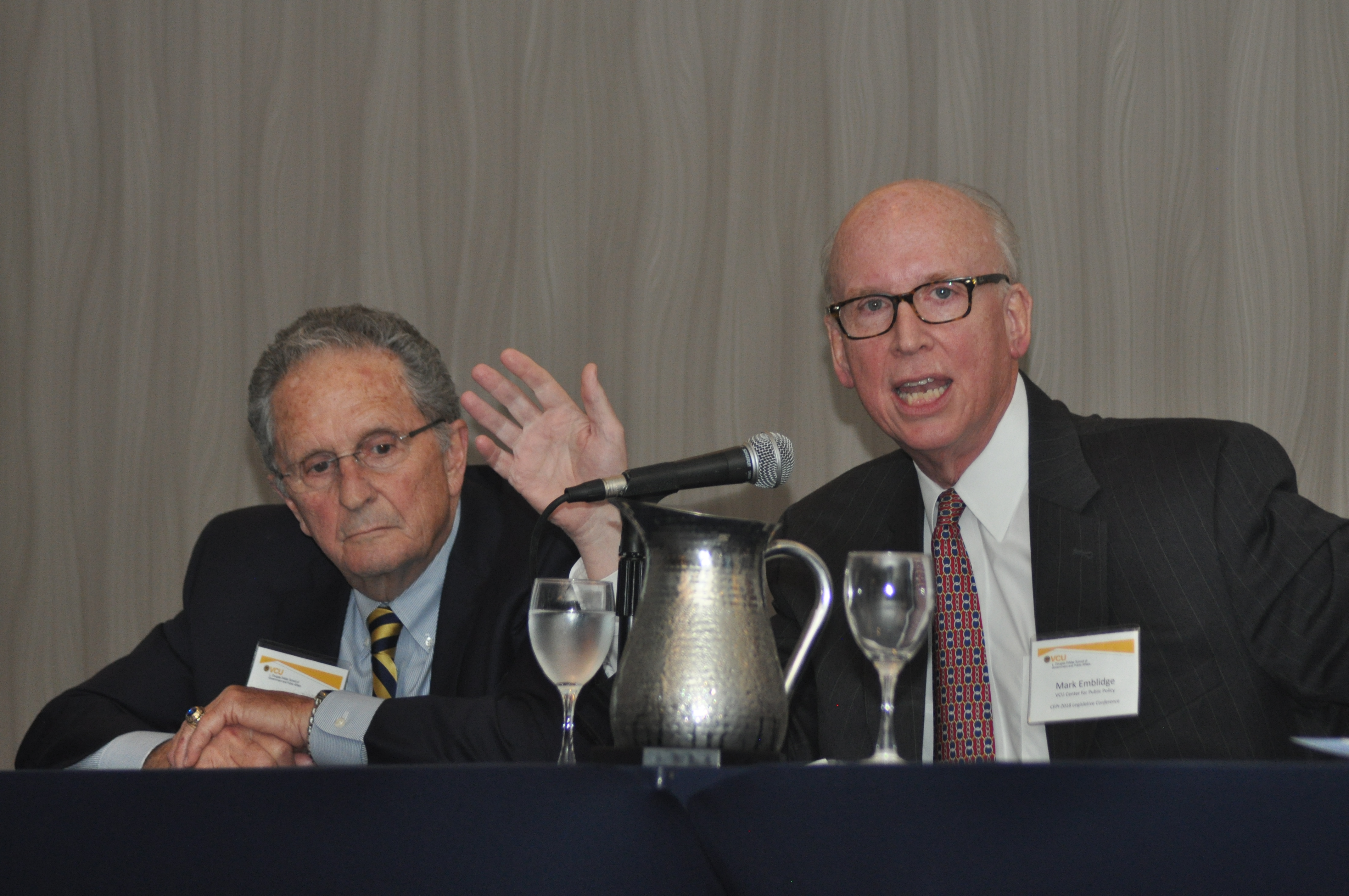 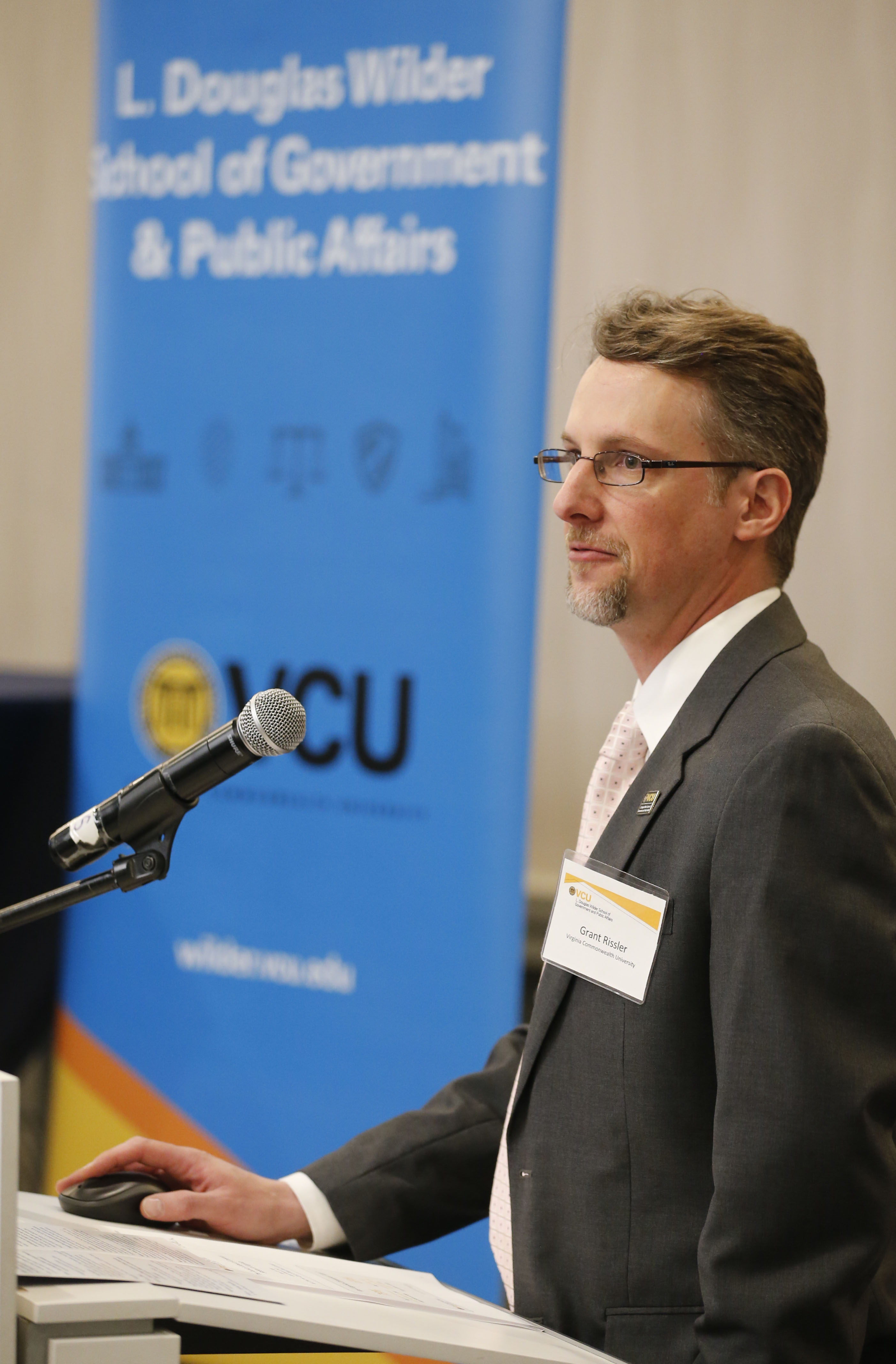 Dr. Grant Rissler of the Wilder School’s Center for Public Policy gives an overview of the 2017 Summer Public Policy Poll at the Forum on School Safety in the Commonwealth. 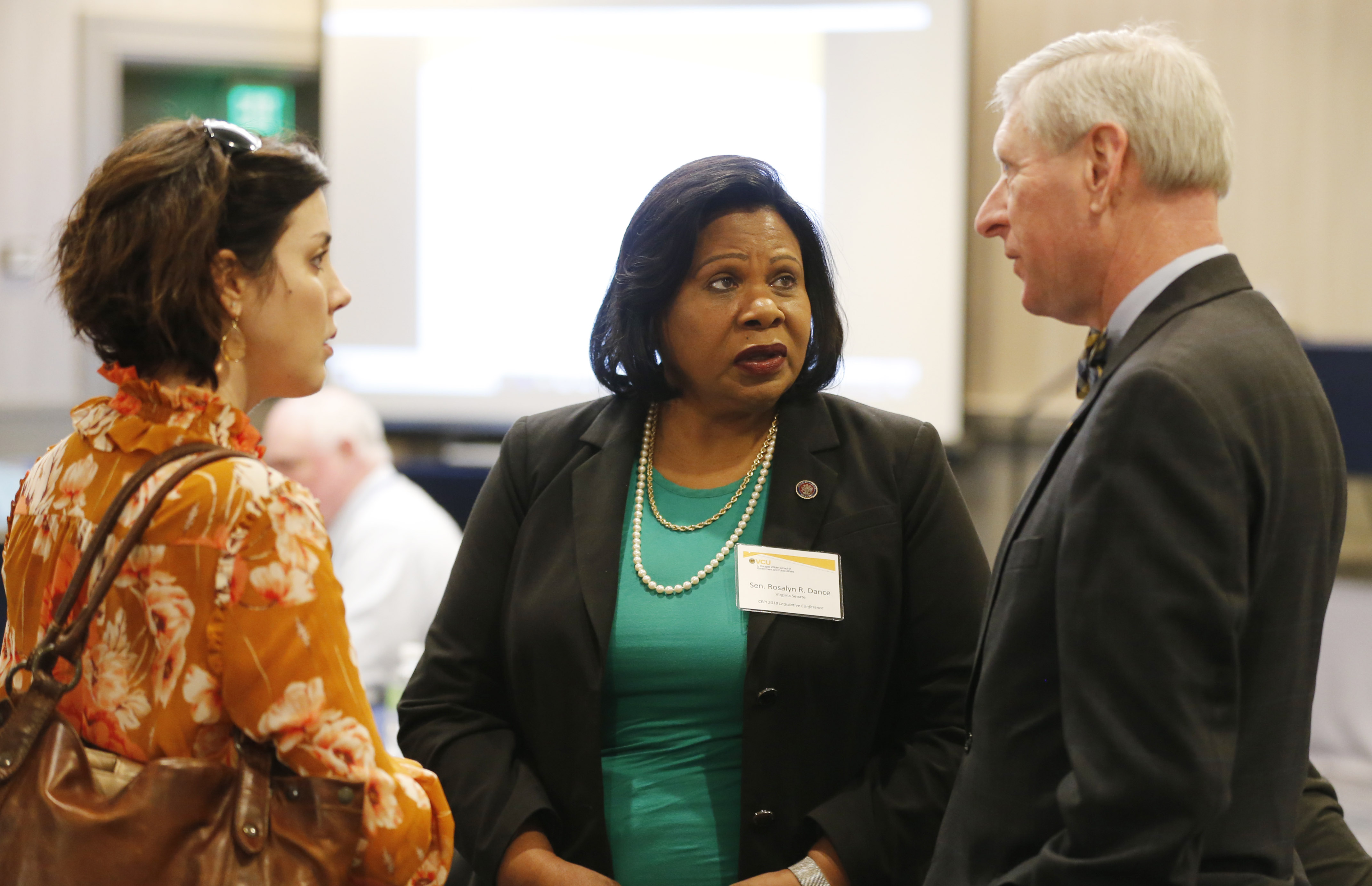 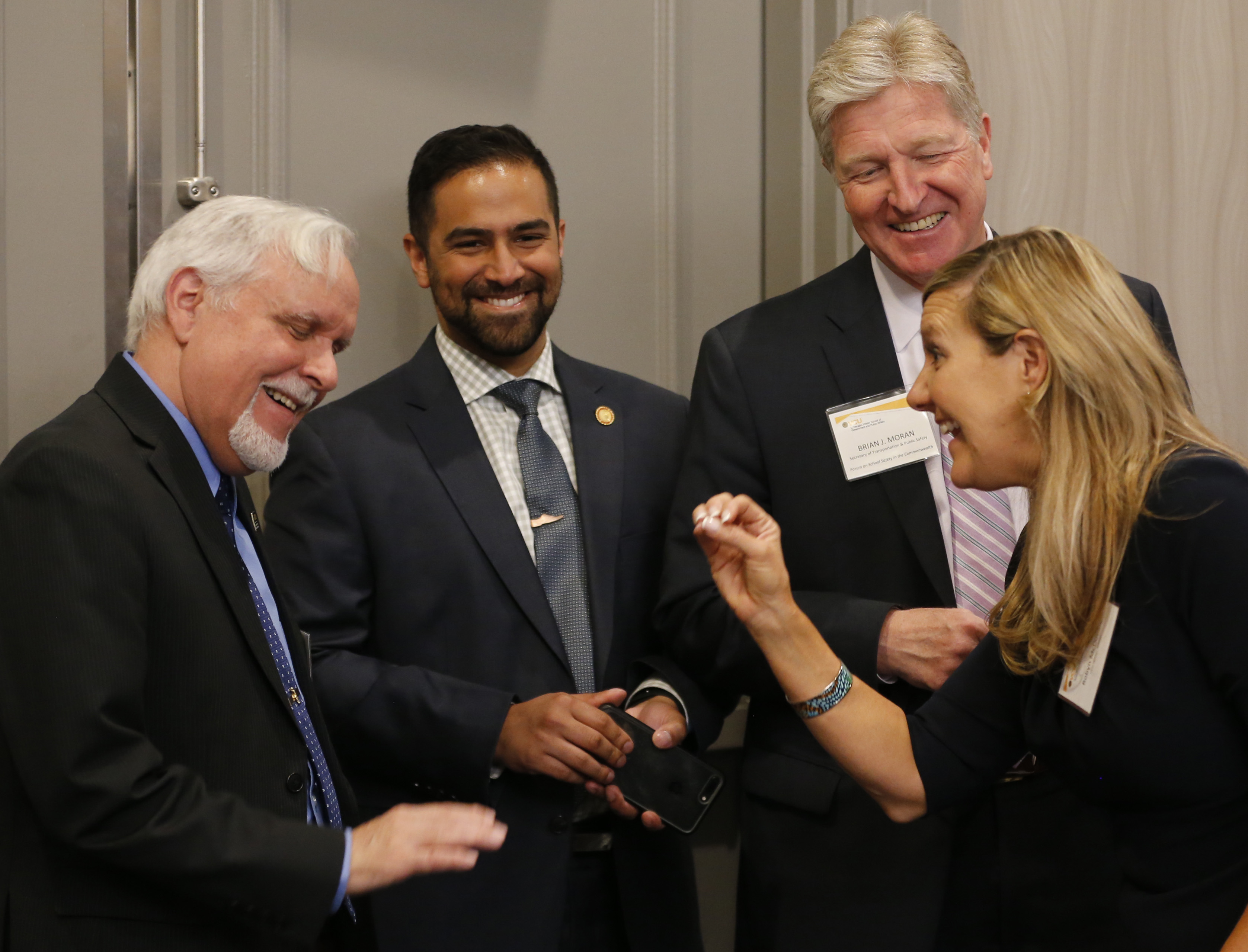 Dr. Robyn McDougle (right) with Secretary Brian Moran, Asif Bhavnagri of the Secretary’s Office, and James Keck, Wilder School assistant professor, at the Forum on School Safety in the Commonwealth. 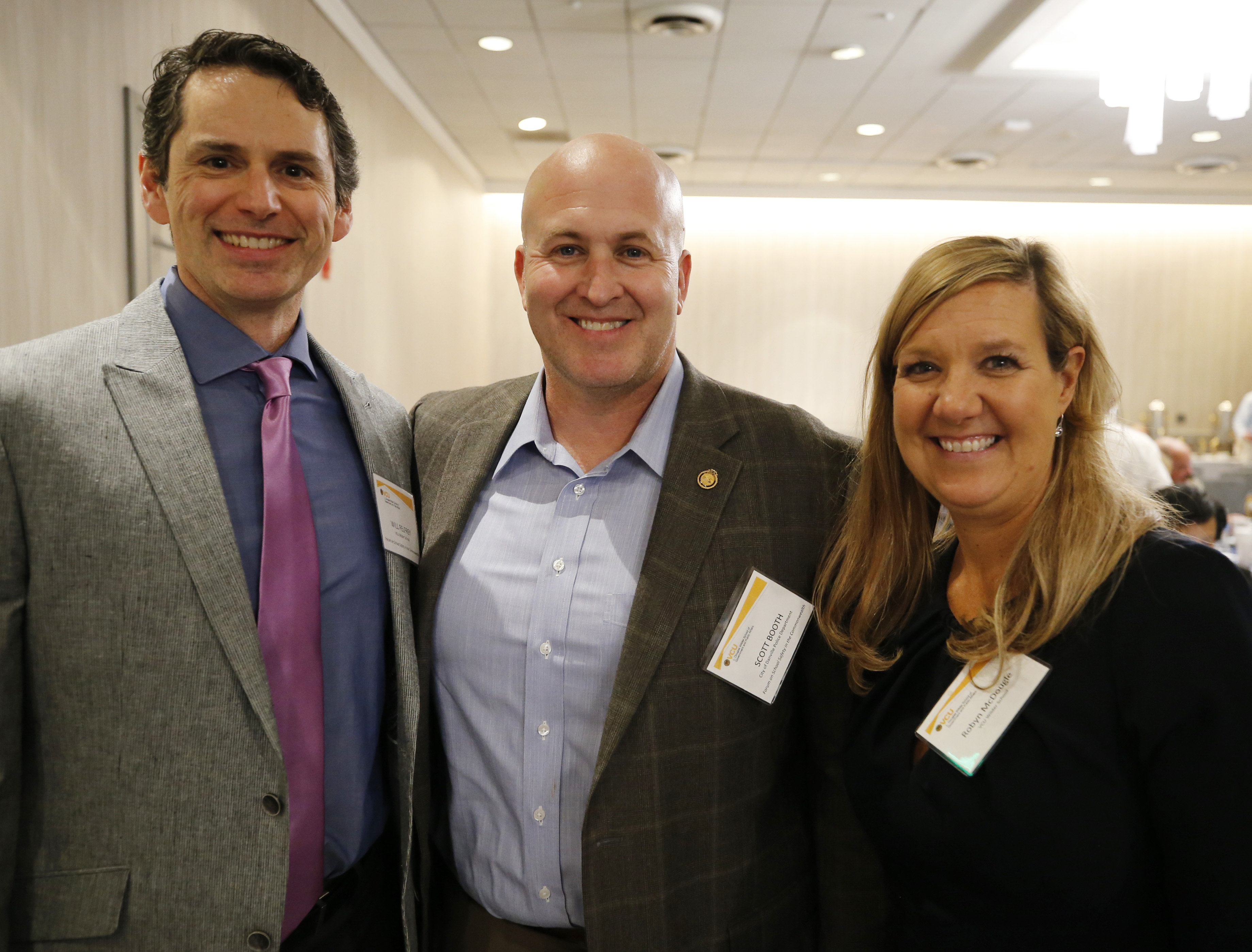 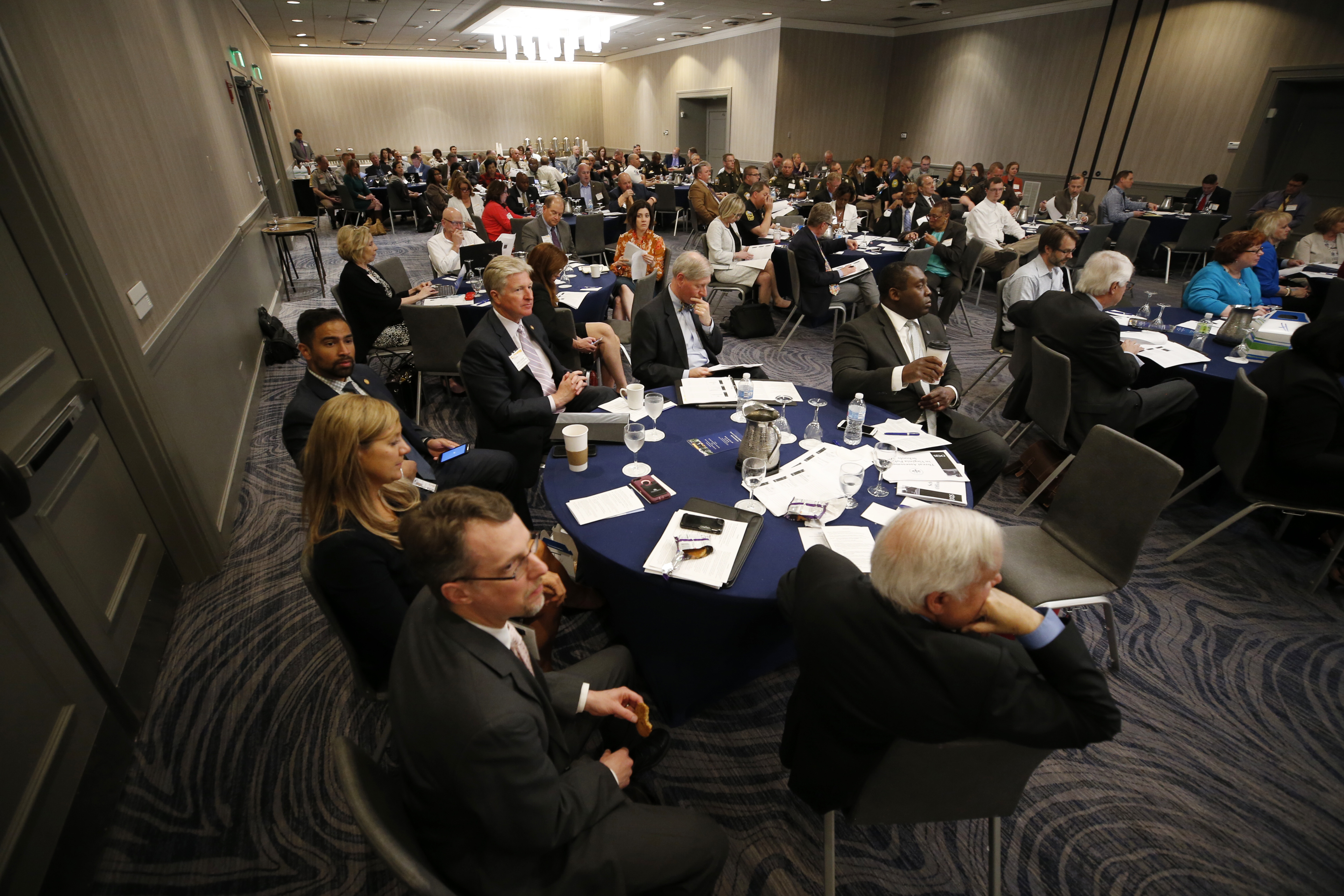 The Forum on School Safety in the Commonwealth drew lawmakers, public safety leaders and educators from across Virginia.

The Wilder School convened legislators, public safety officials and educators from across the state at two events on April 23 to examine school safety in Virginia and to mark the 20th anniversary of the founding of the Commonwealth Educational Policy Institute.

The Forum on School Safety in the Commonwealth, held in the afternoon, was jointly sponsored by the Wilder School’s Center for Public Policy and the Office of the Virginia Secretary of Public Safety and Homeland Security.

“We are thrilled to be able to partner with Secretary Brian Moran’s office on these important topics of improving safety and education in our commonwealth,” said Robyn McDougle, Ph.D., interim director of the Wilder School’s Center for Public Policy. “This aligns directly with our mission to share research that informs public policy.”

School safety has emerged as an issue of national concern since the February shootings of 17 students by a teen at a high school in Parkland, Fla.

“Since Parkland, there has obviously been a renewed focus and attention to this issue,” Moran said. “This is not necessarily something new, but with a situation like Parkland, we welcome the renewed attention. We want to make sure that our schools are safe.”

Virginia continues to be a leader in school safety through the Department of Criminal Justice Services’ Virginia Center for School and Campus Safety, he said, “but we must continue to develop strategies to ensure a safe learning environment for our children moving forward.”

Grant Rissler, Ph.D., assistant director of the Wilder School’s Office of Public Policy Outreach— located in the Center for Public Policy—shared the results of its Summer 2017 Public Policy Poll that showed that 79 percent of Virginians feel that public schools in their communities are safe or very safe, while 69 percent feel that way about safety on the state’s college and university campuses.

Donna Michaelis, manager of the Virginia Center for School and Campus Safety, gave presentations about threat assessments and school resource officers, which panelists agreed were key to the prevention of shootings and other threats in schools. About 80 percent of high schools across Virginia have full-time school resource officers, while nearly 70 percent of middle schools do.

James Keck, an assistant professor of Homeland Security and Emergency Preparedness at the Wilder School, moderated the session, “Threat Assessment Teams in Virginia: Where Are We Now and Where Are We Headed?”

“Agencies must make careful decisions when identifying and selecting school resource officers,” Pelfrey said. “The right officer can relate to young persons and will build productive relationships.  Conversely, the wrong officer can alienate students and foster a lifetime of mistrust.”

The Legacy of Bill Bosher

In the morning, CEPI’s 2018 Legislative Conference reviewed key education legislation from this year’s General Assembly session and paid tribute to William C. Bosher Jr., Ed.D., who founded CEPI and served as executive director and distinguished professor of public policy and education at the Wilder School until his death in December 2014.

Dr. Bosher had a remarkable career. Among his many leadership roles, he served twice as state superintendent of public instruction and was also superintendent of Henrico County and Chesterfield County public schools, as well as a former dean of the VCU School of Education.

“He helped to build a system of choice with public schools that gives an extraordinary range of opportunities for students,” Holsworth said. “You can’t talk about education unless you talk about public policy.”

The second panel, “20/20 Vision in Education Policy: Reflecting on Trends of the Past 20 Years and Looking Ahead to the Next 20,” featured Steve Staples, Ph.D., former state superintendent of public instruction; Richard Vacca, Ph.D., professor emeritus, VCU School of Education; Marcus Newsome, Ph.D., superintendent of Petersburg City Public Schools; and Mark Emblidge, Ph.D., of the Center for Public Policy.

The importance of school safety, the evolution of school reform and accountability, ever-changing technology, parental engagement, and school structure were among the issues explored.

Read coverage in the Richmond Times-Dispatch.