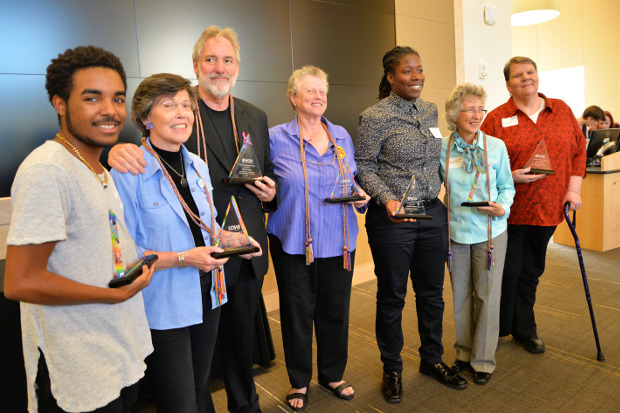 The Burnside Watstein Award honors individuals who enrich the sense of community at VCU, and make a significant difference in the lives of LGBTQIA faculty, staff and students.

Turner was recognized for years of service within the local LGBTQ community. He is an active member of Side By Side (formerly ROSMY), a Richmond area nonprofit that helps to raise support and awareness for homeless LGBTQIA youth. As an underclassman, Turner hosted the inaugural LGBTQIA fundraising ball for the organization which raised more than $500 in support.

He is also the founder of House of Opulence, a collective of artists who work to create safe spaces at the university while providing support and mentorship opportunities for gay men of color.

Turner was presented with the award by Camilla Hill, interim assistant director of VCU’s Office of Multicultural Student Affairs, during a ceremony at the University Student Commons on October 4.

“A passionate advocate for LGBTQIA youth, Lucky has gone out of his way to make sure that the LGBTQIA underclassmen here feel supported and welcomed, cultivating safe spaces both on campus and off campus,” Hill said.

“His work focuses primarily on the affirming the identities of Queer and Trans youth of color who often do not garner representation in the mainstream LGBT+ movement.”

The Burnside Watstein Awards are presented annually by Equality VCU, a collaborative and advisory body representing the concerns of the lesbian, gay, bisexual and transgender community of Virginia Commonwealth University.