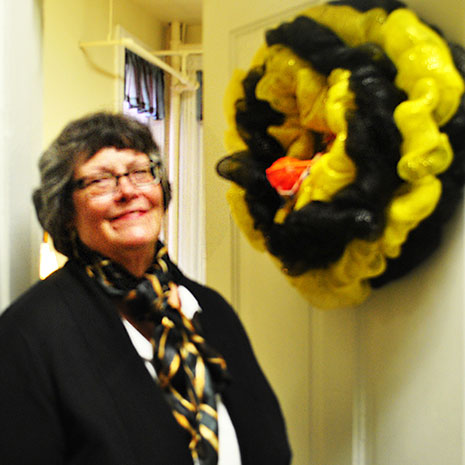 If you don’t know Su Williams, then you haven’t met the maestro. For nearly a decade, Williams has served as the senior fiscal manager at the Wilder School where her work touches nearly every aspect of the school’s academic ensemble.

Williams handles everything from state appropriated funds, to the administration of scholarships, grants and sponsored programs, monitoring the inner workings of the school’s budget with the precision of J. K. Simmons’ Terence Fletcher.

And while she doesn’t use a baton (or Fletcher’s abusive approach), so many regulations are interpreted from her snug, second-story Kearney office that it’s Williams who is often tasked with finding the harmony between the policy and the numbers.

“A lot of people miss the creativity in what I do,” Williams said.

“But as a fiscal manager, I’m using my imagination to solve a numbers puzzle every day. How do the numbers support the policy? How do we enhance the quality of student programs and services while complying with ever-changing guidelines? What do the numbers tell us that can help us to make better decisions? Every day of this job requires agility and offers a new kind of adventure. It’s difficult, but it can also be invigorating.”

Williams joined the university 39 years ago as a medical claims specialist for MCV Associated Physicians. Since then, she’s held a number of posts throughout VCU, most recently as a finance manager at the Richard T. Robertson School of Media and Culture. In 2008, Williams joined the Wilder School. She said it was the opportunity to assume a newly created position and a developing interest that attracted her to the position.

“As a fiscal manager, I’m using my imagination to solve a numbers puzzle every day. How do the numbers support the policy? How do we enhance the quality of student programs and services while complying with ever-changing guidelines? Every day of this job requires agility and offers a new kind of adventure. It’s difficult, but it can also be invigorating.”

“I really wanted to expand my expertise in grant management,” said Williams, “and doing so within a school that is very much emerging as a premier hub for research on public policy and administration has certainly made the job interesting.”

Williams’ primary role is to provide assistance to faculty, staff and students who are engaged in externally funded scholarship or research. Her job includes working with principal investigators and others to monitor expenditures and ensure compliance with contracts as well as state and federal guidelines.

It’s a job that requires attention to detail, extreme proactivity and a particular interpersonal touch.

“Working with multiple grants, contracts and payrolls is a complicated business and the rules sometimes seem frustrating. But Susan has our backs -- she cares about us and she's keeping us right with the law.  We'd be lost without her,” said John Accordino, Ph.D.

Accordino is the Director of the school’s Center for Urban and Regional Analysis and a frequent Williams’ collaborator.

Williams grew up in Henrico County and attended Smithdeal Massey Business College. She is a second-generation Ram employee with a lifelong connection to VCU. As a child, Williams visited the Office of the Provost regularly, where her grandmother, Ada Quynn, worked as an aide to Provost George Oliver.

She remains close with many of the students who formed relationships with her grandmother and who have since become like extended family. When she’s not educating faculty and staff on policy or training her eagle-eye on budgets, Williams enjoys wreath crafting and vacationing on the Florida Gulf Coast.

Williams said she enjoys the variety of her work and the diversity of people with whom she interacts.

“Here I have the opportunity to touch a little bit of everything along the way. It’s also very rewarding to have direct contact with the faculty and the students whom we serve.”