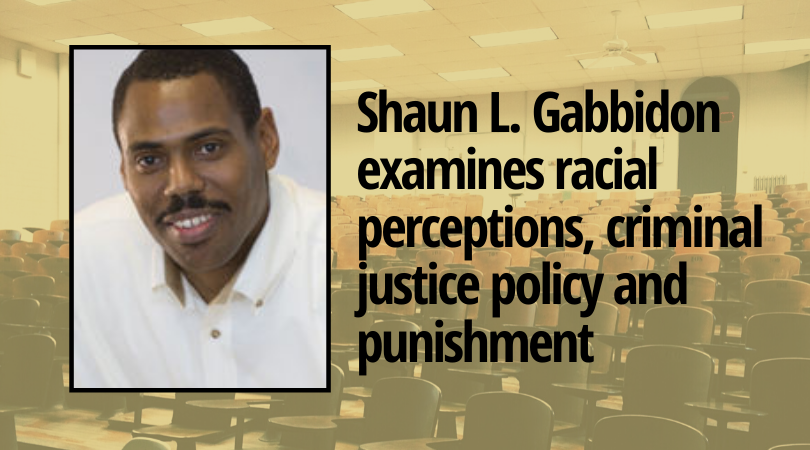 Du Bois 1904 Atlanta University Crime Poll was one of the first crime polls conducted in the United States. It investigated in great detail the perceptions of blacks and white residents on crime, specifically crime within Georgia. The study included respondents of varying age, gender and economic strata.

“Much of the data in the polls conducted in the past was relevant then and is still relevant now,” said Gabbidon.

Gabbidon addressed an audience of more than 50 students and scholars during the Wilder School’s Doctoral Lecture Series in Public Policy on October 8. The series gives students the opportunity to learn from and engage with leading scholars in a variety of fields related to public policy with a specific focus on race and social equity.

“Racial equality in terms of scholarship is something we don’t talk about but something that we should be talking about.”

Gabbidon emphasized that much of the available data on this topic dates back more than a century and is essential to providing context for the public’s views on the purpose of the law, courts, police, police treatment and why so many African Americans are ‘under the clutches’ of the law.

In Gabbidon’s first race and crime class at Coppin State University (HBCU) “African Americans and the criminal justice system,” he wanted to see how much those perceptions aligned with data. He was not surprised to find that most students believe—and continue to believe—that blacks are arrested for most crime in the United States.

“As a student, one thing you have to be mindful of is that just because people are going in one direction, it does not mean we all have to go in that direction,” he said.

“These perceptions are very powerful and dangerous. We see what we see in the justice system, especially when it comes to perceptions of crime and victimization.”

The study and findings

Gabbidon’s most recent publication, “Perceptions of Criminality and Victimization Among Pennsylvanians: Exploring Whether Racial/ethnic Minorities Get a Fair Shake” surveyed diverse residents of Pennsylvania to better understand perceptions of criminology and potential victimization in low-income diverse neighborhoods. Key findings included:

“These surveys give us some insight to exactly how some people feel and demonstrates quite clearly that very little has shifted with regard to perceptions of race and violence-proneness,” said Gabbidon.

“I have taught at both predominantly white institutions and predominantly black, but the views and perceptions typically are similar if not the same at both. This is racial history and perception has remained the same since the slave era. If you view blacks as criminals, you can keep them back.”

Although Gabbidon’s study focused on Pennsylvanians, he hopes to expand his focus to see what the results may reveal when looking at other populations.

“I predict that if I did the study in other states, we would see very similar response and that’s why this information matters when we talk about public opinion. It’s not just about how people feel about it, it’s a marker of how race relations will go in our society,” said Gabbidon.

Negative effects and how to change perceptions

Gabbidon reviewed numerous ways he believed could help to change these perceptions beginning with the incorporation of ‘Race, Ethnicity, & Crime’ courses in higher education. He also said that K-12 should invest in discussions that provide context about the justice system.

“The courses are important because teaching will provide a historical foundation of why we are the way we are today. We need more people who are conscious of what’s going on and that happens in the classroom,” said Gabbidon.

“Young Americans should not be able to go through life without understanding how the justice system has been used as well as it’s real impact on racism, criminalization and victimization.”

Perceptions built upon popular stereotypes in regards to how people dress or wear their hair are also seen as something that has been hard to overcome due to their presence in communities for so long.

Gabbidon is currently expanding his research to examine how minority perceptions may or may not have shifted due to the recent fury over black deaths caused by the police.

Gabbidon also expressed his interest in white crime and how the lack of focus on white crime is directly connected mischaracterizations of black crime and black people.

“In essence when it comes to change in racial justice or criminal justice, we are not going to get there until perceptions are changed. We can change policies, etc., but things won’t change as long as racist views are ingrained within them.”