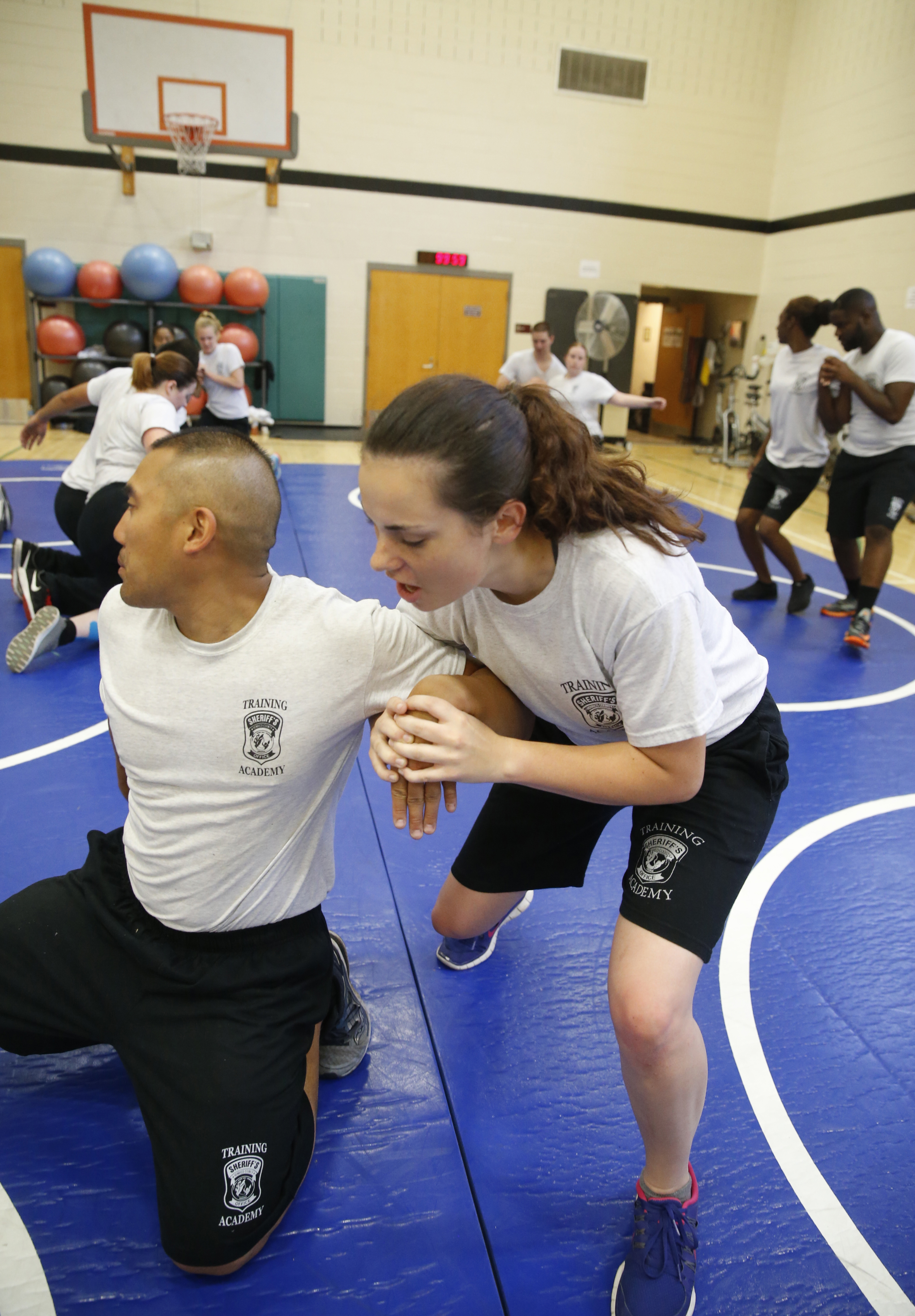 Academy recruit Taylor Lisco demonstrates how to correctly apply pressure to a wrist on a fellow recruit in order to takedown an offender during a defensive tactics course on July 13 at the Henrico County Training Center.

Agustin Hussain hopes to follow in the footsteps of his late uncle, Robert Ellis, a former Navy SEAL and narcotics detective for the Newport News Police Department.

“I’ve always been interested in law enforcement,” said Hussain, a rising senior and criminal justice major at the Wilder School. “But it was my uncle and mentor who pushed me to pursue my dream of becoming a special agent for the FBI’s counterterrorism division.”

At 22, Hussain is three years shy of the bureau’s work history requirement, so he’s doing the next best thing—he’s become a recruit for Henrico County’s Student Basic Jailor Academy.

“For many of us, corrections is a doorway into another branch of law enforcement,” said Hussain.

“This program is a no-brainer in that it will allow me to gain sworn law enforcement experience before graduation. It’s an edge that I know very few of my peers will have.”'

Hussain is one of 16 Wilder School students nearing completion of the academy, a rigorous nine-week program that allows junior or senior-level criminal justice students to earn college credit and become certified as correctional deputies by the Virginia Department of Criminal Justice Services.

“For many of us, corrections is a doorway into another branch of law enforcement. This program is a no-brainer in that it will allow me to gain sworn law enforcement experience before graduation. It’s an edge that I know very few of my peers will have.” - Agustin Hussain

On August 4, Hussain and 20 members of his recruiting class took an oath of office before family and friends and received their certification as correctional deputies during a graduation ceremony at the Henrico Theater.

Afterward, recruits will join the ranks of the 391 deputies as part-time employees working in one of the county’s two jails, where they will be responsible for the supervision of a daily adult offender population of approximately 1,200.  It’s a job for which recruits say they are now prepared.

Ask 20-year old Taylor Lisco, a junior from Fredericksburg, what she’s gotten out of the academy and she’ll tell you: “Proof that I don’t belong behind a desk and the confidence to conduct myself in any environment.”

As a recruit, Lisco faced eye-searing pepper spray, endured grueling drills in 95-degree weather and learned to “snap and roll,” a challenging evasive driving technique used to maneuver around obstacles during high-speed pursuits.

“The training the Student Basic Jailor Academy provides is second to none,” said Lt. Steward Prentis, a commanding officer with the academy and a veteran corrections officer with more than 20 years of experience.

“Recruits undergo a mix of more than 300 hours of classes and demonstrations on a range of topics from inmate supervision to defensive tactics, mental health, weapons and chemical munitions. Our instructors do everything they can to test their will and teach them how to handle the toughest criminals behind bars,” he said.

That hands-on instruction is complimented by an eight-week online course, Jails and Issues in Short-Term Detention, taught by Blythe Bowman, Ph.D., an associate professor of criminal justice at the Wilder School. 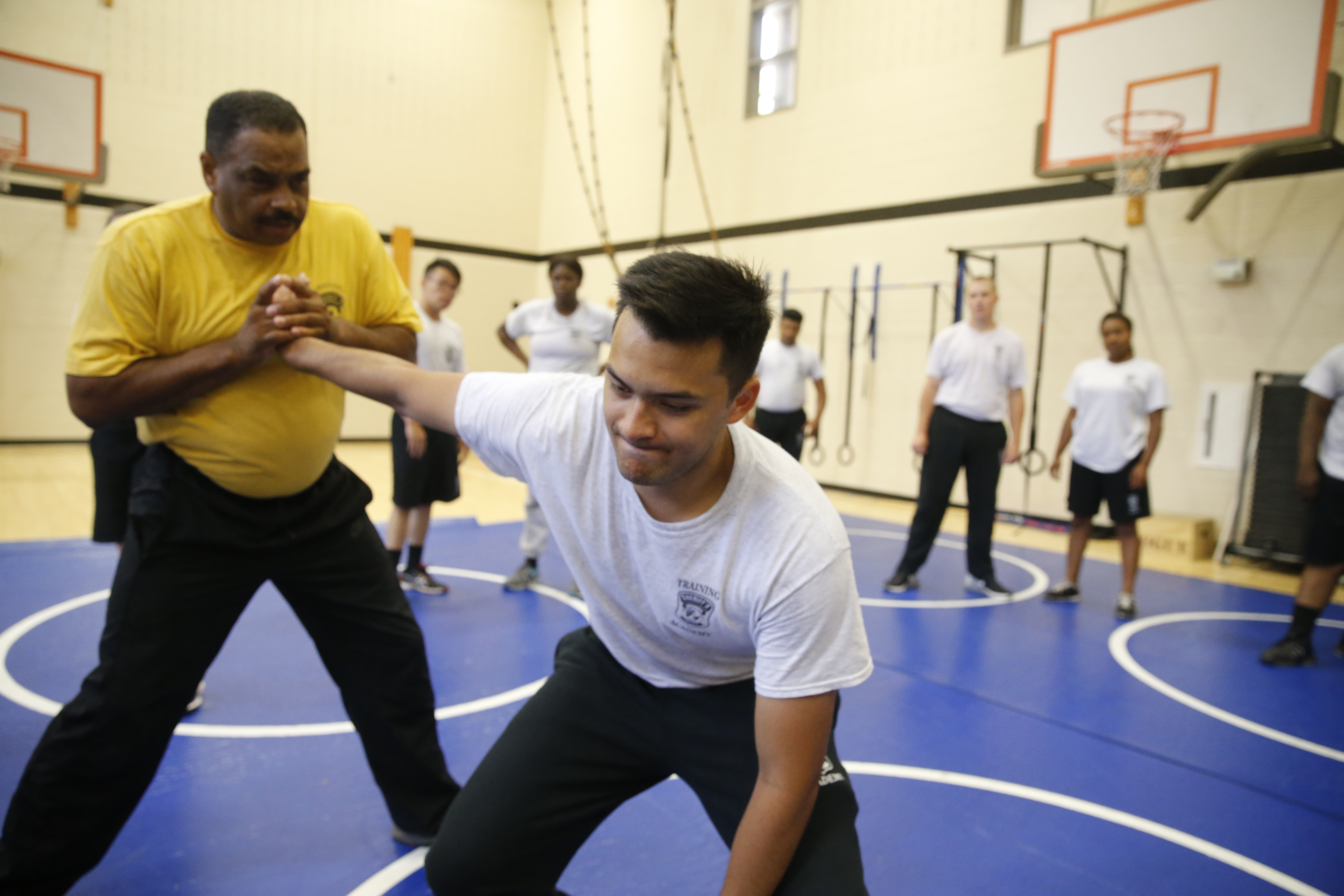 “Overall, what students take away from the classroom component is a deeper understanding and appreciation of the uniqueness of the jail environment, the diverse jail population it serves and the challenges of working with both,” said Bowman.

For Lisco, who hopes to become a special agent for one of the nation’s 100 federal investigative agencies, the experience has been life-changing.

“My greatest fear when I entered the academy was that I wouldn’t have the confidence to act in an environment in which the lives of inmates and officers are at stake,” Lisco said.

“Instead I learned to be prepared for anything. Overnight, you begin to trust yourself and the officers around you. ”

Trusting others wasn’t second nature for Lisco, who likened the fear of friending fellow recruits to the anxiety of fitting in at summer camp.

She was pleasantly surprised to learn that no matter how different her classmates may appear, “they are all part of a fraternity of super-heroes, who want to do amazing things to help people.”

That shared sense of purpose combined with the intense camaraderie formed through weeks of challenges, gave Lisco something she never expected: “20 brothers and sisters who I know I can count on to walk with me into danger.” 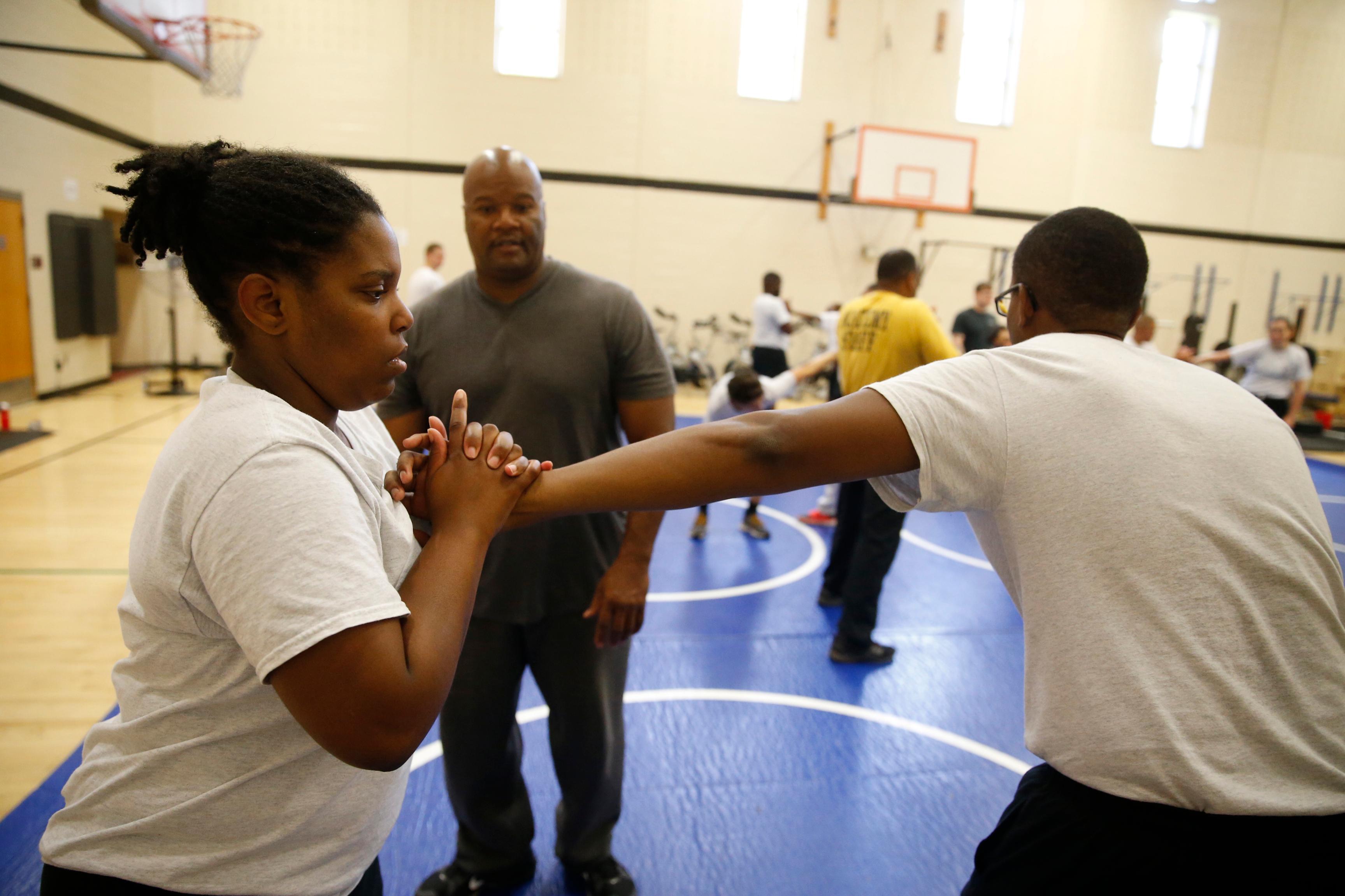 Chelsea West, a senior from Richmond, said the academy has given her a keener sense responsibility.

At a time of rising concern over attacks on law enforcement, West is very aware of both her power and vulnerability as a corrections officer.

“It makes this an especially challenging time to be entering the field.”

She cited the professionalism of her seasoned instructors as one of the greatest benefits of the academy.

“A big part of the academy is teaching recruits to treat everyone with respect. Our instructors are constantly reminding us that offenders are real people—that their crimes have not deprived them of their humanity,” West said.

“By being firm, fair and consistent, we’re trained to show respect. And, by exhibiting that behavior, we create an atmosphere in which we are deserving of that respect—both from offenders and the public that we serve.”

“A big part of the academy is teaching recruits to treat everyone with respect. By being firm, fair and consistent, we’re trained to show respect. And, by exhibiting that behavior, we create an atmosphere in which we are deserving of that respect—both from offenders and the public that we serve.”   —Chelsea West

Ahead of the Pack

Born out of a concern over rising overtime costs, the initiative was the brainchild of Henrico County Sheriff Michael Wade (B.S.’86/M.S.’90).  In 2010, Wade approached criminal justice faculty members at the Wilder School to develop a program that would help to defray the costs of maintaining state required inmate-to-officer ratios and produce better educated, more career-oriented criminal justice graduates. In 2011, the sheriff’s office launched the academy, the first such university-community partnership in Virginia.

In the last five years, the initiative has proved hugely successful:  In 2012, the academy expanded to include criminal justice students from Virginia Union University and cumulatively, the program has produced nearly 200 certified correctional deputies and generated an estimated $1.25 million in taxpayer savings.

“Of course, we think the academy has emerged as an exciting exemplar of how a community-university partnership can be used to solve problems,” Bowman said.

“Nonetheless, from our perspective, its greatest contribution lies in the invaluable opportunity it provides for our students.  At the Wilder School, we see programs like these as a cutting-edge approach to education and a prerequisite to responsible practice.”

Bowman was one of the founding faculty members of the academy. She helped to design the curriculum based in part on her experiences as a new correctional employee in a local jail in Omaha, Neb.

Bowman tells her students that wherever they end up working in criminal justice, their client, for better lack of a word, is the offender.

“Whether you become a police officer, investigator, judge or attorney, you have to get used to and become comfortable with working offenders.  One of the safest places to get that experience is in a safe, and controlled correctional setting like a jail. Corrections can provide a tremendous source of perspective to any law enforcement professional.”

That perspective, said Bowman, has offered considerable advantages to previous academy graduates who have been “snapped up” by numerous local, state and federal agencies in the next rung on their career ladders.

She said this is particularly true for students who are seeking entry-level careers in the intensely competitive branch of federal law enforcement.

“It isn’t enough to be a criminal justice major if you want to work for the FBI. Agencies are looking for people who speak Farsi or have an accounting background. In a market saturated with majors, it’s incredibly important to distinguish yourself.

“That’s why,” said Bowman, “programs like the Henrico Student Basic Jailor Academy have placed our students ahead of the pack. Even in the most competitive of circumstances, who can compete with you if you are a 21-year-old college graduate with two years of sworn law experience under your belt?”

For Lisco, who gave up the chance to tan at the beach this summer and $685—fees cover the costs for uniforms and ammunition required for training—to become a recruit, it’s a gamble that she feels has already paid off.

“I know attending the academy was the right decision,” Lisco said. “Because at a time when most of my friends are still working retail or enjoying vacation, I can proudly say that I am now one of Henrico’s Finest.”