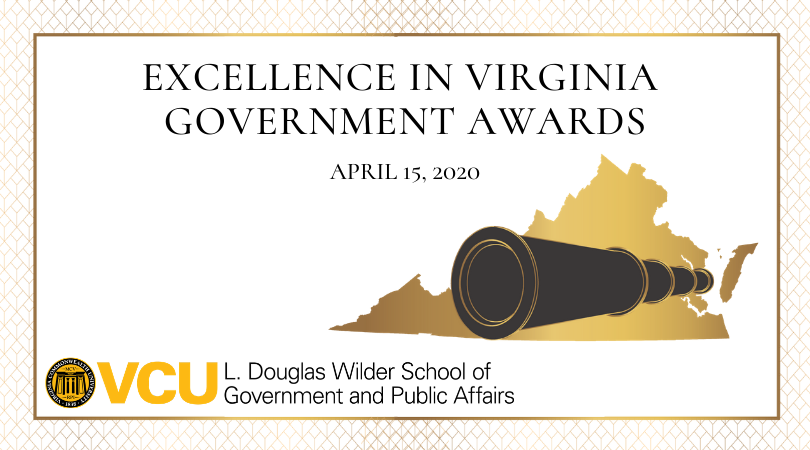 The L. Douglas Wilder School of Government and Public Affairs at Virginia Commonwealth University will honor individuals and organizations who have made noteworthy contributions to the practice of government and the betterment of the state on Wednesday, April 15, 2020. Dominion Energy is the event’s 2020 Title Sponsor.

The L. Douglas Wilder School of Government and Public Affairs at Virginia Commonwealth University will honor individuals and organizations who have made noteworthy contributions to the practice of government and the betterment of the state on Wednesday, April 15, 2020. Dominion Energy is the event’s 2020 Title Sponsor.

The 14th Excellence in Virginia Government Awards program, a signature event of the Wilder School, will take place during a luncheon ceremony at the Richmond Marriott, 500 E. Broad St. “These awards recognize outstanding work at all levels of government in Virginia and honor dedicated public service, innovative approaches and commitment to excellence,” said Susan T. Gooden, Ph.D., interim dean of the Wilder School. "This year's recipients have made tremendous impacts on our communities and the Commonwealth."

Tickets for the luncheon are $75 per person, and sponsorship opportunities are available. Proceeds from the event help fund scholarships for Wilder School students. If you are interested in sponsorship opportunities, please fill out the EVGA 2020 Sponsor Form or if you have questions, please contact the Wilder School’s Director of Development James Wasilewski at wasilewskijr@vcu.edu or (804) 828-6205.

Register here or contact Katherine Huynh at (804) 827-0867 or huynhkp@vcu.edu for information or special accommodations.

The 2020 EVGA Honorees are as follows:

The Lifetime Achievement Award recognizes an individual Virginian whose career represents the highest values of public service and citizenship and who has made a substantial contribution to the good of the commonwealth.  As the first African-American elected to Congress from the Commonwealth since Reconstruction, Congressman Robert C. “Bobby” Scott has spent more than four decades in public service.  Before being elected to Congress in 1992 to represent the 3rd District, Scott served for 15 years in Virginia’s General Assembly in both the House of Delegates and State Senate.

Named for two champions of civil rights, attorney Oliver Hill and Judge Spottswood Robinson, the Hill-Robinson Expansion of Freedom Award recognizes a sustained commitment to securing equal rights and justice for all people by empowering citizens.  Fifty years ago, Virginia voters resoundingly endorsed a new state Constitution, one that enshrined hard won civil rights protections and voting rights, constitutionally committed the state to educational equality, and included stewardship of natural resources as a constitutional obligation.  The principal drafter of the new Virginia Constitution was a young law professor at the University of Virginia, A.E. Dick Howard.  In the ensuing years since the ratification of Virginia’s Constitution, Professor Howard has consulted with constitution-makers around the world, including Hungary, Poland, Czechoslovakia, Romania, Albania, South Africa, Malawi, Brazil, and the Philippines.

The Grace E. Harris Leadership Award recognizes an individual Virginian whose career represents the highest values of public service and citizenship and who has made a substantial contribution to the good of the commonwealth and the community.

The Unsung Heroes Award recognizes an individual Virginian who has provided distinguished and exceptional service as a career government employee in the commonwealth, with local or state government. For more than a decade Cristina Ramirez has worked to bring awareness, visibility and promote services to the Latino/Hispanic/Spanish speaking communities in central Virginia.  Ramirez has presented at conferences, published academic books and served as a consultant on Diversity, Equity and Inclusion issues.  As a librarian in Henrico County, she works to bring inclusion of Latino youth into library services and programs and to promote literacy and writing amongst Latino youth.

The Community Enhancement Award recognizes outstanding commitment to improving the quality of community life in Virginia through an established reputation for exceptional community service. Formerly known as the Fan Free Clinic, Health Brigade is celebrating 50 years of providing exceptional health services to those least served in a caring and non-judgmental environment.  Health Brigade is open to the people of Richmond and 22 surrounding counties, serving not only those with limited resources, but also those often stigmatized or experiencing systemic oppression.  Today they serve close to 11,000 individuals annually through primary medical care, mental health and wellness services, HIV/STI testing, and outreach and education.

This award recognizes the recipient’s inventive creation or maintenance of a successful public-private partnership which has delivered a measurable improvement in public service resulting in lower cost, improved quality, or greater efficiency for citizens.  The Virginia Housing Development Authority (VHDA) is a public-private organization established by Virginia’s General Assembly in 1972 to help all Virginians attain quality, affordable housing. VHDA fulfills its mission by partnering with the greater housing community to offer programs, products, services and expertise that address the evolving spectrum of homeownership, rental and supportive housing needs. VHDA is unique as a housing authority—relative to peers that serve the same constituencies—as it is fully self-funded through revenues generated by its programs, rather than state appropriations. This novel funding structure enables VHDA to maintain the agility necessary to align its programs with state priorities, effectively respond to threats like the 2008 Financial Crisis, reinvest in its mission, and innovate.

This award recognizes the recipient’s innovative work that has resulted in increased efficiency, effectiveness, or other improvements that affect how a government entity performs in delivery of service to its constituents.  The Department of Juvenile Justice (DJJ) has 5,000 youth under some kind of supervision with more than 90 percent of those youth being supervised in their communities through diversion, probation or parole. Beginning in 2014, the Department underwent a rigorous self-analysis to examine whether they were using taxpayer resources effectively, and getting the outcomes they want for the youth, families and communities they serve.  The resulting Transformation Plan touched virtually every aspect of the agency’s operations and has yielded dramatic gains that have resulted in positive outcomes for the youth and families served by DJJ including a reduction in the number of youth incarcerated in state correctional centers and education and treatment gains for youth in secure custody and high school graduation.