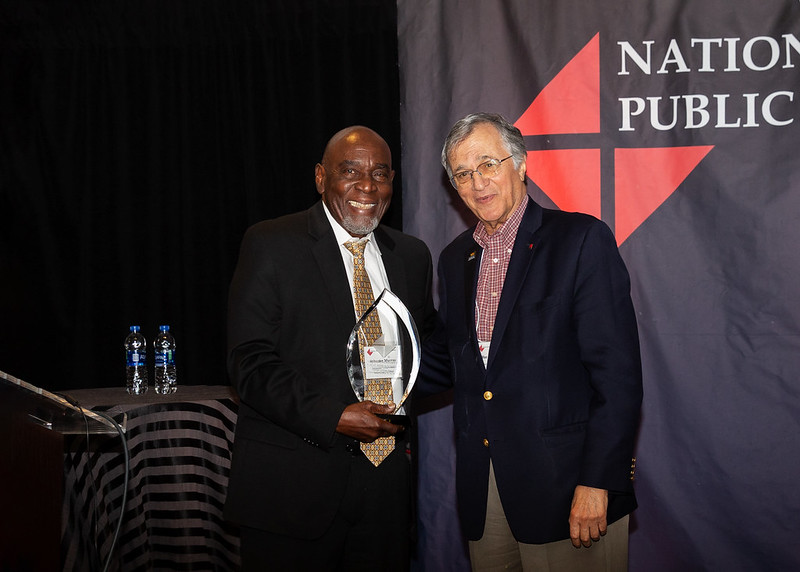 Wilder School Professor Emeritus Blue Wooldridge has been awarded the 2019 George Graham Award for Exceptional Service from the National Academy of Public Administration. Established in 1967, NAPA is a congressionally chartered non-profit that provides expert advice to government leaders in building and managing more effective, efficient, accountable and transparent organizations.

Wooldridge received the honor during a luncheon and ceremony held earlier this month during NAPA’s fall meeting. Named for the academy’s first president, the George Graham Award recognizes sustained and extraordinary contribution towards making NAPA a stronger and more respected organization. Election as a fellow follows a rigorous selection process and represents the highest honor that can be bestowed upon a public administration scholar or administrator. Nationwide, fellows include an accomplished range of individuals from prominent academics to congressional members and business executives.

“Supporting the work of the academy has been an honor and a privilege,” Wooldridge said.  I am humbled and grateful to the fellows for this recognition.”

Wooldridge was elected a NAPA Fellow in 2009 and has served as a member of NAPA’s Board of Directors as well as the academy’s executive committee. He also served as the chair of the Standing Panel on Society Equity in Governance for nine years at the academy and has participated in numerous project panels, committees and special projects promoting international engagement, including the development of the Africa Working Group, a subset of NAPA’s International Standing Panel.

Wooldridge retired in May of 2019 following 31 years of exemplary service to Virginia Commonwealth University. Prior to working in academia, he was a professionally trained physicist who spent nearly a decade in public service as a budget analyst and program manager.

For years, his colleagues wrote in their letter of nomination, Wooldridge has been the driving force behind NAPA’s involvement in social equity issues, through presentations, committee work, panel leadership and persistent reminders.

“Blue has consistently worked for the betterment of the academy and the society at all levels.  His indefatigable energy, moral courage, dedication to social justice, and success in changing attitudes for the better exemplify the principles on which the academy was founded, and we believe he is more than worthy of being named the next George Graham Award recipient.”

Wooldridge’s nomination was supported by nine colleagues from institutions around the country. He is one of three NAPA Fellows to serve on the Wilder School faculty. He is joined by his colleagues Distinguished Professor L. Douglas Wilder and Interim Dean Susan Gooden.