In Buenos Aires, a VCU Gilman Scholar is Learning How to Build Better Cities 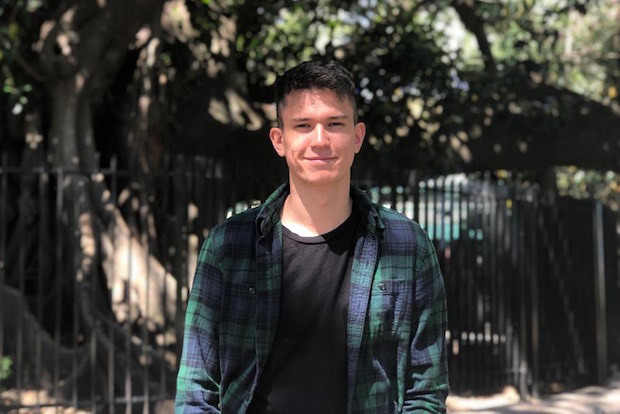 Elias Frantz’s interests in Latin American studies and urban planning have taken him to Argentina, where he is working to help develop a local neighborhood.

Elias Frantz grew up in Bogotá, Colombia, and frequently rode the city’s massive bus rapid transit system to visit his grandparents. It was an early introduction to urban design and public transportation, and when Frantz enrolled at Virginia Commonwealth University in 2017, he decided to study urban planning.

“I would use the bus rapid transit system pretty regularly,” said Frantz, now a sophomore in the L. Douglas Wilder School of Government and Public Affairs. “I also remember, every Sunday in Bogotá, they close the major roads in the city and allow bikes to use them. That was a big thing my family would do. It wasn’t until I started learning more about urban planning that I had an awareness that these were really cool things my city has done.”

Now Frantz is combining his passions for urbanism and Latin American cities in Buenos Aires, Argentina, on a study abroad through the U.S. Department of State’s Benjamin A. Gilman International Scholarship program, which provides funding for college students to study outside the United States. Frantz, one of five VCU students currently studying abroad on Gilman scholarships, is taking classes in Latin American and Argentine studies at the University of Belgrano and working with a local neighborhood to help develop and connect it with the rest of the city.

“My passion for urban planning and my studies always led me back to Latin America and the problems people face, particularly in cities in Latin America,” Frantz said. “The program I’m doing is integrated [with urban planning] because we’ll be talking about the city a lot, about politics a lot — so not directly urban planning but a lot of things related to it. It’s really exciting to be able to see the perspective in another city, another country.”

Frantz has experienced that change in perspective before. He enrolled at VCU as Richmond was constructing the Pulse, a bus rapid transit system and the city’s first public transportation expansion project in decades. He said the Pulse is a good first step as Richmond attempts to make itself a more affordable, walkable, connected place to live.

“It was really cool to see the way the Pulse was happening in Richmond,” Frantz said. “I had lived this before and I heard friends complain about taking away a lane on Broad [Street] and I said, ‘Just try it. It’s actually really great.’ People don’t realize that until they start using it. Bringing equality through transportation — saying people who ride the bus deserve a lane — is a good thing. And I think Richmond is doing some other new things that are good, too, like transit-oriented development in places like Scott’s Addition.

Frantz will apply those concepts in Buenos Aires, where, to further blend his classes in Latin American studies with his interest in urban planning, he has secured an internship through the Ministry of Education to help develop a dense shantytown in the city. The neighborhood, Barrio 31, is largely informal and cut off from many core municipal services, Frantz said.

“The streets don’t have names, it’s where people have built their homes from scratch, something that happens a lot in cities in Latin America — in Bogotá, Brazil, Peru and Argentina,” he said. “I will be working with data to help determine where to put schools, hospitals, clinics, a police station, and how to help formalize the neighborhood while also serving the neighborhood as much as possible.”

Frantz arrived in Buenos Aires two weeks ago and will study and work in the city through mid-June. He said he is excited to add another layer to his understanding of how cities solve their problems.

“I’m so excited to start my classes and internship and to see more of the city. It’s going to be great.”