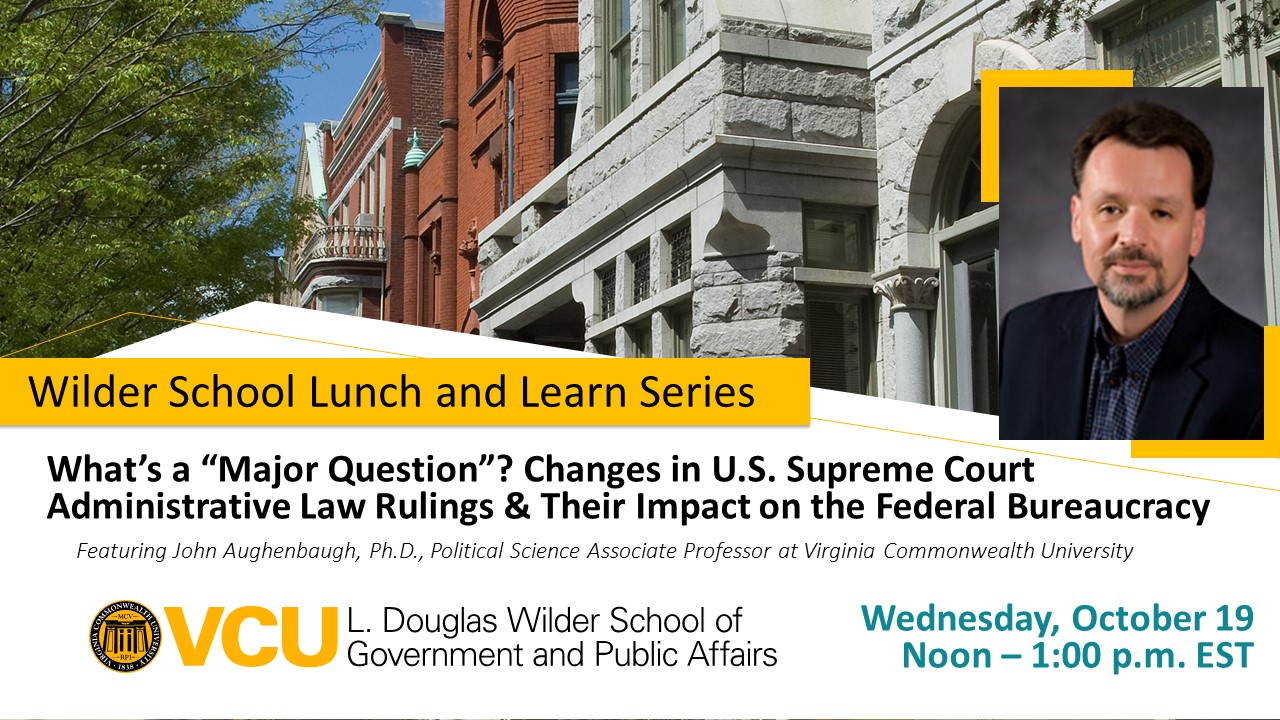 In recent U.S. Supreme Court terms, the Court has used the major questions doctrine to invalidate executive branch policy initiatives. In this month's Lunch and Learn, Dr. John Aughenbaugh from VCU's Political Science Department will discuss what the major questions doctrine is and how the doctrine might impact federal government executive branch policy initiatives in the future.

Aughenbaugh is a frequent lecturer on the organizational dynamics of courts and their effect on public administration.  He has written about the federal courts’ impact on the work of bureaucrats, public administration service learning, as well as state research and development tax credit programs. This timely discussion will be moderated by RaJade M. Berry-James, Ph.D.

The event will be recorded and shared through email and the Wilder School YouTube channel.

Aughenbaugh teaches a wide array of American political science courses at VCU, including: Constitutional Law, Courts and Politics, Public Administration and Policy, Administrative Law, Introduction to U.S. Government, and Politics in Film. He has been nominated for and won a number of teaching awards and is frequently asked to comment and has presented lectures on various topics in American political science – especially administrative and constitutional law and the courts. Aughenbaugh also records a podcast with VCU Librarian Nia Rodgers entitled Civil Discourse regarding government documents and related political phenomena.

RaJade M. Berry-James, Ph.D., is senior associate dean of faculty and academic affairs in the L. Douglas Wilder School of Government and Public Affairs at Virginia Commonwealth University.  Dr. Berry-James is an elected fellow of the congressionally chartered National Academy of Public Administration (NAPA) and Vice Chair of the Standing  Panel on Social Equity in Governance. She has spent more than 30 years in higher education, having served as Chair of the Faculty, MPA Coordinator, Ph.D. Coordinator, and Director of  Graduate Programs for small, large and research-intensive graduate programs. She is also a consultant, specializing in diversity, equity, and inclusion as well as assessment and accreditation in higher education.