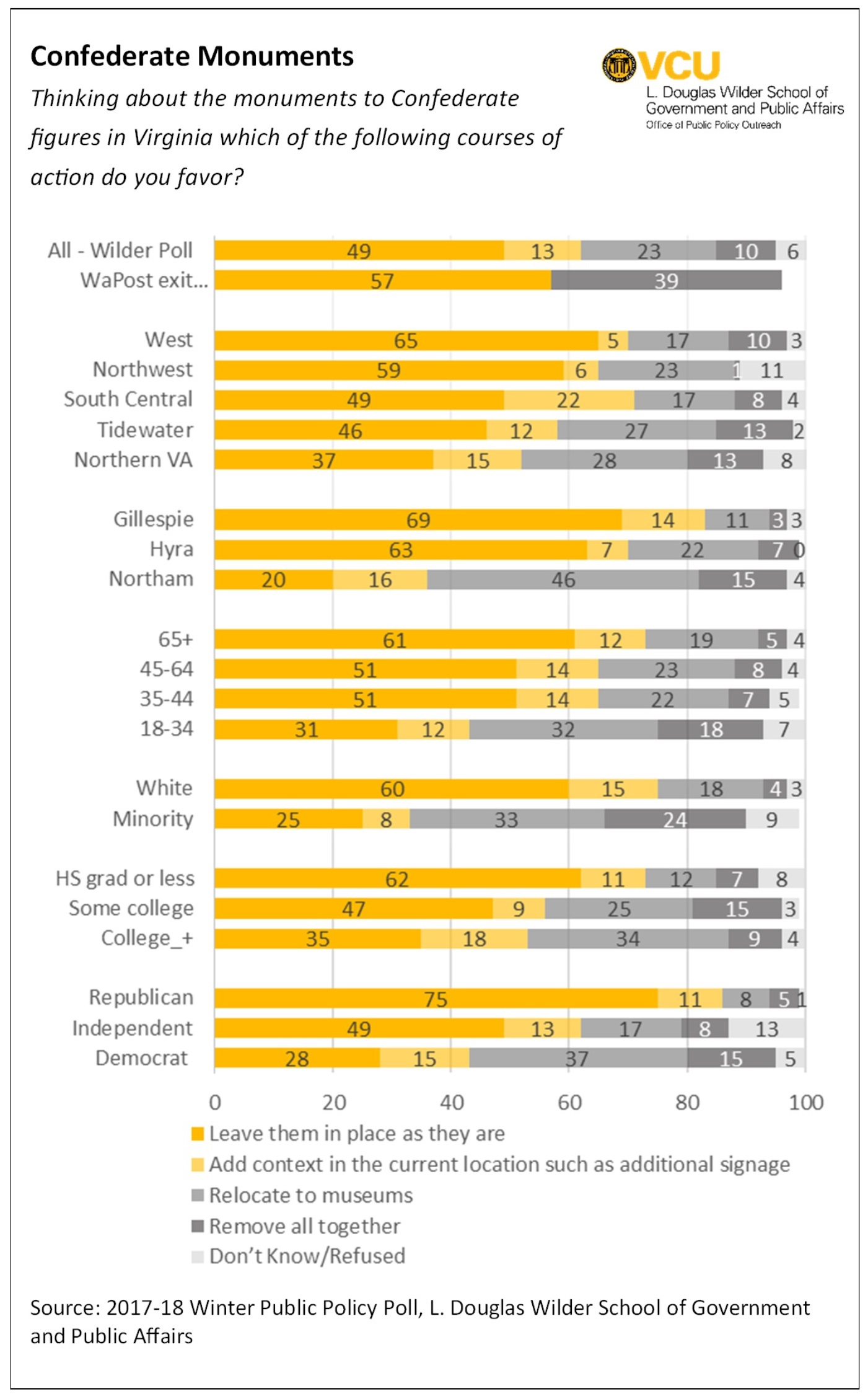 Virginians are split over what course of action to take with Confederate monuments, according to a new poll by the L. Douglas Wilder School of Government and Public Affairs at Virginia Commonwealth University.

A plurality of 49 percent of adult state residents favor leaving Confederate statues in place as they are, while 46 percent favor some type of change. But those supporting changes are far from united — 23 percent of those surveyed favor moving the statues to museums, 13 percent favor adding context in the current location such as additional signage, and 10 percent favor removing the statues, according to the Winter 2017-18 Public Policy Poll conducted by the Wilder School’s Office of Public Policy Outreach.

“Many surveys have simply asked folks whether they favor monuments being removed or left in place,” said Robyn McDougle, Ph.D., director of the Office of Public Policy Outreach. “Providing respondents additional options that range between those two choices gives policymakers important information about the nuances of public opinion on the issue. Our poll shows that a portion of each side on the issue would prefer options like additional signage in their current location or removal to a museum.”

The poll, a random sample of 788 adults in Virginia conducted by landline and cell telephone from Dec. 8-26, has a margin of error of 3.49 percentage points.

Significant differences of perspective exist along key demographic categories with Republicans, white respondents, those with a high school diploma or less of education, and those age 65 and older significantly more likely to favor leaving monuments in place.

Regionally, those in the West (65 percent) and Northwest (59 percent) were more likely to favor leaving monuments in place without any changes than those from Northern Virginia (37 percent).

Likewise, of those in the poll who reported their choice in the 2017 gubernatorial election, 69 percent of voters who supported Republican Ed Gillespie want the monuments to remain as they are, compared to only 20 percent of those who backed Democrat Ralph Northam. However, a plurality of Northam voters (46 percent) prefer relocation of the monuments to a museum, compared to only 15 percent who want to see complete removal.

While no consensus exists on what to do with Confederate monuments, a large majority of the overall respondents (76 percent) are unwilling to pay for any changes to the monuments through increased taxes. Twenty-one percent would be willing to pay more in taxes to pay for changes or removal.

Those most frequently willing to pay are the 10 percent who favor complete removal — 63 percent of that group expressed willingness to pay more in taxes. Younger, more educated, and minority respondents were significantly more likely to be willing to pay more in taxes, though in no category was a majority willing to do so. Regionally, Northern Virginia led in willingness to pay higher taxes (31 percent) compared to the Northwest (9 percent) and West (7 percent).

For a PDF of the 13-page report including complete question wording and detailed tables of results, go to http://wilder.vcu.edu/office-of-public-policy-outreach/

On Tuesday, Jan. 16, the Wilder School’s Office of Public Policy Outreach will release further poll results measuring Virginians’ views on issues of public safety, economic development, and K-12 and higher education. The Wilder School released its first poll results on Jan. 5 showing that more than one in five voters in Virginia’s recent gubernatorial election say they made their decision in response to the Trump administration.