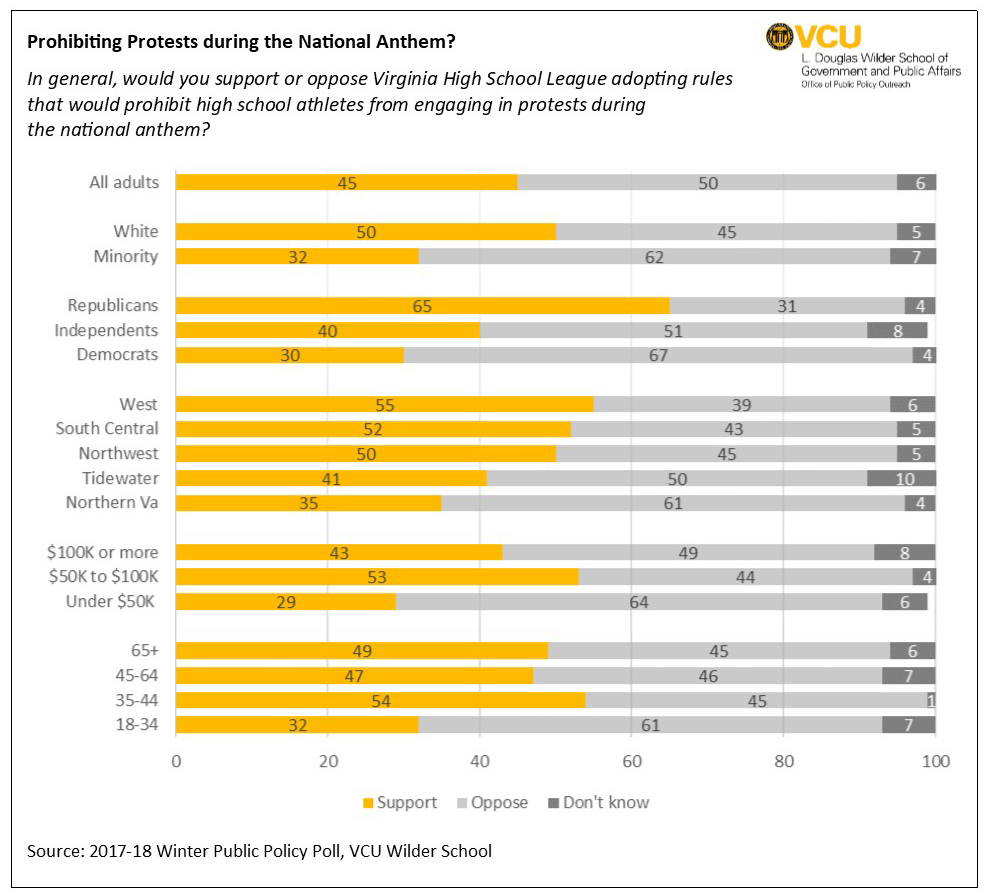 As National Football League players continue to sit or kneel in protest during the national anthem, a new poll by the L. Douglas Wilder School of Government and Public Affairs at Virginia Commonwealth University shows that Virginians are almost evenly divided on whether they would support a rule prohibiting high school athletes from engaging in similar protests.

Fifty percent of respondents opposed adopting a rule that would prohibit protests, while 45 percent would support adopting such a prohibition, according to the 2017-18 Winter Policy Poll conducted by the Wilder School’s Office of Public Policy Outreach. The poll, a random sample of 788 adults in Virginia conducted by landline and cellular telephone from Dec. 8-26, has a margin of error of 3.49 percentage points.

“No legislator or Virginia High School League official has proposed such a rule,” said Robyn McDougle, Ph.D., director of the Office of Public Policy Outreach. “But the national debate on the issue led us to measure public opinion on the hypothetical question and it shows that any such proposal would be controversial, especially in Northern Virginia and for nonwhite Virginians.”

Perspectives on the issue were significantly different regionally. Northern Virginia had the highest portion (61 percent) opposed to adopting such a policy, while those opposing a ban on protests were in the minority in three regions — the West (39 percent); South Central (43 percent); and Northwest (45 percent).  Half the respondents in Tidewater were opposed.

The same poll contained numerous other findings regarding public opinion on a range of issues, including responses to the opioid crisis. Expansion of community-based treatment centers and housing for recovering users are strategies shown by the poll to have majority support while the public is evenly split on a policy of providing clean needles to reduce the risk of opioid users spreading infection.

Questions also probed the public’s willingness to pay more in taxes to increase funds for higher education (43 percent willing) and whether that willingness changes based on whether the increased funds were designated for reducing tuition for in-state students.

For a PDF of the 58-page report, including complete question wording and detailed tables of results, go to www.oppo.vcu.edu.

On Jan. 5, the Wilder School released its first poll results showing that more than one in five voters in Virginia’s recent gubernatorial election say they made their decision in response to the Trump administration. On Jan. 9, the Wilder School released results showing that 49 percent of Virginians prefer Confederate monuments be left as they are and 76 percent would be unwilling to pay more in taxes to fund any changes to the monuments.

About VCU and VCU Health

Virginia Commonwealth University is a major, urban public research university with national and international rankings in sponsored research. Located in downtown Richmond, VCU enrolls more than 31,000 students in 220 degree and certificate programs in the arts, sciences and humanities. Seventy-nine of the programs are unique in Virginia, many of them crossing the disciplines of VCU’s 13 schools and one college. The VCU Health brand represents the health sciences schools of VCU, the VCU Massey Cancer Center and the VCU Health System, which comprises VCU Medical Center (the only academic medical center and Level I trauma center in the region), Community Memorial Hospital, Children’s Hospital of Richmond at VCU, MCV Physicians and Virginia Premier Health Plan. For more, please visit www.vcu.edu and vcuhealth.org.