An Immigrant’s Story of Safety and Opportunity 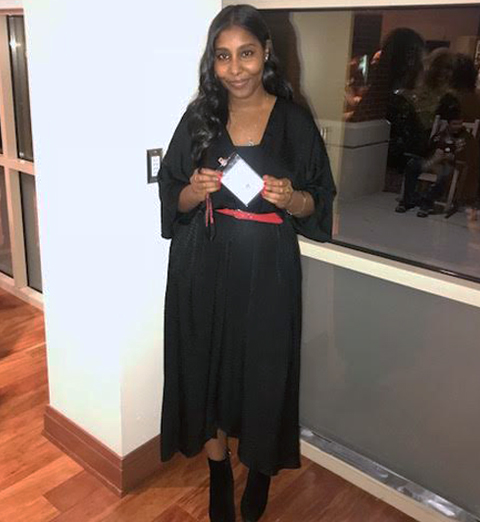 Mona Elrayah is a second-year Wilder School M.P.A. student who recently shared her experiences as an immigrant at a TEDxYouth@RVA talk.

When Mona Elrayah looks into the faces of the immigrant middle school students where she volunteers, she sees herself.

The native of Sudan remembers what it was like to be new—not only at a school, but to a language, culture and country, and what it’s like when you don’t feel you fit in.

Elrayah, a second-year student in the Wilder School’s Master of Public Administration program,  works with 35 immigrant and refugee students at the STAR after-school program (Strengthening Teens Academically and Recreationally), run by the Tuckahoe YMCA in Henrico County. The program partners with Quioccasin Middle School.

Some students, even after they go on to high school, still come to the program to hear a friendly voice and get advice from someone who’s walked in their shoes. “I want these kids not to have the same fear that I did,” she said.

Elrayah shared her inspirational and remarkable story at a TEDxYouth@RVA talk last month, calling attention to the successes of—and the crisis facing—refugees and immigrants in this country. Someone—she doesn’t know who—nominated her to speak. She was overwhelmed by the outpouring of support and many emails she received after her talk, “An Immigrant’s Story of Safety and Opportunity,” especially from fellow immigrants.

“One girl came up to me after my talk and said, ‘I thought I was the only one who felt that way,’ “ she said. “People were thanking me for sharing my story.”

Elrayah was born in Egypt, where her family lived while her father was stationed there with the Sudanese military. At the age of 2, her family moved back to Sudan. But political unrest roiled the nation, and her father was arrested and served nearly five years in prison for his opposition to the government.  As the country became more dangerous, the family left for the United States.

They ultimately settled in Virginia, where she started elementary school in Alexandria.  She didn’t feel as though she fit in.

“People thought I looked different,” she said. “I never understood how that was. I felt uncomfortable, like I stood out.”

Her discomfort grew after 9-11.

Kids at the age can be really cruel, she said.

“I closed off a portion of me. It was hard to fit in. 9-11 had just happened. It was scary letting people know where I was from.”

In high school she began to open up a little more, and felt more at ease when she arrived at VCU in the fall of 2011 as a freshman. Four years later she graduated with a degree in political science and sociology.

Meanwhile, Elrayah heard about a program aimed at helping incoming citizens, refugees and immigrant children and wanted to volunteer.

“My mind immediately took me back to my teenage years and a deep connection was made,” she said. “I’m able to work with children who remind me of my middle school self.”

The students come from across the world, many from war-torn or famine-stricken countries that they were forced to flee. She helps them with their homework, their English and perhaps most importantly, feel at ease.

She and other volunteers introduce them to opportunities that they might not have had in their native countries. Last year, the program received a grant that allowed the group to go on field trips to area attractions.

“Some of the kids had never even been to a park,” she said. “Everything is brand new to them. It’s amazing to see their progress.”

When she graduates this spring, she wants to work in civil service or nonprofits “because I want to help people,” she said. “I love how the professors at the Wilder School are so passionate about what they teach.”

Richard Huff, Ph.D., chair of the M.P.A. program, called Elrayah a caring and empathic person and “a terrific student.

“Watching this talk gave me an appreciation for the level of commitment and passion she has for working with immigrant youth,” he said. “Her work and advocacy are admirable.  She is a great representative of the M.P.A. program and Wilder School.  I am really proud of her.”