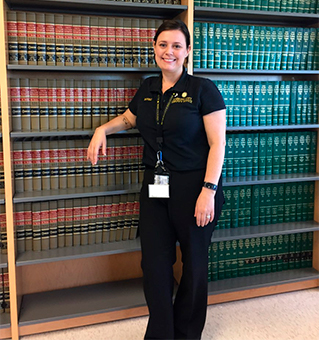 Adapted from the May 24, 2017, edition of the Richmond City Sheriff’s Office Newsletter

It may seem strange to go from archeology to criminal justice, but not to Blythe Balestrieri, associate professor of Criminal Justice at the Wilder School. "Dr. Blythe, as she is known in the Richmond City Sheriff’s Office family, was recently the recipient of the President’s Award from the Virginia Association of Regional Jails and is the law librarian for the Richmond City Sheriff’s Office. She came on board in January 2012, but before she chose the field of criminal justice as her career, she was participating in archeological excavations in Greece and living in Italy.

“I went to graduate school at the University of Iowa, and after that, I moved to Italy for about three years,” she explained. “The kind of archaeology that I focused on was specialization in human skeletal remains, and most of the excavations that I participated in were Greco/Roman locations.” But her job didn’t always deal with the historical past. “Because I had a background in human skeletal biology, when current remains were found, I and others I worked with would often be called on in a forensic capacity to assist in identifying the body in question. That was when I became interested in forensics – but I saw my first dead body and thought, ‘Nope, this is not for me’.”

Halfway through her doctorate in classical archeology, Balestrieri decided to reverse course. “Classical archeology was extremely interesting, but there was nothing about that profession that was particularly public service-oriented. So much of archeology is kept mostly within the archeological community – there was little to no public impact in what I was doing, and I wanted more.” She took a chance and applied to the University of Nebraska at Omaha, one of the top 10 criminal justice schools in the world. “I had absolutely no background in criminal justice, but they saw that I had a thorough background in scholarship; I knew how to research and how to be rigorously detailed.”

In December 2008, she graduated and by January 2009, she’d been offered a job at Virginia Commonwealth University. “It really was my dream job,” Balestrieri said. “Being in the state capital with Washington D.C. only a few hours away, and having a job at such a prestigious university for criminal justice – I actually canceled all of my other job interviews when I got the offer to come to VCU.”

Working at the RCJC gives Balestrieri a chance to complete her trifecta – teaching, researching and practicing criminal justice. “The law library allows me to assist residents in their legal research. Most residents don’t understand court procedure, criminal procedure, they don’t understand the charges that they’ve accrued. This allows me to empower them to educate themselves so that they can more effectively participate in their own defense.” Blythe continued. “If doing that means that residents are less stressed on the pod, that means it’s a better day for them, and it’s a better day for our deputies. A lot of people forget that 60 to 70 percent of the people in jail are pre-trial; they haven’t yet been found guilty of anything. The system is designed to give people the benefit of the doubt, and I think the public needs to remember that.”

“She is one of the most detail orientated people I have had the pleasure to work with, which leads to her diligence and proficiency in running the law and leisure library. Each month, she manages hundreds of requests for books, law library visits and notary stamps to ensure we meet guidelines for each service set forth by the law.”