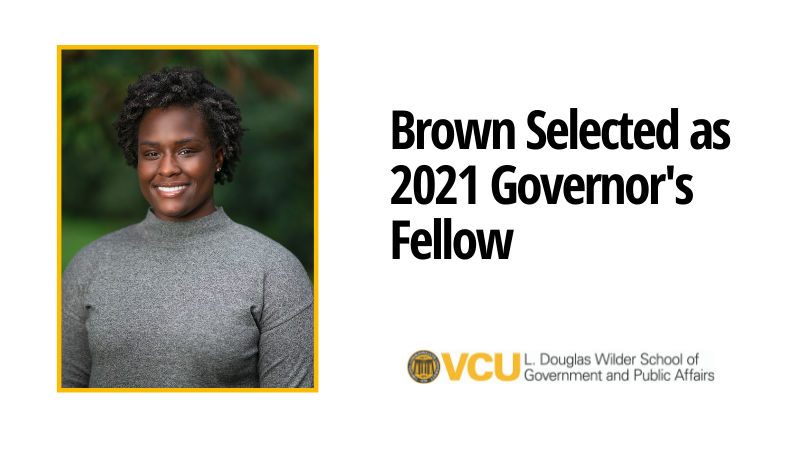 Whitney Brown, a second-year graduate student in public administration at the VCU Wilder School, has been tapped to participate in the Virginia Governor’s Fellows Program. Established in 1982, the program is an intense eight-week internship within the state’s executive branch for rising college seniors, recent graduates or enrolled degree candidates in a graduate or professional school. Fellows are selected through a highly competitive process and assigned to one of Virginia’s 15 cabinet-level departments, where they attend events with senior ranking public and private sector leaders and assume responsibility on important statewide and departmental initiatives. All of this year's Fellows will receive a stipend of $3,600—a first in the program’s history.

Brown is among 25 students slated to participate in the program this summer, which runs from June 1-July 31. She has been paired with the administration secretariat. She spoke with the Wilder School recently to share what she hopes to gain as a Fellow, how the Wilder School has impacted her and her plans for the future. Her responses have been edited and condensed for clarity.

What do you hope to gain from this experience?

I was fortunate to be placed under Secretary of Administration (SOA), Grindly Johnson, where I hope to gain some of the operational skills and knowledge needed to support the five agencies that the SOA manages. I am honored to share a space with some of the Commonwealth's brightest leaders and hope to learn more about both the visible and "behind the scenes" work that goes into executing state-level government responsibilities.

Tell us about your experience at the VCU Wilder School.

I was hesitant about pursuing graduate school full-time. I had entered the workforce immediately after receiving my undergraduate degree from Penn State and was working as a police officer for the City of Richmond. While working, I took some public administration courses at Troy University part time, but really wanted to pursue a program with more funded opportunities. The Wilder School proved to be the perfect program in the city that I grew up in, so I took advantage of the opportunity and applied!

During my time as a graduate student in the Wilder School, I’ve been fortunate to become a Wilder Fellow and was placed with the host employer HDAdvisors. I’ve also had the privilege of participating in the international 2021 NASPAA-Batten Simulation Competition, where I placed third. Some of my achievements have included being recognized as the recipient of the 2021 Edward E. Willey Graduate Award for Excellence and being inducted into Pi Alpha Alpha, the National Honor Society for Public Affairs and Administration. The Wilder School has really helped me learn to advocate for myself, push myself to do new things, and has helped me realize I have not reached my peak yet -- there's much more work I can do!