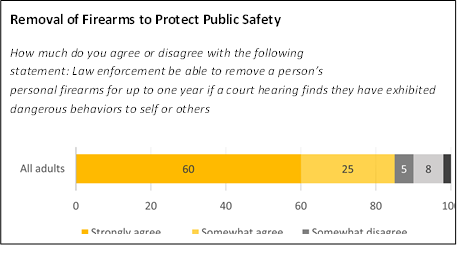 As lawmakers come together for a special session to consider issues of gun safety and possession, an opportunity presents itself to reflect on what is known about the public’s opinions and perceptions of gun policies and related issues of public safety.  Based on our past public opinion data, Virginians are supportive of restricting the access to firearms for those that are deemed a danger to public safety or have committed violent acts. Also, opinion around the best way to approach school safety also has shifted away from a security focus over the past two years.

Last summer as we approached the one year anniversary of violent demonstrations in Charlottesville, Va., our statewide poll [1] showed Virginians significantly supported giving local authorities the ability to remove a person’s personal firearms if a court finds they exhibit dangerous behavior and to restrict weapons at public assemblies. 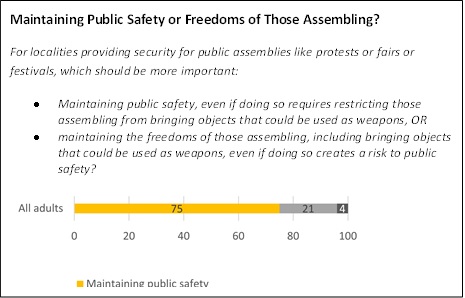 Eighty-five percent of Virginians strongly or somewhat agreed that local authorities should be able to remove a person’s personal firearms for up to one year if a court hearing finds that they have exhibited dangerous behaviors to themselves or others.  Thirteen percent of respondents either somewhat or strongly disagreed, while only two percent were undecided.

We also asked respondents to weigh the importance of two goals important to local authorities managing public assemblies - maintaining public safety by restricting those assembling from bringing weapons or maintaining the freedoms of those assembled. Three quarters (75%) said maintaining public safety was more important, with only 21% saying maintaining the freedoms of those assembled is the most important concern.It is important to note that all demographic groups had a majority strongly agreeing with the policy, with the exception of Republicans, who still had 45 percent agreeing strongly. This compared to 61 percent of Independents and 69 percent of Democrats who strongly agreed. Large majorities of both parties and Independents agreed strongly or somewhat with removing firearms from those deemed dangerous: Democrats with 91%, Independents with 85% and Republicans with 76%. 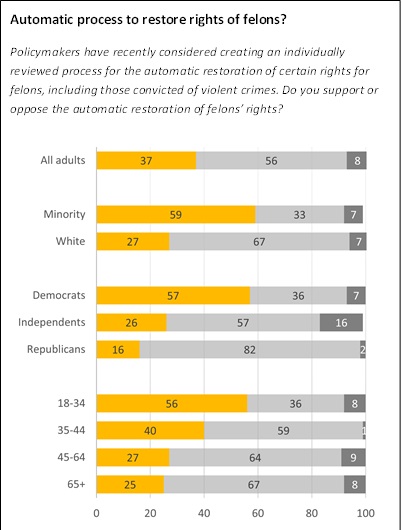 In our Winter 2018 poll 56 percent of Virginians opposed an automatic rights restoration process that would include violent felons while 37 percent said they would support it.  Certain demographic categories were more likely to support such a process. Former Virginia governor Terry McAuliffe has cited his proudest moment in office as the creation of a program for the restoration of rights to convicted felons who have served all assigned punishments.  Policymakers have considered creating an individually reviewed process for the automatic restoration of certain rights for felons, including those convicted of violent crimes.  Respondents were asked whether they supported such an automatic restoration process, as well as several follow up questions depending on their starting stance.

Minority respondents (59 percent) were more likely to support such a restoration process when compared to white respondents (27 percent).  Likewise, there was a difference based on party identification.  Democrats (57 percent) more often supported such a process compared to their Independent (26 percent) or Republican (16 percent) counterparts.

In addition to being asked about their starting position, the 37 percent who said they would support an automatic rights restoration process were asked if that would remain the case if certain specific rights were restored.  Of the 37 percent who originally were supportive, close to three-quarters shifted to opposition if the process would restore the right of felons, including violent felons, to possess a firearm. 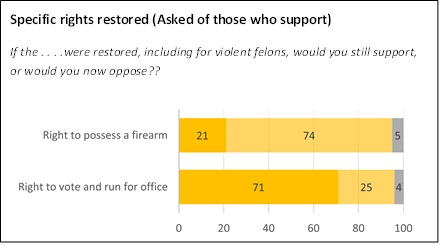 These data indicate that the public cares about whether individuals who are deemed violent have access to firearms and are very supportive of limits to that access.Those who originally opposed a general rights restoration process were asked whether their position might change if the right to possess a firearm was restored only to non-violent felons. Excluding violent felons from those who would regain the right to possess a firearm changed the position of only 26 percent of the original 57 percent who opposed such a process, while 70 percent of those originally opposed remained opposed.

As school shootings have continued to occur, we have had a recurring policy conversation around how to keep our public schools safe. Much policy conversation has circled around whether or not to arm teachers or other school personnel but has also included the role that mental health plays in the prevention of these atrocities.

In our Summer 2018 poll respondents were closely split with a plurality of 41 percent saying that additional security measures was the right approach to address school safety and 36 percent thought that safety issues should be addressed through the mental health system.  Importantly, 20 percent volunteered that both approaches should be used.

These findings mark a significant change from two prior surveys conducted in late 2013 and again in late 2015.  Those saying additional security measures were the right option dropped by 15 points compared to late 2015 while the portion selecting the mental health system increased by 9 points from 27 percent to 36 percent. The number saying both should be used also increased by 9 points from 11 percent to 20 percent.  Looking at the change in more detail, in late 2015 every demographic group analyzed preferred additional security to working through the mental health system.  In summer 2018, a plurality of respondents preferred a mental health approach in the Northern Virginia and South Central regions, among those with incomes below $100,000, those with some college or a college degree, Democrats and minority respondents.  A more detailed examination of the significant differences within demographic groups is available in the full report.

[1] Wilder School Public Policy Poll Summer 2018, random sample of 802 adults in Virginia conducted by landline and cell telephone from July 10-30, has a margin of error of +/- 3.49 percentage points.