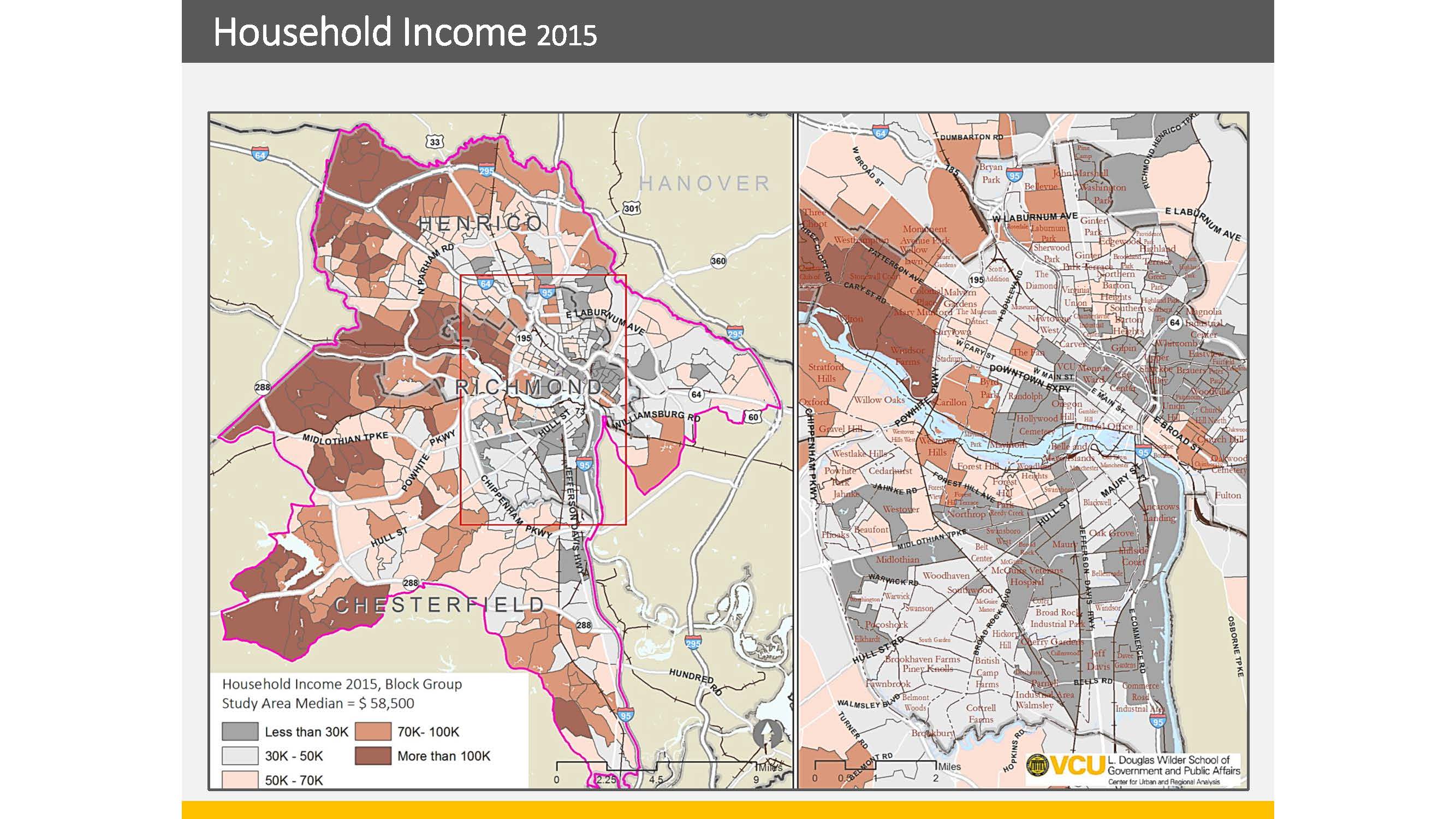 A map of the Richmond metropolitan region shows household income in 2015.

The Center for Urban and Regional Analysis at Virginia Commonwealth University’s L. Douglas Wilder School of Government and Public Affairs and Richmond Memorial Health Foundation today released a series of maps examining the relationship between socioeconomic indicators and the Richmond region’s housing market.

The analysis was conducted in coordination with a Market Value Analysis of residential real estate in the city of Richmond and the counties of Chesterfield and Henrico. The MVA was completed this fall by Philadelphia-based Reinvestment Fund, one of the nation’s largest community development financial institutions.

Some of the key findings from CURA’s analysis included:

CURA’s analysis identified four neighborhoods for closer study: Glen Tara and Meadowbrook in Chesterfield, Greater Brookland Park in Richmond, and Lakeside in Henrico. All four represent moderate markets with a diverse population and a potential for growth, with a close proximity to job centers and access to transportation.

The MVA and CURA analysis are initiatives of Invest Health RVA, funded by the Robert Wood Johnson Foundation in partnership with Reinvestment Fund. Invest Health RVA is part of a network of 50 cities aimed at supporting community leaders as they work together across the health and development sectors on strategies for leveraging private and public investments that accelerate improvements in neighborhoods facing the greatest barriers to health.

“It is crucial that we understand the changing needs in our region related to health, housing and job opportunities,” said Sheryl Garland, vice president for health policy and community relations at VCU. “The Invest Health RVA team wants to build on the creativity and energy of young men and women moving into our community while ensuring that the families who have lived here for generations are part of a future built on strong, diverse neighborhoods and opportunities for everyone to enjoy good health and economic success.”

“CURA’s analysis—performed through our own data system, MetroView—confirmed how stronger markets correlate with a good performance of traditional socio-economic indicators, but showed also how some middle-class, mixed-race areas, identified as middle-markets by the MVA, experience higher-than-average income growth as well as better economic and health characteristics. These are the areas that are primed for further development” he said.

“There is a lot to do to reduce disparities and provide opportunities for everyone in the region,” Fasulo said. “The Wilder School and CURA want to be part of this change, and we look forward to providing all involved stakeholders with the needed data and information to make decisions that can move the region forward.”

The MVA by Reinvestment Fund demonstrated that housing choice vouchers and other subsidized rentals are concentrated in the eastern side of the region. The analysis found that the percentage of households spending 30 percent or more of total income for housing is high compared to other metropolitan areas. Finally, the study highlighted concerns that households with annual incomes as high as $72,000 are limited by the lack of affordable housing in most of the region.

“Too many families are locked out of neighborhoods with recreational amenities, quality schools, healthy environments and transportation access to stable jobs,” said Danny Avula, the City of Richmond’s public health director. “These two analyses give us the tools to identify policies and investments that can unlock new housing markets. Moving forward, we can create racially and socioeconomically integrated communities that can serve as a national model for resilience, reconciliation and healing.”