‘Fulfilling the Promise, Virginia Commonwealth University and the City of Richmond, 1968–2009’ 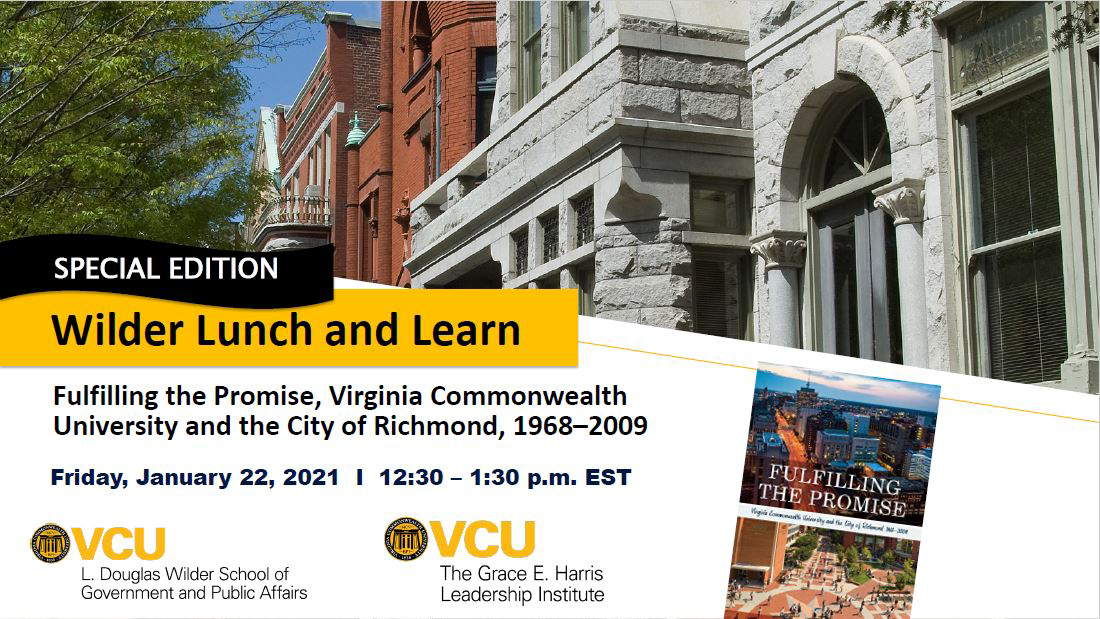 In “Fulfilling the Promise,” the authors tell the intriguing story of VCU and the context in which the university was forged and eventually thrived. Founded in Richmond in 1968, VCU began with a mission to build a university to serve a city emerging from an era of urban crisis — desegregation, white flight, political conflict and economic decline. With the merger of the Medical College of Virginia and the Richmond Professional Institute into the single state-mandated institution of VCU, the two entities could embrace their mission and work together productively.

Although VCU’s history is necessarily unique, Trani and Kneebone show how the issues shaping it are common to many urban institutions, from engaging with two-party politics in Virginia and Black political leadership in Richmond to fraught neighborhood relations, the complexities of providing public health care at an academic health center and an increasingly diverse student body.

Eugene P. Trani, Ph.D., is president emeritus and University Distinguished Professor at Virginia Commonwealth University. After becoming VCU's fourth president in 1990, Trani greatly expanded the presence of the university, which became the largest university in the commonwealth in 2007. VCU assumed a key role in metropolitan and statewide development during his presidency. After nearly two decades, Trani retired in 2009. While president, he continued to research and write scholarly books; since then, he has continued to publish books, including “The Reporter Who Knew Too Much: Harrison Salisbury and the New York Times,” before co-authoring “Fulfilling the Promise, Virginia Commonwealth University and the City of Richmond, 1968–2009.”

John T. Kneebone, Ph.D., is an associate professor emeritus of history at Virginia Commonwealth University, retiring in 2019. He is the author of “Southern Liberal Journalists and the Issue of Race, 1920-1944,” a co-editor of the “Dictionary of Virginia Biography” project and a part of the team behind VCU Libraries’ digital history project, “Mapping the Second Ku Klux Klan, 1915-1940.” At VCU, he coordinated the public history component of the history graduate program, served two terms as chair of the department and, in 2019, received the Distinguished Faculty University Award of Excellence.