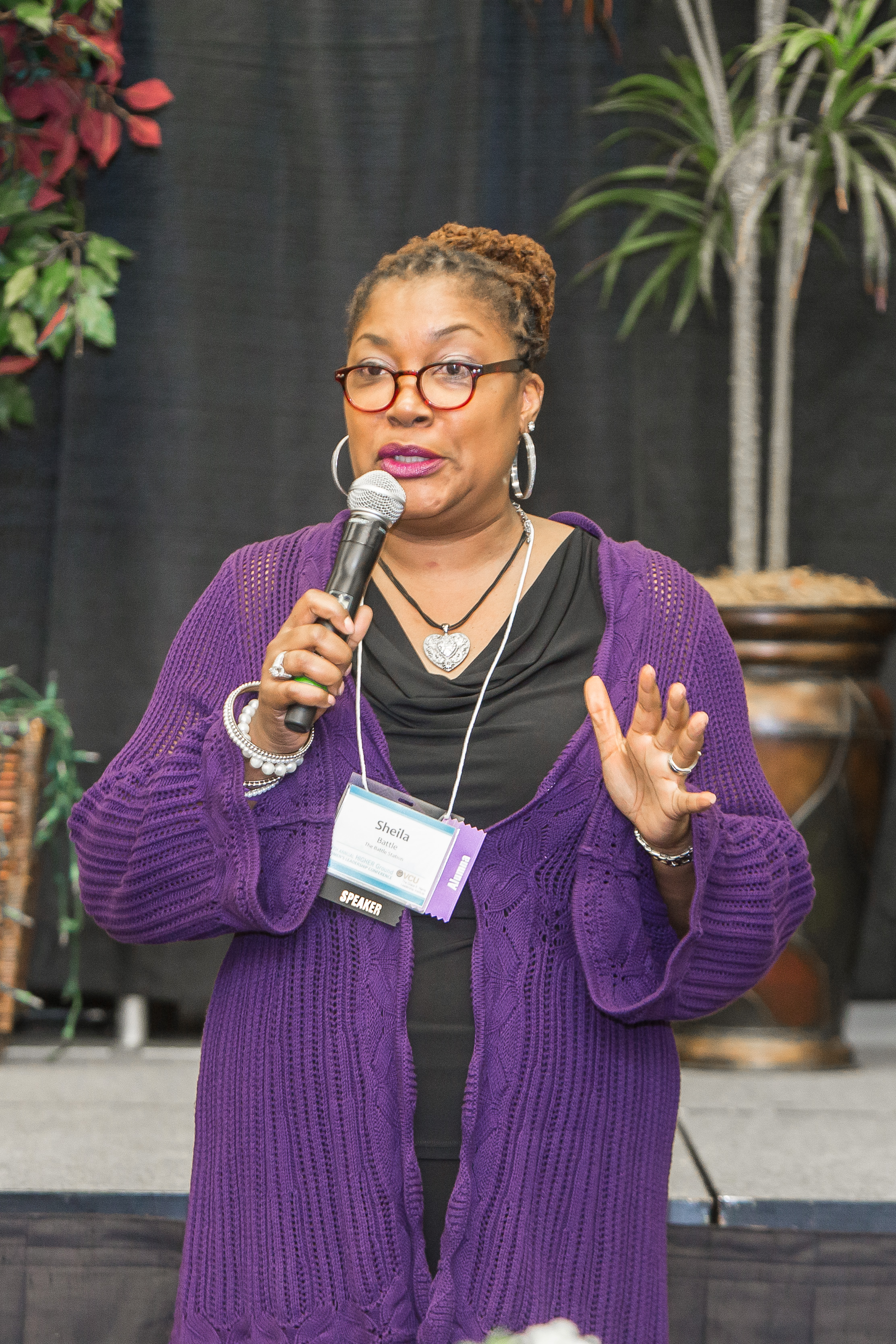 When Sheila E. Battle talks about Grace E. Harris, Ph.D., and the role she played in her life, her eyes start to water.

GEHLI, which is part of the Wilder School, offers programs that promote personal and professional leadership growth. The institute honors Dr. Harris, whose remarkable 48-year tenure at VCU included serving as provost, interim president twice, and dean of the School of Social Work and who stepped down as a distinguished professor at the Wilder School in 2015.

“These programs and Dr. Harris taught me how to be confident,” Battle said. “That’s why I get emotional when I talk about her. There is nothing like the network you develop in these programs to give you strength and help you find success.”

Battle was among the 300 people who attended the 11th Annual HIGHER Ground Women’s Leadership Conference, held Nov. 3 at the Greater Richmond Conference Center. She opened the event delivering the charge for the day, reflecting on her life-changing experiences with GEHLI’s programs.

Battle encouraged the participants to use the day to pause, plan and pivot. Her three-step blueprint instructed participants to shut out the noise of their everyday demands, clear the pathway for the future, and be ready to turn in the direction of change. For Battle, following the blueprint helped her make meaningful changes in her own life, leading to a feature spot in TEDxRVA, the launching of The Battle Station, a Soulcare company, and a forthcoming book.

This year’s theme—“Challenging the Narrative: Creating Change For Ourselves And For Our World”—spoke to the power of shaping perceptions and decisions about ourselves, our workplaces, and our communities.

“To be transformational leaders, we must stay grounded in who we are as individuals while working to weave a collective narrative that honors the experiences of everyone,” said Nakeina Douglas-Glenn, Ph.D., director of GEHLI and assistant professor of public administration at the Wilder School.

“Dr. Harris influenced the lives of so many people, and she remains an inspiration to us all. She exemplifies the values of VCU and its commitment to public service, nurturing the next generation of leaders in our community, and sharing knowledge with others.”

The gathering of mostly women shared their stories of strength and struggle during workshops. They heard powerful messages of minimizing self-limiting narratives, of negotiation and change, of building and sustaining successful collaborations, getting board ready, and how to create a successful grant writing strategy.

You need to understand your own voice and realize that you write your own story, she said.

“You can write about me, but you can’t write me. I own my own story,” she said. “If you don’t like something, change it. Change the sentence. You are in charge of that next sentence. Own your own story.”

It’s your narrative, no one else’s. Narratives are formed as character driven, a series of experiences happening to you or plot-driven, a story you create, revise, edit, she said. It’s ever-evolving. One story from an observer (a narrative) is never greater than the one you are in charge of.

Our narratives are separate stories. Each narrative is important. Each narrative has an impact. Each story deserves to be told. We must recognize the bigger impact of our collective of stories, Williams said.

Our narratives comprise our anthologies and are a part of a larger anthology in which we exist. The interwoven plots tell the world’s story. If we only subscribe to a narrative, we can’t have control over the anthology. Instead we must strive to be part of an anthology, she told the audience.

The day was bought to a close with an experiential workshop led by David Leong and Aaron Anderson professors in the VCU Department of Theatre. Leong and Anderson brought their theater expertise to the front lines of leadership, placing emphasis on presence and engagement:

“There are two types of leaders: one, ‘look at me’ leaders and two, ‘I see you’ leaders —which are you?"

Leong and Anderson helped participants understand how to read a room and how to strategically use actions and behavior to their leadership advantage. Their work afforded the guests an experiential opportunity to operationalize leadership practice and presence.