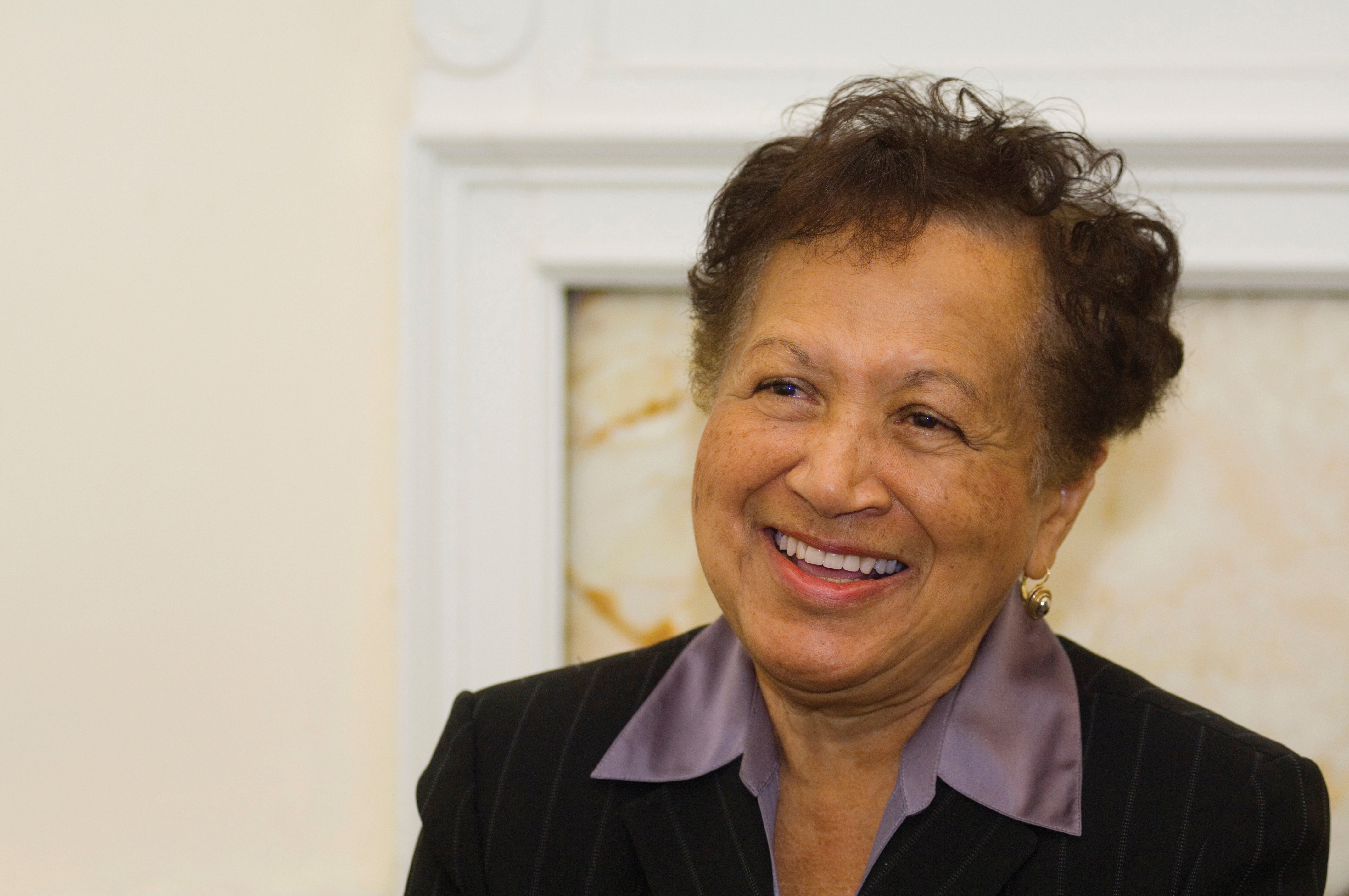 Dr. Grace Harris, who retired as a distinguished professor at the Wilder School’s Center for Public Policy and was the first African-American woman to serve as the chief academic officer of a four-year public university in Virginia, died on Monday, February 12.

Dr. Grace E. Harris, who oversaw the transformation of Virginia Commonwealth University from a commuter school to a nationally recognized urban research institution when she became the first African-American woman to serve as chief academic officer of a four-year public university in Virginia, died on Monday, February 12.

Her legacy at VCU included 48 years of extraordinary service, most recently as a distinguished professor at the Wilder School’s Center for Public Policy and as a visionary of the leadership institute that bears her name.

Considered one of the highest profile women in higher education, Harris ascended the ranks to become dean of the VCU School of Social Work, provost and acting president at a time when less than one percent of full professors in the nation were black women. That she served at the vanguard of VCU (then Richmond Professional Institute)—the very institution that denied her admission on the basis of her race in 1954—is the great irony of her remarkable career.

“[Dr. Harris] was an iconic leader whose extreme competence, racial identity and connection to the needs of the community and its citizens had a dramatic impact on the identity of VCU and the way it engaged people.” -L. Douglas Wilder

Dr. Harris served as provost and vice president of academic affairs of the university from 1993-1999, during a formative period in the institution’s history. She was the first hire and chief lieutenant to president emeritus Eugene Trani, Ph.D., a visionary academician who radically expanded VCU's physical presence and redefined its role as an anchor of regional economic and community development.

Among her most prominent achievements: the establishment of the VCU School of Engineering, restructuring of two colleges, and stewardship of the university’s first strategic plan and payroll system. As the blueprint for the university’s rise to prominence, the 1999 strategic plan was instrumental in setting the tone for a contemporary VCU and forging the union between the MCV and Monroe Park campuses, once starkly disconnected.

L. Douglas Wilder, Virginia’s 66th governor, colleague and longtime friend to Dr. Harris, described her as an “iconic leader whose extreme competence, racial identity and connection to the needs of the community and its citizens had a dramatic impact on the identity of VCU and the way it engaged people.”

Susan Gooden, Ph.D., a professor of public administration who served as the executive director of GEHLI from 2004 to 2015, said “It is the rarest of individuals who shapes an institution like Dr. Harris shaped VCU.”

“She guided the university to fulfill its mission. All of us at VCU—administrators, faculty, staff, and students alike—owe a debt to Dr. Harris.”

Harris joined the teaching faculty of the RPI School of Social Work in 1967. Propelled by a strong work ethic, exceptional interpersonal and leadership skills, she was appointed dean in 1982 and served for eight years.

Her tenure as dean of the School of Social Work was enormously successful. Dr. Harris led the school to national prominence, expanded the growth of satellite programs in Northern and Southwest Virginia, and doubled enrollment and grant-funded research. In 1990, she was promoted to vice provost for continuing studies and public service. As vice provost, Dr. Harris oversaw the administration of the Community Services Associates Program, which provided leave to faculty who wished to work on a community or agency project.

In 1999, the Board of Visitors established GEHLI on the occasion of her departure as provost. One of less than 20 organizations in the nation of its kind, the institute provides capacity training and development for emerging leaders as well as VCU faculty, staff and administrators.

"Dr. Harris is a towering figure who serves as a role model to all of us,” said Wilder School Dean John Accordino, Ph.D., FAICP.

“She treated each new milestone in her career as a new opportunity to serve others and to advance the cause of social equity. In the Wilder School, we strive to follow the example she set and we are proud to carry her legacy forward through the work of Grace E. Harris Leadership Institute."

Over the years, GEHLI has made an inestimable impact on VCU and its surrounding communities, serving more than 935 alumni through its flagship programs and an estimated 375 individuals annually at its professional development events and workshops. Notable institute alumni include Beverly Warren, Ed.D., Ph.D., president, Kent State University, and former provost at VCU; Richmond Mayor Levar Stoney; and Del. Delores L. McQuinn, D-Richmond.

“Dr. Harris meant so much to those who knew her,” said GEHLI director Nakeina Douglas-Glenn, Ph.D.

“We are proud to have worked alongside her and honored to continue her legacy through the work of the institute. Her commitment to recognizing the intrinsic dignity and worth of every person with whom she came into contact makes her leadership an aspirational goal for us all in our daily practices.”

Dr. Harris stepped down from her post as a distinguished professor at GEHLI in December 2015. She is survived by her husband, James W. ‘Dick’ Harris; children Gayle E. Harris and James ‘Jay’ Harris and his wife, Noelle; and grandson Jullian Harrison (M.S.,’16).

Remains rest at Scott's Funeral Home, 115 E. Brookland Park Blvd., where viewing will be held on Friday, February 23, from 9 a.m. to 8 p.m.  Funeral services will be held at the Richmond Convention Center, 403 N. Third St., on Saturday, February 24, where Dr. Harris will lie in state beginning at 9 a.m.  A Delta Sigma Theta Omega Omega Service will be held at 10:30 a.m., followed by a Service of Celebration at 11 a.m. Interment at Mount Calvary Cemetery in Richmond.

In lieu of flowers, memorial donations may be made to the Dr. Grace E. Harris Scholarship by entering the search term “Harris” at https://www.support.vcu.edu/give.

Established in 2000, the Dr. Grace E. Harris Scholarship is a renewable grant awarded to exceptional, incoming, full-time freshmen in the School of Social Work. For more information about the scholarship, contact Ms. Mary Riddick, director of development of development, at (804) 828-0410 or at give2ssw@vcu.edu.

Grace Harris, a transformative figure in VCU’s history, dies at 84

Rejected by RPI in 1954, Harris would rise to VCU provost