Alum Sesha Joi Moon ‘working with purpose and on purpose’ as leader of diversity, equity and inclusion at U.S. Capitol 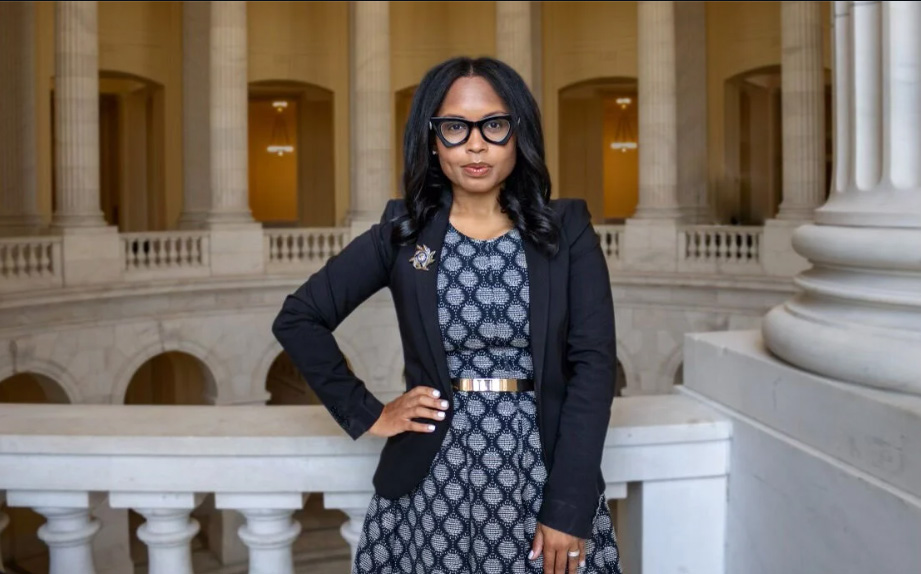 Moon earned a bachelor’s degree in African American Studies from Virginia Commonwealth University, a master’s from the L. Douglas Wilder School of Government and Public Affairs at VCU.

Before she became a leader of diversity, equity and inclusion efforts on Capitol Hill, Sesha Joi Moon, Ph.D., served as a student leader at Virginia Commonwealth University and became one of the first students to earn a degree from the Department of African American Studies at VCU’s College of Humanities and Sciences. It was one of many moves she’s made that she says “allowed me the opportunity to hold space for underserved communities” — work Moon has been doing ever since.

This summer, Moon became the director of the U.S. House of Representatives’ Office of Diversity and Inclusion. The Richmond native’s newest role comes after a career leading human resources and diversity, equity and inclusion efforts in several branches of government. Since graduating with a B.A. in African American studies in 2005 and an M.S. in criminal justice with a concentration in human resources management from the L. Douglas Wilder School of Government and Public Affairs in 2008, Moon has served as the director of diversity, equity and inclusivity at the National Institute of Standards and Technology, a senior talent management strategist at the U.S. Patent and Trademark Office and a human capital officer and senior policy specialist at the D.C. Department of Human Resources, among other roles. She earned her Ph.D. from Old Dominion University in 2013.

The experience that led Moon to this point extends well outside the 9-to-5 workplace as well. In 2021, Moon co-founded The JXN Project with her sister Enjoli Moon, an assistant curator of film at the Institute of Contemporary Art at VCU — an award-winning project the two created to educate others on the history of Richmond’s Jackson Ward, the first Black urban neighborhood registered in the National Register of Historic Places, and its significance in American history.

After joining the U.S. House of Representatives’ Office of Diversity and Inclusion in July, Moon spoke with VCU News about what she envisions for her new role, what she carries with her from her time in Richmond and what advice she’d give to those looking to follow in her footsteps.

Tell me about your career path to this point. Did your VCU degrees help prepare you for this type of work, and if so, how?

My academic pursuits, as well as my extracurricular activities during my time at VCU, absolutely prepared me for this type of work. As one of the first graduates of VCU’s Department of African American Studies, as well as president of the Black Caucus and vice president of the Eta Tau Chapter of Delta Sigma Theta Sorority Inc., the university allowed me the opportunity to hold space for underserved communities, both academically and socially — which is why it’s no surprise that VCU is now an officially designated minority-serving institution. I felt safe and seen while at VCU, as the campus was a reflection of who I was when looking at not only the student body, but also key senior leaders of color like Dr. Henry Rhone, Dr. Napoleon Peoples, Dr. Reuban Rodriguez, Dr. Njeri Jackson, Sister Faye Walker, Kelli Lemon, and the list goes on — and in those moments that fell short, I also felt empowered to stand up and speak out.

Also, as a Richmond native, many of my high school classmates went away for college, whereas I stayed home — and having these immersive experiences in a historically complicated space like Richmond only helped to further influence my career journey as a leader in diversity, equity, inclusion and accessibility.

Tell me about your new role with the U.S. House of Representatives’ Office of Diversity and Inclusion and your vision for it. What would you like to see accomplished, and what do you hope your office’s impact may be beyond Congress — and across the country?

As director, I am tasked with helping to drive the office’s mission, which is to create and cultivate a diverse and inclusive workforce in the U.S. House of Representatives. In this new role, I envision the office emerging as an essential resource in the advancement of diversity, equity, inclusion and accessibility within the U.S. House of Representatives by delivering optimal services designed to ensure that its congressional workforce is a representative reflection of the American people.

What advice would you give to students or alums who are interested in following a similar career path and working in spaces that focus on diversity, equity and inclusion?

If I could give one word of advice to anyone in the Ramily, across any and all career paths, it would be to have equal parts of patience and perseverance. Even with a Ph.D., I began my federal career as an intern with the U.S. Department of Commerce and now, nearly 15 years later, I’ve landed with Congress. It most definitely didn’t happen overnight, but I followed my passions and I now have the sheer good fortune of being able to say that it led to a career path where I’m working both with purpose and on purpose. Also, what they say is absolutely true — relationships matter.

Is there anything else you’d like to share about yourself, your career and your goals for the future?

There’s a well-known saying — “I am for Richmond, first and last” — and that’s a core value that I hold near and dear, both as a person and as a professional. So, if anything, I’d just like to say thank you to my hometown because, without it, there would be no me — and therefore I try my very best to take Richmond into every room with me.

At this point in my life, I’ve learned to submit to ancestral assignments. It’s not lost on me that Abraham Peyton Skipwith, who The JXN Project regards as the “Founding Father of Jackson Ward” as its first known Black homeowner, secured his freedom in 1789, which is the same year that the U.S. House of Representatives was established — followed by 1793, the year the cornerstone for the U.S. Capitol was built, which coincides with the year in which Skipwith built his cottage in the city’s sixth ward. I don’t view these as coincidences, but more so ancestral alignments, which only help to further drive my commitment to create and cultivate a diverse and inclusive workforce in “The People’s House.”