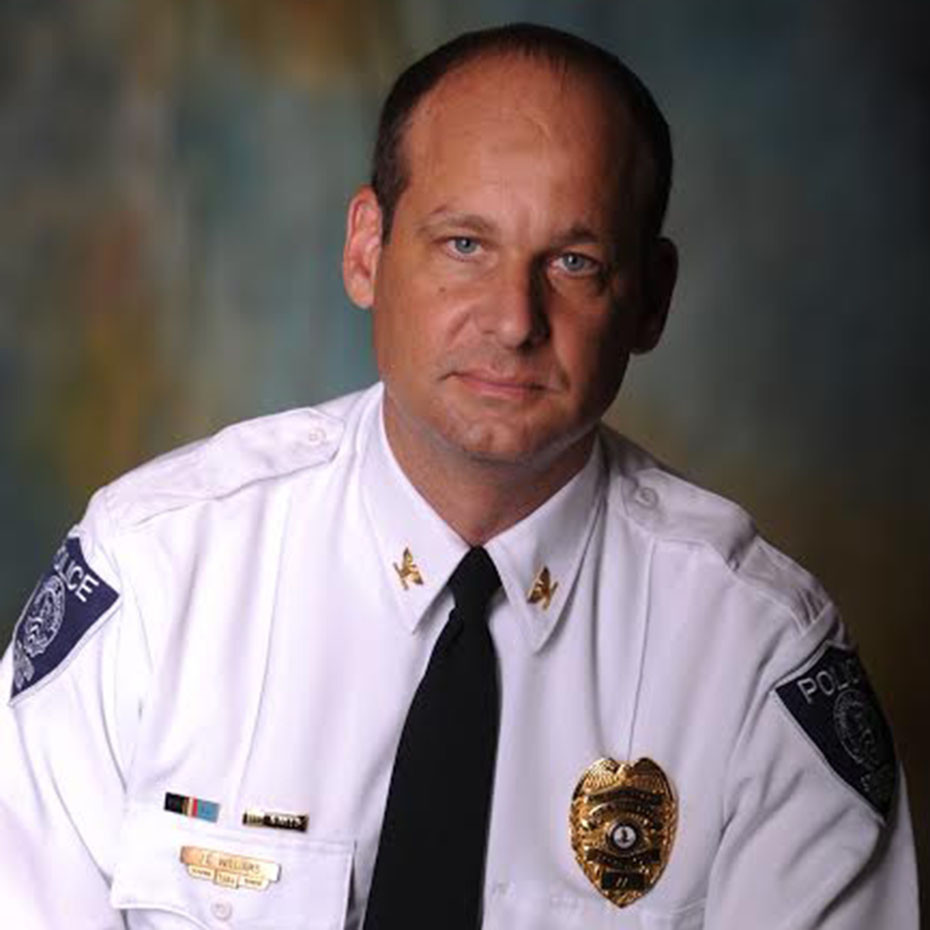 When Jim Williams was growing up, there was no question what he wanted to be.

“My dad was career Army, and then he was a police officer in Cape Giradeau, Mo., and a sheriff’s deputy in Highland County, Va.,” Williams recalled. “I thought that was the coolest thing ever. He’d come home and tell stories about his day and I knew that’s what I wanted to do.”

Williams, chief of the Staunton Police Department, is entering his 31st year in law enforcement. The president of VCU Alumni, he earned his bachelor’s in what was then called administration of justice in the School of Community and Public Affairs and later his master’s degree in criminal justice. He’s also worked as an adjunct professor at the Wilder School, teaching introductory policing and violent crime scene investigation.

“The Wilder School plays an important role in preparing students for the challenges of today’s world and educating tomorrow’s leaders in government,” he said.

“Not a lot of folks were getting their criminal justice degrees back then,” he said. “Only a couple of places offered the degree.”

For Williams, the choice was easy – VCU’s program had a good reputation and in 1982 he transferred. His 3.9 GPA at the community college helped land a Presidential Scholarship, and he was one of the first 10 students to earn the honor. “And two of us were criminal justice majors.”

He entered VCU in the fall of 1982 and graduated two years later at age 20. He began training at the Central Shenandoah Criminal Justice Academy and joined the police department in Staunton, a city just over 100 miles west of Richmond.

“When I joined the police department, I was one of four police officers out of 50 who had a four-year degree,” he said. “Now, as I’m hiring, I would say about 50 percent have degrees.”

Williams steadily rose through the ranks, starting as a police officer and promoted to corporal, sergeant and captain and also serving as shift commander, investigations unit commander, team leader of the Critical Incident Response Team and division commander of the Community Involvement/Support Operations division. He is also a graduate of the FBI National Academy. Additionally, he has served as an adjunct instruct of police science courses at Blue Ridge Community College.

Law enforcement is becoming increasingly more technical and complex. The Wilder School’s criminal justice program — the fourth largest major at VCU — does an excellent job of educating students for careers in law enforcement, corrections and other aspects of public safety, he said.

As president of VCU Alumni, Williams is one of the university’s biggest boosters. VCU is becoming a family tradition–both his sons are graduates. He and his wife, Becky, also have a daughter, who’s still several years away from deciding where to attend college.

Williams became involved in the alumni association when he returned to campus for his 25th reunion. Before becoming president, he served as president-elect.

“You always want to give back,” he said. “When I reflect back on what the campus was like when I was here in the early ‘80s, it’s amazing the progress we’ve made. The bar has consistently risen over time.

“I don’t know why you would go anywhere else. You receive a first-class education and you’re in downtown Richmond — the state’s capital. There are so many opportunities here. If you’re studying criminal justice, the Wilder School has an excellent program and there are so many law enforcement, correctional and state government opportunities.“

Besides his involvement in the Wilder School and VCU, Williams is also a marathon runner. He’s run in 14 marathons across the United States and Europe, including Boston, Berlin and London.

What advice would he give to prospective students and parents about looking at colleges?

“If you haven’t looked at VCU, you should. If you think it was the same as it was 5, 10 or 20 years ago, you’re sadly mistaken. You need to give VCU another look, and you’ll be glad you did.”