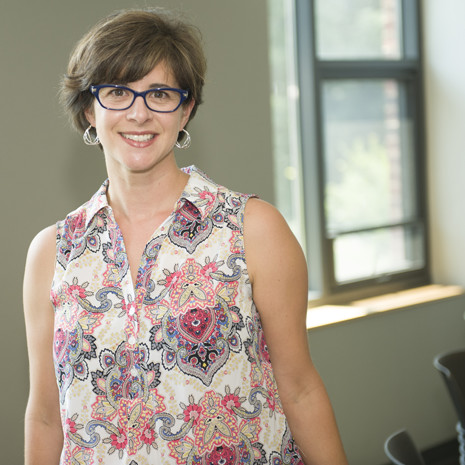 Not sure you want to be a planner? Meghan Gough, Ph.D., an associate professor and chair of the urban and regional planning program at the VCU Wilder School, wasn’t either. But after years of working to protect people and the environment from hazardous waste sites, Gough was ready for change.

Gough, who holds a bachelor’s degree in biology and environmental science from James Madison University, landed a job as an environmental scientist contracting with the Environmental Protection Agency (EPA) after college. It was 1997 and Gough was quickly involved in assisting the Superfund clean up process, a federal program that allows the EPA to clean up abandoned hazardous waste sites or to compel responsible parties to do so. While she excelled in the role and was even promoted during her three-year tenure, she described the work as limiting.

“I am incredibly proud of the deliberate efforts made by VCU to translate our research to assist community needs. This is one of the things that VCU does exceptionally well. We establish community partners early and work with them often as a process to identify the research needs that will help to make a healthier Richmond.”

“As a scientist, I really felt that I was working in the shadows of what mattered to me. I missed the human perspective. I wasn’t permitted to get into the questions of why environmental degradation had occurred, to entertain the policy questions of what conditions had enabled the damage, or to be a part of informing the policymakers who could prevent it from happening again. It simply wasn’t part of my job to ask those questions,” said Gough.

“My role was simply to manage the damage, to teach software techniques to the people on the sites who were collecting water or soil samples, and to ensure those samples were properly analyzed. I knew then that I had to get the credentials that would allow me to ask bigger questions and to be part of the solutions.”

It was while researching her next step that Gough discovered the subset of planning that would become her passion, land use and community development This is a branch of planning that employs the systematic assessment of physical, social and economic factors in an effort to encourage and assist land users in selecting options that increase productivity, are sustainable and meet the needs of the community.

Gough resumed her studies in 2000, earning a master’s in urban and regional planning from Virginia Tech in 2003, before earning a doctorate in city and regional planning from Ohio State University in 2008. She joined the faculty of the VCU Wilder School later that year. In the seven years that have followed, Gough, whose research focuses on inclusive processes for engaging non-traditional stakeholders in community development, has made an immeasurable impact on the University.

Gough’s contributions include the development of courses designed to integrate applied and community-engaged projects within the Wilder School as well as service on VCU’s Federation of Community-Engaged Research (CEnR), where she works with researchers across both the medical and academic campus to promote institutional alignment of CEnR activities that address the needs of VCU’s constituent partners

When she’s not lecturing, urging students to get out of the classroom to “wrestle with the unexpected events and ethical questions that arise in the field,” or serving as chair, Gough is hard at work on her forthcoming publication, “Public Gardens and Community Revitalization.” The book examines how public gardens, once the province of the wealthy, have emerged as key partners in meeting the needs of underserved populations within urban communities. She hopes the work, which is slated for release in December 2016, will provide replicable models for ways that different groups can come together to implement sustainability.

Gough’s present research was inspired in part by the collaborations formed through her work with CEnR which has led to the development of several meaningful university-community partnerships, including Lewis Ginter Botanical Gardens. Those relationships, said Gough, are among the many reasons she has found fulfillment at VCU.

“I am thrilled to be part of an institution that values the integration of applied work, supports faculty in conducting applied scholarship and supports experiential learning opportunities for students. I’m also incredibly proud of the deliberate efforts made by VCU to translate our research to assist community needs. This is one of the things that VCU does exceptionally well. We establish community partners early and work with them often as a process to identify the research needs that will help to make a healthier Richmond.”