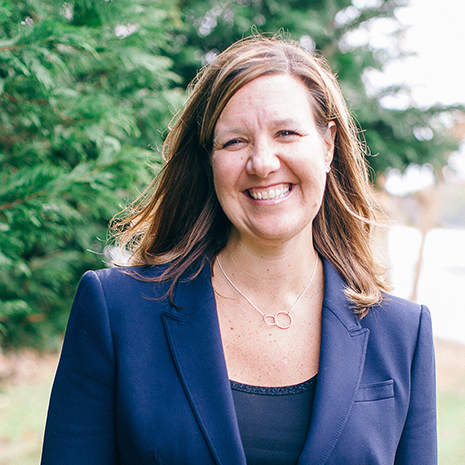 Robyn McDougle, the indefatigably affable champion of VCU’s research enterprise, has found herself in difficult circumstances before. Like navigating racial and class divides in Gilpin Court, one of Richmond’s toughest and most segregated public housing communities, or explaining the principle of validity while awaiting a search warrant at the scene of a homicide at 3 a.m.

Nonetheless, her most demanding job may be the one she recently accepted. In April, McDougle, an associate professor of criminal justice within the VCU Wilder School, became the faculty director of the university’s first Office of Public Policy Outreach. It is a job that requires her to see connections and forge partnerships where others might not and one that builds on her considerable skills and personality.

“This is the absolute perfect fit for me. VCU is a culture of excitement, acceptance and innovation. I am continually energized by the breadth and depth of our students, many of whom are just as likely to be first generation college students as they are to be top tier, early admits to our medical school. When you combine that diversity of experience with the institution’s relative youth and willingness to think differently, it’s an unusually rich community.”

“My position really serves as a hub for coalition building and for advancing the profile of public policy research at VCU among local, regional and state policy makers,” said McDougle.

It’s a big job that includes advocacy of policy relevant research across the medical and academic campus of one of the nation’s largest RU/VH universities, as well as the coordination of communications with partner organizations. RU/VH is a tier one designation used to denote the highest levels of scholarly productivity that can be achieved by the nation’s universities and colleges. The sheer size and variety of academic research occurring at VCU makes the task of developing a database of faculty scholarship, consulting, training and expertise a challenge.

Still, McDougle, who is also the wife of state Senator Ryan McDougle, R-Hanover, and the mother of 4-year-old basketball enthusiast, Reagan, is largely unfazed by the tasks ahead, adding that she has “quite possibly the best job at the best university.”

“Of course there are logistical and administrative obstacles to the development of any new office but at the end of the day my job is to tell the story of the remarkable and applicable research happening at VCU.”

Though it’s been just four months since McDougle assumed leadership, the Office of Public Policy Outreach is off to a promising start. Last spring, it hosted the first of a series of forums designed to help introduce faculty to the work and processes of the General Assembly and this fall it will present several communications workshops for researchers who wish to translate their interests into policy briefs aimed a particular public policy issue.

McDougle said the office has already begun to receive requests from the legislative community. These include recent project inquiries from the Deeds Commission on Mental Health and the Attorney General’s office, which has asked for a review of best practices in jail re-entry programs in the commonwealth.

McDougle joined VCU as an assistant professor of criminal justice in 2004. Since then, she has served as a catalyst for numerous practitioner-oriented programs and collaborations including the Public Safety Institute, which provided training and professional development to area practitioners, and the Summer Student Basic Jailor Academy, a unique community university partnership that helps students to become certified as correctional deputies while helping area jails maintain state required inmate-to-officer ratios. In addition to her work as faculty director, she teaches undergraduate courses in the Wilder School’s criminal justice program and serves as the interim director of the Commonwealth Educational Policy Institute.

Prior to joining the university, McDougle held research positions at the Virginia Department of Education, Friends Association for Children and the Richmond Police Department’s Homicide Unit. She holds a Ph.D. in developmental psychology and a master’s in criminal justice from VCU as well as a bachelor’s in psychology from Randolph-Macon College. Her doctoral research examined the impact of crime on adolescents in high-crime, low-income communities.

When asked about her 11-year tenure with the university, McDougle beamed.

“This is the absolute perfect fit for me. VCU is a culture of excitement, acceptance and innovation. I am continually energized by the breadth and depth of our students, many of whom are just as likely to be first generation college students as they are to be top tier, early admits to our medical school. When you combine that diversity of experience with the institution’s relative youth and willingness to think differently, it’s an unusually rich community.”