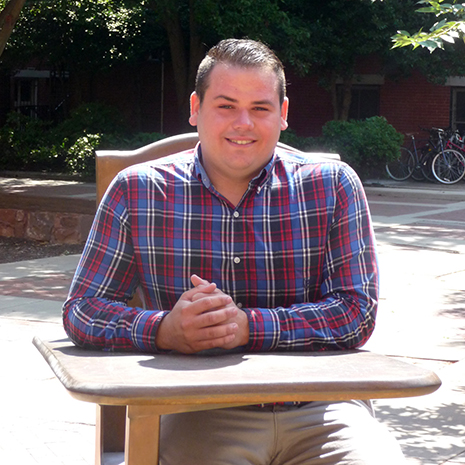 Nearly 6,000 first-year and transfer students will arrive on the campus of Virginia Commonwealth University this August. For many, Nick Garcia’s face will be among the first that they see.

Garcia is a senior academic adviser in the Undergraduate Advising Office of the VCU Wilder School. His mission: to help students think through their academic interests, comprehend requirements, explore class options and by the end of the interaction—take charge of realizing their potential.

“Our goal is not just to help students enroll in the appropriate courses and complete their degrees, but to make sure they have access to the knowledge they need to develop their own educational course. My role as an adviser is to help students balance their priorities in a reflective atmosphere that allows them to make the best decisions for them – consistent with their personal values, goals and career plans.”

Garcia knows firsthand the importance of academic advising: His own professional path was shaped by the guidance of faculty and staff mentors.

“I came to VCU expecting to be a pre-med major but ultimately realized through the support and encouragement of others that political science was a much better fit for me. It was my discussions with faculty mentors and advisers that led me to pursue the accelerated master’s program at the Wilder School. As an adviser, I think it’s important to share that personal story with others. Even the most intentional students may find that their academic journey is not linear.”

Garcia earned an undergraduate degree in political science 2011 and received a master’s degree in public administration from the VCU Wilder School in 2013.

A passion for supporting students

Garcia’s passion for helping students began right here at VCU. As a sophomore, Garcia took a job as a supplemental instructor for the University College Campus Learning Center (CLC), helping fellow students to connect with difficult chemistry concepts that he had once mastered as a pre-med student.

“There was something about taking a student from point A to point Z, watching their confidence and awareness grow that I really enjoyed,” he said.

Garcia flourished at the CLC, working in the office for two years and tutoring dozens of students before joining his alma mater as a part-time academic adviser. Last year, he was promoted to senior adviser. In his current role, Garcia serves as the second in command and lead adviser for an office that includes an assistant dean and five part-time graduate advisers. In 2014, the office had about 1,200 students in need of advising.

“Nick is an amazing adviser,” said John Mahoney, assistant dean for undergraduate academic affairs, “He has an incredibly sharp mind, scrupulous attention to detail and is able to establish a very warm and effective advising atmosphere with all of our students. He also has a very sincere interest in his students and colleagues. The Wilder School, and the VCU campus more broadly, is fortunate to call him one of our own.”

Along with his professional responsibilities, Garcia will embark on a doctoral degree in Education Leadership at the VCU School of Education where he hopes to study education policy in the fall. His primary research interest is the increased pressure faced by American colleges and universities to demonstrate returns on higher education investment.

Even when he’s not traveling, acting as a wedding officiant for friends, or visiting family back in his hometown of King George, Garcia genuinely enjoys arriving at work each day.

“At the Wilder School, I help people students who are going to change the world to help themselves. It doesn’t get more rewarding than that.”