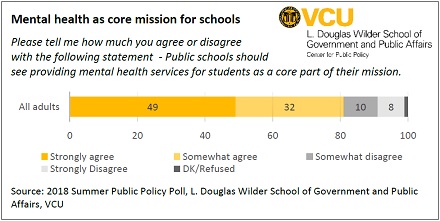 The poll found that while 76 percent of Virginians say schools in their community are safe or very safe, 81 percent believe public schools should provide mental health services to students as a core part of their mission. Also, 36 percent (up from 27 percent in 2016) consider the mental health system to be a better approach than additional security measures. By contrast, 41 percent of Virginians view additional security as the best approach (down from 56 percent in 2016) with 20 percent saying that both are needed (up from 11 percent in 2016).

“We were surprised by the shift toward a mental health approach,” said Robyn McDougle, Ph.D., director of the Center for Public Policy at the Wilder School. “We asked the same question in 2014 and 2016 and saw no major shift between those two surveys, so this shift is significant. We don’t know what is driving it, but with key efforts to improve school safety underway in Virginia, policymakers are likely to find this shift, and the view that mental health should be part of the public schools’ core mission, very interesting.”

The poll, a random sample of 802 adults conducted by landline and cell telephone from July 10-30, has a margin of error of 3.49 percent.

The poll also asked respondents a series of questions about preferred practices for school resource officers, who are fully sworn police officers working full time in schools with the authority to make arrests. School resource officers are increasingly common in school safety efforts nationally, with more than half of Virginia’s public schools using them.

“These findings show that the public sees mental health services  as a key tool in our continued efforts to improve school safety and continue Virginia’s recognized role as a leader in school safety innovation," said Brian Moran, Virginia’s secretary of public safety and homeland security.

This perception stands in contrast to data on threat assessments compiled in 2016-17 by the Virginia Department of Criminal Justice Services that shows that of 9,238 threats assessed by schools, only 1.6 percent involved someone from outside the school. Half of those involving a current student were for self-harm, while 45 percent involved a threat of harm to another student and 5 percent involved both.

The poll also measured public perception of the safety of Virginia’s college and university campuses, finding that 72 percent see them as safe (52 percent) or very safe (20 percent), while 22 percent said not too safe (16 percent) or not at all safe (6 percent.)

The findings show significant regional variation, with residents of Northern Virginia most likely (at 87 percent) to say campuses are safe or very safe. This compared to 77 percent of those from the south- central region and 73 percent from the west who said the same. The northwest and Tidewater respondents were the least likely to say safe or very safe with 59 percent and 58 percent.

For a PDF of the 29-page report, including complete question wording and detailed tables of results, go to oppo.vcu.edu.

On Thursday, Aug. 16, the Wilder School’s Center for Public Policy will release further poll results measuring Virginians’ views on the cost of higher education and the performance of high schools and colleges in preparing students for the workforce and citizenship.