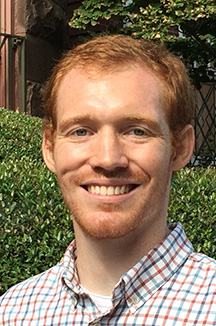 Before moving to Richmond, Myles Busching lived in Loudoun County, one of the fastest growing localities in the United States where residential homes now cover what used to be rolling farmland. When he did volunteer work in Spain, he noticed the opposite trend — people were flocking to cities and leaving rural areas.

A second-year student in the Wilder School’s Master of Urban and Regional Planning (MURP) program, Busching wants to find a solution to keeping rural areas economically vibrant and viable.

Busching, who’s concentrating in environmental planning, wants to work in a small town in a rural community. “Rural areas are often so stressed economically, and what they have to turn to is their greatest asset — their natural resources. There needs to be a balancing act between maintaining a vibrant economy and preserving an area’s unique character.”

Busching, who maintains a 4.0 grade point average, received the “Big Picture Thinker” Award this fall from MURP for his demonstrated understanding about the complexities in planning for growing regions.

“This award was established by our program to recognize a student who conceptualizes the interconnections between factors that influence urban and regional planning,” said Meghan Z. Gough, associate professor and chair of the Urban and Regional Studies and Planning Program. “This requires a student to adopt a holistic approach that places immediate actions into a broader perspective. For example, a big picture thinker considers environmental and equity implications of a proposed economic development strategy for a municipality.”

Busching received a $2,500 scholarship for this fall. Funding for the award is made possible through the Commonwealth of Virginia Graduate Tuition Assistance program, administered by the State Council of Higher Education for Virginia.

“To have my professors notice me and my work is such an honor,” he said.

Busching earned his undergraduate degree in government, with a minor in linguistics, from The College of William and Mary in 2011 and is fluent in Spanish. He learned about the Wilder School when he attended the first Morton B. Gulak Urban and Regional Planning Lecture in 2013.

“I met some of the professors and was really impressed, and I also liked how this program is hands-on,” he said.