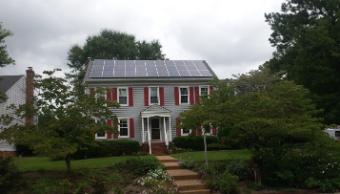 Distributed solar energy can provide at least 5 to 10 percent of the nation’s electricity demand, without causing negative impacts to the electrical grid or significant rate increases for consumers, according to new research by a Wilder School expert in alternative energy.

Researching these issues is particularly important in Virginia, Pitt said, as the state has seen rapid growth of larger, utility-scale solar farms but is falling behind in distributed PV capacity.

According to Pitt’s analysis of data from the U.S. Energy Information Administration, Virginia had zero utility-scale facilities at the beginning of 2016 but is now the 14th leading state, with almost 370 megawatts, at the end of 2017. But while Virginia’s distributed PV capacity has also been increasing—from just over 5 megawatts in 2011 to 46.5 megawatts by the end of 2017—the state still ranks only 31st in total distributed PV and 38th in distributed PV per capita. Most tellingly, only 11 percent of the state’s PV capacity is from distributed systems—compared to 39 percent nationwide—which puts Virginia 45th in the U.S.

The “Optimizing the Grid” report addressed the two primary criticisms of net-metered distributed solar: that it creates costs for electric utilities, which must be passed onto consumers, and that it creates technical problems for the electrical distribution grid.

“While these critiques have conceptual merit, it is very premature to use them as reasons to slow the growth of distributed energy today. Furthermore, with the adoption of new technologies, and appropriate policy solutions, we can achieve much higher levels of distributed PV market penetration while avoiding those potential negative outcomes,” Pitt said.

In fact, Pitt said, numerous existing studies show that distributed solar energy can provide at least 5 to 10 percent of our electrical power, without requiring significant rate increases for consumers or causing major technical problems for the grid.

For example, most recent “value of solar” studies in the U.S. have found that the benefits distributed PV provide to electric utilities – including reduced fuel demand, avoided infrastructure costs, and grid stability services – add up to a net value that is roughly equal to, if not above, the prevailing retail electricity rate. In that case, increasing distributed PV use would have little to no negative impact on customer bills.

Other studies demonstrate the vast potential to host solar PV systems on our nation’s rooftops. For example, Pitt cites a recent report by the National Renewable Energy Laboratory, which shows that Virginia could support 28,500 megawatts of rooftop solar PV. This is more than 500 times the current statewide total, and would be sufficient to provide nearly one-third of the state’s electricity.

In addition, numerous reports, including a recent study completed by Navigant Research for Dominion Energy, show that the electrical grid can handle much higher levels of distributed PV now, and even more with some technical improvements and infrastructure upgrades.

The VCU research corroborates these broader findings on the local scale. A GIS model developed by Pitt and his students shows that a single neighborhood-sized study area near Manassas, with 1900 total buildings, could easily support almost 25 megawatts of rooftop distributed PV capacity, equal to about half of the current statewide total.

The VCU engineering team working with Pitt then developed a hypothetical model of the distribution grid in the study area, and ran simulations to evaluate the grid’s ability to host increasing levels of distributed PV.

The engineers’ model sought to place PV systems at locations in the study area where they would benefit grid operations the most. They found that optimal placement of PV systems could reduce system-wide energy losses and voltage deviations, while avoiding reverse power flows, at market penetrations up to at least 20 percent. Their results also demonstrated that placing distributed PV on commercial buildings is particularly valuable to grid performance, as the peak energy demand for those buildings occurs during the mid-afternoon, when solar PV production is at its highest point.

For the second study, Pitt explored the controversies surrounding “net-metering” policies, which some utilities argue raises costs that must be passed on to retail customers. This project was funded by Dominion Energy, which under the research contract had no editorial control over the findings or recommendations. For this project, Pitt interviewed representatives of four key solar energy stakeholder groups: electric utilities, the solar energy industry, state regulators, and environmental and consumer advocacy organizations. These stakeholders all generally agreed that net-metering has some long-term limitations, including:

Pitt then studied three compromise “post-net-metering models” that had been developed by stakeholder groups in Maine, Minnesota and New York.  Each of those models would offer a new compensation rate for distributed solar customers, based on the findings of a new value-of-solar study prepared for the respective state.

An important aspect of these new models, according to Pitt, is that they would include mechanisms to account for the unique values that solar can provide at different times and places. For example, customers with combined solar PV and battery storage systems would be compensated at a higher rate for delivering their electricity to the grid during evening peak demand times.

Pitt is also a Translational Research Fellow through the Wilder School’s Office of Public Policy Outreach, which connects faculty members from across VCU with state lawmakers to explain their research and its public policy implications.

Based on these research findings, Pitt said, “Virginia should seek to increase distributed solar PV capacity in the near term, particularly in the commercial sector. At the same time, the state should begin developing a future post-net-metering strategy that would overcome the limitations of current policy, paving the way for an electricity system in which large amounts of distributed PV and other renewable resources are properly located on the grid and integrated with energy storage, demand management, and smart grid technologies.”

Steps to incentivize distributed PV in the near term could include: establishing modest tax credits or other financial incentives; allowing third-party ownership models and shared or community solar arrangements; streamlining local permitting processes; and commissioning an independent value of solar study to quantify the net benefits of distributed solar and analyze the potential electric rate impacts from solar energy growth.

Given the lack of significant negative impacts from distributed PV in the near term, Pitt argues that Virginia and other states should not rush to alter their net metering policies. However, he said, “Steps do need to be taken to prepare for the much higher levels of distributed PV that could occur in the longer term. This includes technological solutions related to energy storage and smart grid technology, as well as new policies that send appropriate price signals to properly incentivize solar PV and other distributed energy resources.”