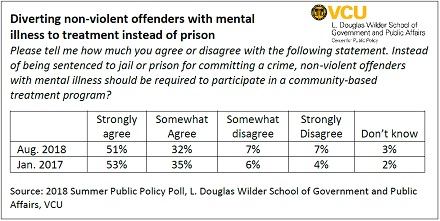 More than 8 in 10 Virginians favor letting nonviolent offenders with mental illness participate in community-based treatment programs instead of being sentenced to prison or jail, according to a new statewide poll by the L. Douglas Wilder School of Government and Public Affairs at Virginia Commonwealth University.

A large majority, 83 percent, strongly or somewhat agreed with a community-based treatment option for nonviolent offenders with a mental illness. A slight majority (51 percent) strongly agreed. Only 14 percent strongly disagreed or somewhat disagreed.

These findings are statistically unchanged from a 2017 poll that found that 53 percent strongly agreed with diversion of nonviolent offenders with a mental illness to community-based treatment programs.

The poll, a random sample of 802 adults in Virginia conducted by landline and cell telephone from July 10-30, has a margin of error of 3.49 percent.

“Since its creation in 2014, the Deeds Commission has focused on improving Virginia’s mental health system in areas such as criminal justice and emergency services,” said Robyn McDougle, Ph.D., director of the Wilder School’s Center for Public Policy. “These findings indicate the public is strongly in support of getting persons suffering mental illness who commit nonviolent crimes the treatment they need in community settings, rather than requiring the commonwealth’s jails and prisons to treat them within a prison setting. These types of policy findings are of significant interest to decision-makers such as those who serve on the commission.”

In previously released results that speak to mental health issues, more than 8 in 10 respondents (81 percent) strongly agreed or somewhat agreed that public schools should provide mental health services to students as a core part of their mission, with 49 percent agreeing strongly.

Respondents also were asked their opinion on approaches to addressing issues of school safety, specifically whether to use additional security measures or the mental health system. Respondents were closely split, with a plurality of 41 percent (down from 56 percent in 2017) saying that additional security measures was the right approach to address school safety while 36 percent (up from 27 percent in 2017) thought that safety issues should be addressed through the mental health system. Twenty percent (up from 11 percent in 2017) volunteered that both approaches should be used.

As part of its mission to inform public policy and decision-making, the VCU Wilder School is partnering with the VCU Department of Psychiatry and the Joint Subcommittee to Study Mental Health Services in the Commonwealth in the 21st Century (also known as the Deeds Commission) to host a half-day “Mental Health Mini-University” at the state Capitol on Thursday, Sept. 6, from 9:30 a.m. to 2 p.m.

This event will feature presentations on mental health and workforce development and the health effects of marijuana, alcohol and opioids. The event will include remarks by S. Hughes Melton, M.D., commissioner of the Virginia Department of Behavioral Health and Developmental Services.

For a PDF of the 17-page report on these poll results, including complete question wording and detailed tables of results, go to oppo.vcu.edu.