Majority of Virginians See Community Colleges, Public Universities as Worth the Cost 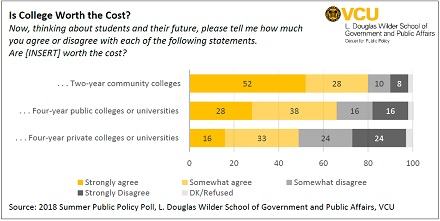 A majority of Virginians see two-year community colleges and four-year public universities as worth the cost, according to a new statewide poll by the L. Douglas Wilder School of Government and Public Affairs at Virginia Commonwealth University.

The poll, a random sample of 802 adults in Virginia conducted by landline and cell telephone from July 10-30, has a margin of error of 3.49 percentage points.

The same poll asked respondents to assess whether colleges overall and public high schools in the state are doing a good job on four workforce-related outcomes:

“We often hear that a college education is a key factor in individual success,” said Robyn McDougle, Ph.D., director of the Center for Public Policy at the Wilder School, “but the Virginia public appears to see colleges as a definite step up in preparing the commonwealth’s collective workforce as well.”

Both high schools and colleges received positive ratings from the largest portion of the population in the area of producing graduates in scientific fields. Seventy-five percent of Virginians said colleges were doing a good job in this area; 57 percent said the same about high schools.

In all other categories, roughly the same portion of respondents said high schools were doing a good job as said they were doing a bad job. There were strong regional differences. With the exception of the category of producing graduates in scientific fields, the residents of the south-central region show the most negative evaluation of high schools, while Northern Virginia and the west region consistently show the most positive.

For a PDF of the 33-page report including complete question wording and detailed tables of results, go to oppo.vcu.edu.