Wilder School Poll: Police Should Have Ability to Restrict Weapons at Protests, Other Public Demonstrations 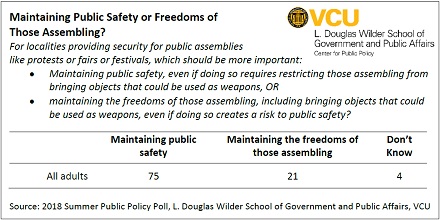 On the eve of the one-year anniversary of the violent white nationalist rally in Charlottesville, Virginians favor giving law enforcement the ability to restrict weapons at public protests and other assemblies, according to a new statewide poll by the L. Douglas Wilder School of Government and Public Affairs at Virginia Commonwealth University.

The poll, a random sample of 802 adults in Virginia conducted by landline and cell telephone from July 10-30, has a margin of error of 3.49 percentage points.

The poll also found that Virginians favor giving local authorities the ability to remove a person’s personal firearms if a court finds they exhibit dangerous behavior.

Eighty-five percent of Virginians strongly or somewhat agree that local authorities should be able to remove a person’s personal firearms for up to one year if a court hearing finds that they have exhibited dangerous behaviors to themselves or others. Thirteen percent of respondents either somewhat or strongly disagreed, while only 2 percent were undecided.

Analyzing the demographic breakdown of opinion on the firearms removal question shows that all but one demographic group have a majority that strongly agree with authorities having such an ability. The one exception is self-identified Republicans, of whom 45 percent strongly agreed with the policy. This compared to 61 percent of independents and 69 percent of Democrats who strongly agreed.

“Local authorities, including those in Charlottesville a year ago, and again this weekend on the anniversary of the violent demonstrations, face continual challenges to find the right balance between public safety and maintaining constitutional freedoms to assemble, protest and bear arms,” said Robyn McDougle, Ph.D., director of the Wilder School’s Center for Public Policy and an associate professor of criminal justice. “These findings indicate that most of the public want authorities to prioritize safety.  How to do that while not violating legal freedoms upheld by our courts is a tough challenge as policymakers look to develop effective best practices.”

In addition to questions of public safety and local government, the poll also examined areas of local social equity policy, including access to healthy food and fair rent practices.

Efforts to reduce or eliminate food deserts were increasingly visible in recent years as former Virginia first lady Dorothy McAuliffe promoted awareness of improved nutrition. When asked the biggest problem they faced in accessing healthy food in their neighborhood, 70 percent of respondents reported they had no problem accessing healthy food. Of the 30 percent who did have a problem with healthy food access, the reasons selected split among the cost of food (19 percent), transportation issues (8 percent) and not knowing where to go to find healthy food (1 percent).

For a PDF of the 17-page report including complete question wording and detailed tables of results, go to oppo.vcu.edu.