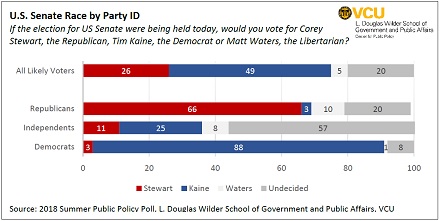 Stewart is attracting only 66 percent of Republican or Republican-leaning respondents so far and trailing Kaine by more than a 2-to-1 margin among those independents who have already decided for whom they will vote. By contrast, Kaine has the support of 88 percent of Democrats.

The poll also asked respondents which party they would rather see in control of Congress. A narrow majority of 51 percent of respondents said they would rather see the Democrats control Congress. That compares to 32 percent who would prefer Republican control, giving a 19-point margin to Democrats, a finding that may indicate a possible blue wave in several congressional races. A stronger alignment among Democrats (91 percent prefer Democratic control of Congress) than among Republicans (where only 80 percent prefer Republican control and 16 percent are undecided) appears to drive the Democrats’ lead and may indicate some level of tension between the preferences of Virginia Republicans and the national leadership of the Republican party. Independents, on the other hand, are still mostly (57 percent) undecided.

In other findings, the poll shows that only 16 percent of Virginians want the Virginia General Assembly in charge of legislative redistricting after the 2020 census — 24 percent favor a panel of local and state experts and 20 percent favor a citizen commission.

For a PDF of the 22-page report, including complete question wording and detailed tables of results, go to oppo.vcu.edu.

On Friday, Aug. 10, the Wilder School’s Center for Public Policy will release further poll results measuring Virginians’ views on several policy issues facing localities, including whether localities should be able to restrict the carrying of weapons at public gatherings such as protests or festivals.