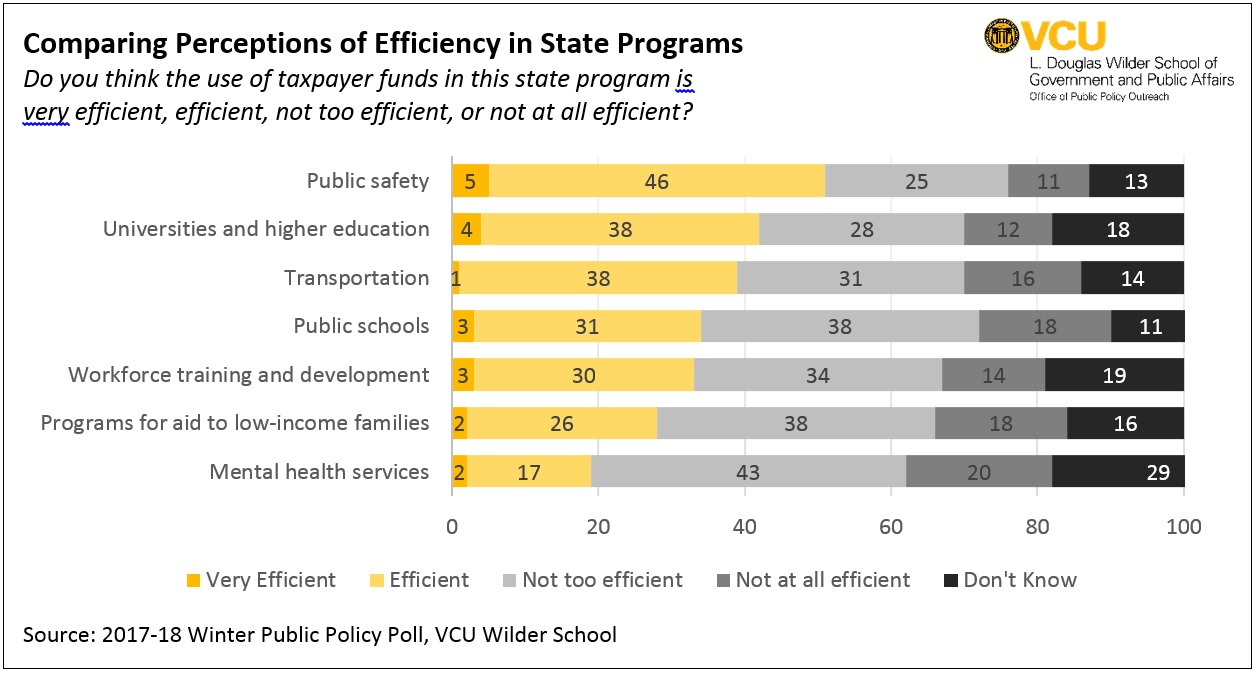 Only one state program area — public safety— is thought of as efficient or very efficient by a majority of Virginians, according to a new poll by the L. Douglas Wilder School of Government and Public Affairs at Virginia Commonwealth University.

The poll, a random sample of 788 adults in Virginia conducted by landline and cellular phone from Dec. 8-26, has a margin of error of 3.49 percentage points.

The next highest combined response for the two “efficient” categories was 42 percent in the case of universities and higher education, followed by transportation (39 percent), public schools (34 percent), workforce training and development (33 percent), programs to aid low-income families (28 percent) and mental health services (19 percent).

The poll also asked respondents whether they would be willing to pay more in taxes to keep funding for the same seven program areas at current levels.  The program with the lowest perception of efficiency — mental health services at 19 percent — is also the program area that the highest portion of the population (70 percent) would be willing to pay more taxes to keep funded at current levels.

“We were surprised,” said Robyn McDougle, Ph.D., interim director of the Wilder School’s Center for Public Policy, “because comparing perceptions of efficiency on one hand to willingness to support a program through tax dollars on the other shows little evidence of a connection between the two. It’s possible that people see their willingness to pay more in taxes as a signal of the moral importance of a program, rather than an evaluation of the program’s efficiency.”

Estimations of efficiency show significant differences along key demographic categories with partisan identity the only significant factor in all program areas. In each program area, political independents were the most likely group to view a program as inefficient in its use of taxpayer resources.

Public schools, judged by 56 percent as “not too/not at all efficient,” were seen more frequently as inefficient in the South Central (68 percent) and West (66 percent) regions compared to the Northwest (55 percent), Tidewater (54 percent) and Northern Virginia regions (44 percent). Likewise, parents of a public school student identified schools as inefficient more often than did nonparents (67 percent compared to 52 percent).

For a PDF of the 19-page report including complete question wording and detailed tables of results, go to www.oppo.vcu.edu. Also available are recently released poll results about Virginians’ views on opioids; public safety, economic development, and K-12 and higher education; Confederate monuments; and what factors contributed to their decision when voting for governor in November.