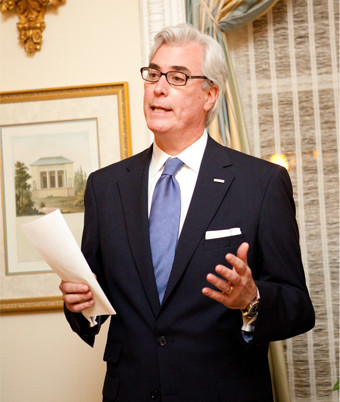 ‌Greg Wingfield, a VCU alumnus and senior fellow at the Wilder School’s Center for Urban and Regional Analysis (CURA), has been recognized by the Richmond Times-Dispatch as one of 30 top individuals who have shaped our community over the past 30 years.

Wingfield (B.S., ’74, MURP, ’76) was cited for his decades-long involvement in promoting regional economic development. He served as the first president and CEO of the Greater Richmond Partnership (GRP), a public-private organization that promotes the region and recruits businesses, leading the organization for 21 years. Upon his retirement last year, he joined the Wilder School and also started GH Wingfield Consulting LLC, working with regional economic development groups in the Southeast.

During Wingfield’s 21 years at the helm of GRP, the partnership drew businesses that invested a total of $10.8 billion and created about 55,000 net new jobs. At the Wilder School, Wingfield has been instrumental in aiding CURA’s efforts to create a Metropolitan Export Strategy, which will be unveiled on Sept. 8.

“This is a huge honor not only for me, but for everybody who has contributed toward making the Richmond region an economic force in our global economy,” Wingfield said. “I am glad to be able to continue to serve business, government and nonprofit organizations at the local and regional levels through CURA.”

The Times-Dispatch honored Wingfield as part of its 30th anniversary celebration of publishing Metro Business, the weekly section that appears every Monday, which also recognized 30 top companies at a breakfast at The Jefferson on June 28. Other VCU-related individuals lauded include former president Eugene P. Trani and Stuart C. Siegel, a former rector who served on the Board of Visitors from 1989 to 1997 and again from 2005 to 2013.