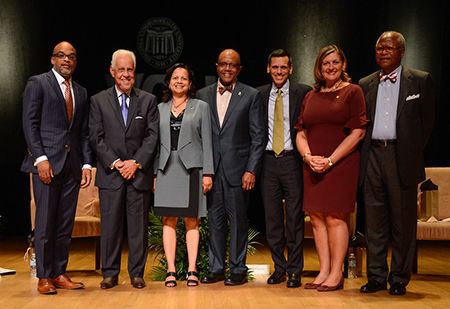 In a year marked by one of the most meaningful and sustained inquiries into the history of African peoples in America in recent cultural history, the 2019 Wilder Symposium provided a personal and unflinching look at race and inclusion in higher education as told from the perspective of four Virginia college presidents.

“I do think it’s time in this 400 years observation of Africans being brought to these shores that we candidly access the impact and the effects of the descendants of those first brought here,” said Wilder in his opening remarks. “I am personally sickened by those whose simplistic solutions amount to ‘let’s have a conversation’ on one thing or another. I can tell you that the one thing that has permeated the very fabric of our society for the past 400 years, has been race.”

Each panelist was challenged to explore the role of a chief educational officer in combatting structural racism, as well as the cultural and institutional practices at their respective institutions that work to either reinforce or mitigate racial inequity. Watch the video.

It was a thought-provoking discussion that allowed each panelist to reflect, at times quite personally, on the difference between the origin stories of their institutions and the ethos needed to ensure access and educational success for minorities today.

“Higher education today continues to be largely set up the way it was 1,000 years ago in Europe and 400 years ago in this country, and that doesn’t necessarily fit all the way in which we’ve all grown up and it certainly does not pull the potential out of all of us,” said Michael Rao, Ph.D., president of VCU.

The thought-provoking discussion allowed panelists to recognize and reflect on how the history of education and the foundation upon which each of their institutions were built looks very different from what is now needed to ensure access and educational success for minorities today.

The persistence of achievement gaps among minority and low-income students in K-12 education was also recognized as a significant barrier to inclusive enrollment.

“While the signs don’t exist in the same way -- they don’t say white and colored -- many of the things that we use to bring young people into the institution, by definition, those things, are separated and divided by race,” said Makola Abdullah, president of Virginia State University. “Whether we are looking at what high schools that we recruit from, different zip codes, or whether we are looking at SAT or ACT scores, or even whether people have had quality access to test prep classes or to AP courses, there is still logically a divide of race that occurs before you even get to higher education.”

Diversity and inclusion centered much of the discussion with panelists highlighting its importance and the threat that a lack of diversity among students, faculty and staff, poses to educational institutions.

“I really believe that higher education and institutions in this country are one of the most important engines to ensure the longevity of our democracy in the United States of America and right now, I think that is being threated because people are in silos. People are only talking to people who agree with them and that plays itself out on colleges campuses as well,” said Ronald Crutcher, president of the University of Richmond.

According to a study in 2016 conducted by PRRI (Public Religion Research Institute) shared by president Crutcher:

“In the academy, we need to create spaces where people of every race and ethnicity can speak about these issues in a candid way where people don’t feel judged if they say the wrong thing or something that is perceived to be wrong,” stated Paula Pando, president of Reynolds Community College

Although a challenging topic for a dynamic panel, each panelist appeared to be united by a steadfast commitment to making progress and a willingness to challenge bias—both structural and procedural—within their own institutions.

“There is still so much more work that needs to be done to make sure that young people, and young at heart people, who are motivated, who are talented, and can take advantage of quality education opportunities that exist at all of our institutions -- that they get a chance to do that,” said president Abdullah.

Each agreed that leadership plays a crucial role in moving the needle towards addressing and ending racism in academia now and in the imminent future.

“The reality is that there are specific things that we can do. We have our voices and can use our podium as leadership to create change,” noted president Rao.