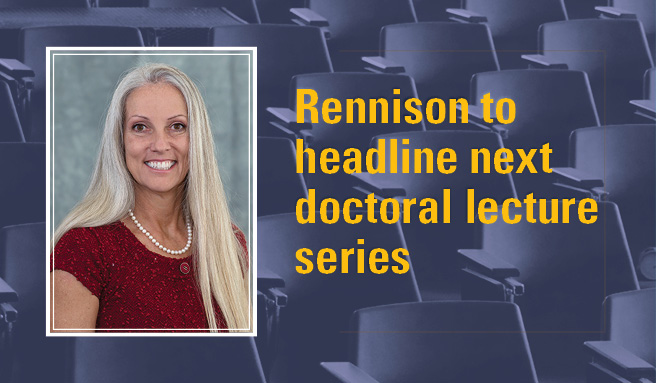 The next installment of the Wilder School Doctoral Lecture Series in Public Policy will take place on Monday, October 28. The event will feature Callie Rennison, Ph.D., a noted professor and criminologist at the University of Colorado Denver.

The next lecture in the Wilder School Doctoral Lecture Series in Public Policy will feature noted author and criminologist, Callie Rennison, Ph.D.

The lecture series gives doctoral students the opportunity to learn from and engage with leading scholars in a variety of fields related to public policy. A total of four speakers will come to campus during the 2019-20 academic year, two in each semester. The lecture series is geared to graduate students, faculty and alumni of our Ph.D. program, and it is open to public.

The first lecture, which featured Norma Riccucci, Ph.D., Board of Governors Distinguished Professor in the School of Public Affairs and Administration Rutgers University at Newark, took place on September 30.

Rennison is a professor and former associate dean of faculty affairs at University of Colorado Denver’s School of Public Affairs.  Prior to joining the school, Rennison served as director of the Office of Equity and Title IX coordinator for both the CU Denver academic and medical campuses. Her talk, “From Here to There, to Where? The Life Course of One Academic,” will explore her personal journey within academia.

Rennison’s work focuses on the nature, extent and consequences of violent victimization with an emphasis on research methodology. Her scholarship has appeared in numerous peer-reviewed journals including the Journal of Quantitative Criminology, Justice Quarterly, Violence and Victims, and Violence Against Women. Rennison is also the co-author and editor of several books including “Introduction to Criminal Justice: Systems, Diversity and Change” the “Wiley Handbook on the Psychology of Violence,” the “International Handbook of Violence Studies.” Her newest book, “Women Leading Change in Academia: Breaking the Glass Cliff, Ceiling and Slipper,” co-edited with Amy Bonomi, Ph.D., was published just last month.

Rennison’s research is bolstered by substantive contributions to the field, including service on the National Academy’s Committee examining domestic sex trafficking of minors in the United States and a previous stint as a researcher at the Department of Justice's Bureau of Justice Statistics. She is the 2016 recipient of the Bonnie S. Fisher Victimology Career Award presented by the Division of Victimology from the American Society of Criminology.

Rennison earned her Ph.D. in Political Science from the University of Houston, University Park, where she also received a B.S. in Psychology, an M.A. in Sociology and M.A. in Political science

Additional dates and speakers for the 2019-20 Wilder School Doctoral Lecture Series in Public Policy include: