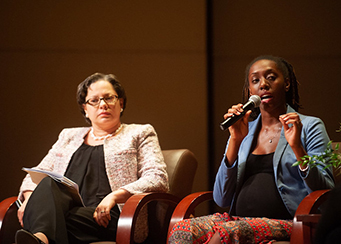 Panelists Virginia State Senator Jennifer McClellan and Jackie Storey, director of Six Points Innovation Center, discuss the role of law and policy in preventing evictions within the region on September 26.

“There are many ways in which people’s housing situations are unstable and eviction is one manifestation of instability as well as the cause of it,” said Benjamin Teresa, Ph.D., an assistant professor of urban and regional planning at the Wilder School and one of several principal organizers of the panel.

“Moving beyond the numbers means foregrounding how people experience eviction and housing instability. These impacts are not limited to the evicted, a renter, or even a family member, rather they are felt across the community,” said Teresa.

The panel involved an interactive display created by the youth of the City Builders program and gathered panelists Jackie Washington, director of Six Points Innovation Center, Phil Story, Campaign to Reduce Evictions (CARE) attorney at the VA Poverty Law Center and Virginia State Sen. Jennifer McClellan to discuss the causes and consequences of housing instability and the legislative solutions being proposed to fix it.

Megan Pauly, a radio journalist with VPM News and frequent contributor to the year-long series, “Where We Live,” served as moderator. Where We Live is part of an ongoing series looking at a range of issues, from affordability and housing policy, to homelessness and segregation.

Teresa opened the program by presenting findings from the RVA Eviction Lab, a think-tank designed to examine evictions in the Richmond area and support the work of local government, community-based organizations, elected officials and other advocates.

In 2018, Teresa and Wilder School colleague and faculty member Kathryn Howell, Ph.D., co-founded the RVA Lab to build a database on Richmond evictions at the ground level. Since then, they’ve been awarded a $30,000 grant from the Ford Foundation to support their work. Their goal? To dig into the reasons why Richmond has the second-highest eviction rate in the United States and to generate data and analysis that will have a practical effect in reducing evictions in Richmond.

The panelists’ discussion highlighted many of the traumatic effects of eviction on the community, especially youth and how the Eviction Legal Helpline, launched by the Virginia Poverty Law Center (VPLC), has helped to improve the region’s eviction response.

“Some of our youth were able to sit in on some of the hotline calls, and to observe firsthand how serious this issue is,” said Washington. “A lot of times they are told about things in school or we mention it to them at the community center, but we just need for them to see someone else, that’s not who they see every day, coming in and saying that this is an actual issue that’s going on in your city, the nation, but especially in their city.”

Each panelist agreed that the law and policies in place play a huge factor in eviction prevention.

“We explain to tenants this is what the law looks like and begin to explain to them how the law works. It lets people play realistically and helps them understand,” said Story.

McCllelan shared the importance of recognizing that there is a shortage of affordable housing and shed light on seven legislative changes that were made in the 2019 session to help with the prevention of eviction.

“The arguments are really trying to balance landlords who have bills to pay and people to pay, and tenants who are just trying to live,” said McClellan.

The dialogue on eviction will continue with a public lecture by Matthew Desmond, author of “Evicted,” at 6 p.m. on Wednesday, October 16 at the Stuart C. Siegel Center, 1200 W. Broad St.

Eviction isn’t just about poverty. It’s also about race — and Virginia proves it. 11/10/18