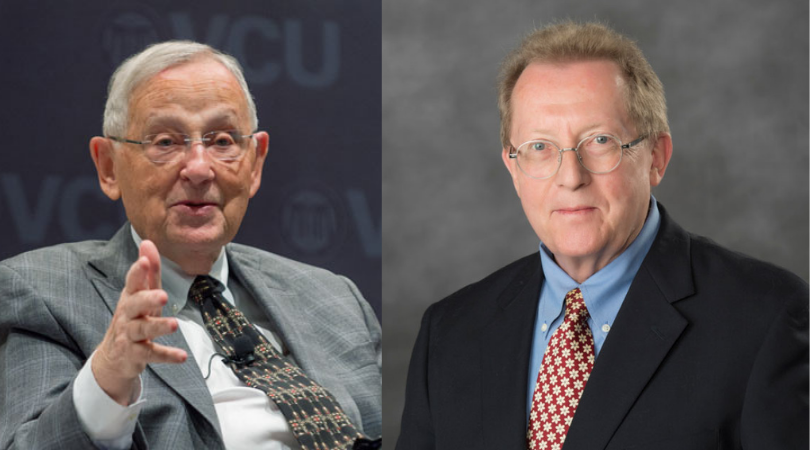 When Dr. Eugene Trani arrived in Richmond in 1990 to become VCU’s fourth president he faced community neighbors and legislators opposed to university’s master plan, a city in serious decline, and some who wondered if VCU and downtown were doomed.

But that’s not where his book, “Fulfilling the Promise, Virginia Commonwealth University and the City of Richmond, 1968–2009,” coauthored with John Kneebone, Ph.D. begins.  The first chapters explore the early history of VCU when the Richmond Professional Institute (RPI) and the Medical College of Virginia were merged to form Virginia Commonwealth University.  A discussion with Trani and Kneebone, led by VCU Libraries Dean Emeritus John Ulmschneider, kicked off the 2021 season of the Wilder School’s Alumni Lunch and Learn series on Friday, January 22.  The program was cosponsored by the Wilder School and the Grace E. Harris Leadership Institute.

Dr. Kneebone summarized the accomplishments and challenges of the three presidents who preceded Dr. Trani, including VCU’s first president Warren Brandt, who was tasked with the challenging process of bringing the two campuses together.  Kneebone said T. Edward Temple’s brief tenure was focused on building VCU into a comprehensive university.  The University’s third president, Edmund Ackell, focused on building the university’s research capacity. “Ackell’s style was tough.  He fought with students – never a good idea -- and got crossways with the student newspaper,” Kneebone recalled.

Dr. Trani recollected that early in his nearly 20-year tenure, he made three important decisions:  growing the student body to give the University the “critical mass” to become a top urban research institution; physically expanding the campus, but not expanding south into Oregon Hill; and nurturing and supporting entrepreneurial ideas and projects.  Trani recounted convincing Governor L. Douglas Wilder to come to VCU after his term as Governor, noting that Governor Wilder remains a professor of distinction.  He recalled the formation of the Center for Public Policy in 1994, creating the Ph.D. in Public Policy, and eventually forming the Wilder School.  “That sense of entrepreneurialism is what created the Wilder School,” Trani told participants.

Questions from the audience included a discussion of VCU’s long-standing commitment to attract students, faculty, and administrators of color, including Dr. Grace Harris who served as Provost during Trani’s tenure.  Kneebone called RPI and then VCU “quietly progressive,” during a time of massive resistance, noting that it enrolled the highest number of African American students outside of Virginia’s HBCUs at the time.

Dr. Trani ended his portion of the presentation quoting from former UVA President John Casteen’s endorsement of the book, which he describes as important for anyone who cares about Richmond and the intensely personal experiences of the women and men who built a great university.

“And that is what VCU is – a great university of the Commonwealth built by many, many great people, including Dr. Grace Harris,” Trani said.

GEHLI Director Nakeina Douglas-Glenn noted that “Fulfilling the Promise” is now part of the curriculum for the Leadership Development Program, GEHLI’s flagship program now starting its 20th cohort.  All author royalties from the book are being donated to the VCU Foundation in support of student scholarships.  You can purchase “Fulfilling the Promise” directly from the University of Virginia Press.  To watch the recording of the January Lunch and Learn, follow this link.

The February Wilder School Alumni Lunch and Learn program will feature Dr. William Spriggs, professor of economics at Howard University and chief economist for the AFL-CIO on February 17.  Registration now.