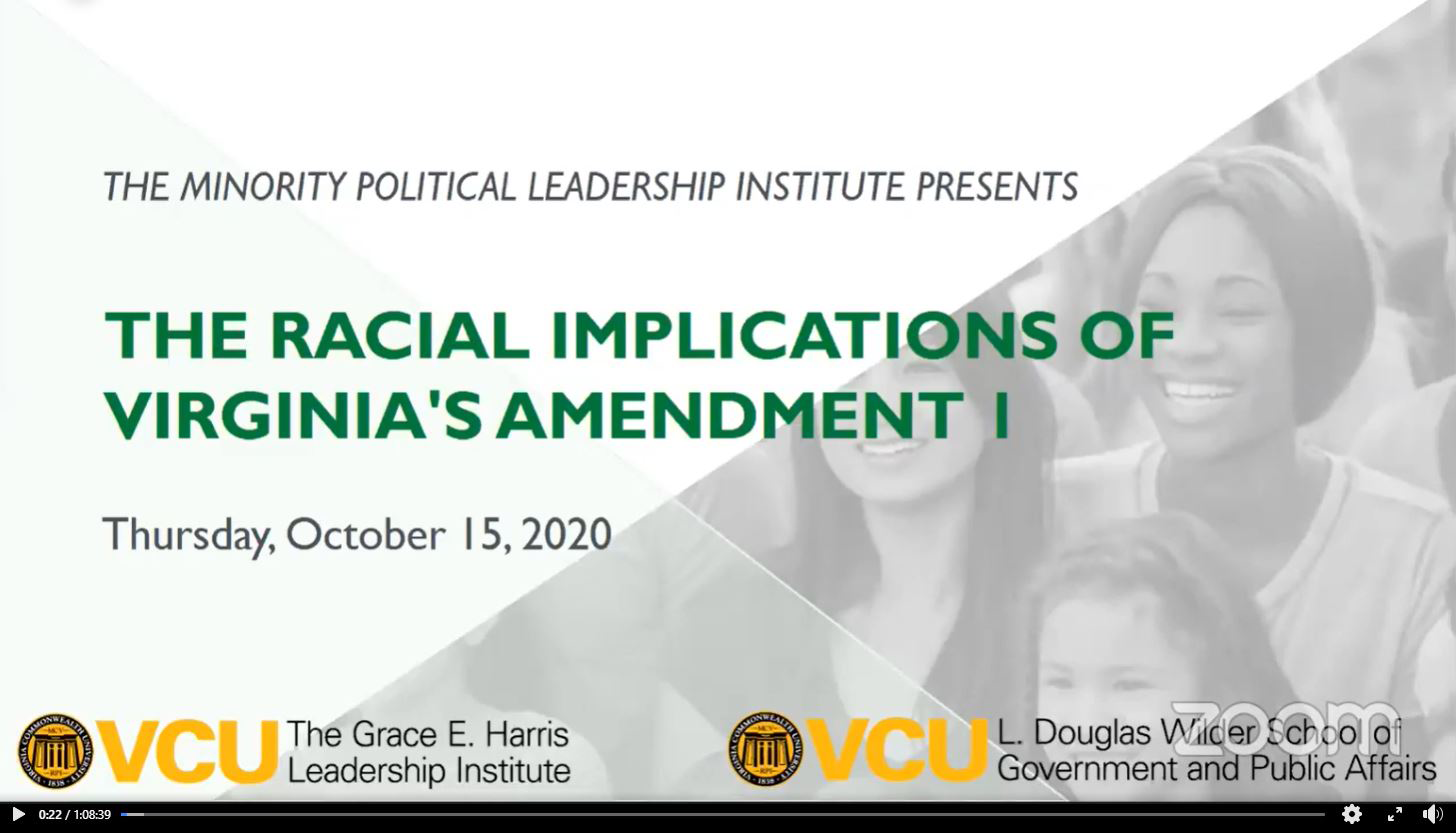 To help us better understand and unpack the racial implications of the amendment, the Wilder School’s Grace E. Harris Leadership Institute and the Minority Political Leadership Institute hosted a lively virtual discussion featuring state policymakers and thought leaders on the subject.

For Virginians who are are preparing to vote in this year’s historic election, it’s not just the presidency that’s at stake. On Nov. 3, voters across the commonwealth will be facing a vote on Constitutional Amendment 1, an amendment that would cede the process by which Virginia draws its legislative and congressional districts to a bipartisan commission of legislators and citizens.

The amendment, which would in effect remove redistricting from the hands of the state legislature exclusively, has been characterized as a once-in-a-generation opportunity to reimagine the redistricting process. Nonetheless, the amendment has drawn equal parts support and criticism from both sides of the aisle.

To help us better understand and unpack the racial implications of the amendment, the Wilder School’s Grace E. Harris Leadership Institute  and the Minority Political Leadership Institute hosted a lively virtual discussion featuring state policymakers and thought leaders on the subject.

For those unfamiliar with the proposed amendment, the ballot question reads as follows:

Del. Rasoul, a proponent of the amendment said that by making the process of redistricting a more public one Constitutional Amendment 1 gives citizens the power to stop politically motivated redistricting before it happens, for the first time in their lives.

“Eight legislators will be chosen by leadership. Republicans and Democrats will each choose four of the legislators. The amendment states that each leader will pick at least 16 citizens from the commonwealth and then a group of judges are chosen and will evaluate the list and see who the eight citizens may be,” said Rasoul.

“It’s a small step in the right direction.”

Del. Aird, who is against the amendment, felt it was important to contextualize the decision.

“My opposition to this amendment is purely about misrepresentation,” she said.

“When you think about the racial history that the commonwealth has had even after more than 400 years, we are still trying to repair and relay the foundations of systemic systems that have caused harm to black and brown people,” said Aird.

“This amendment is flawed. It is structured in a way that quite frankly diminishes the power of the people sitting on the commission. Why should we ask black and brown communities to trust this?”

Keena, Barnette and Riggs focused their comments on the history gerrymandering and its deleterious effects.

“The way that gerrymandering works is essentially dividing voters based on a certain category, party affiliation or race to achieve a political objective,” said Keena.

He didn’t have to look too far back for evidence.

He cited the 2011 actions of Virginia Republicans who ignored the suggestions of a bipartisan commission appointed by a Republican governor to achieve a supermajority by using race or partisanship as a factor in redistricting.

The move, said Keena, had allowed Republicans to dilute the electoral power of African Americans in Central and Eastern Virginia by drawing them into large majority black districts.

Last year, weeks before the primary election, a federal court interceded redrawing the maps and appointing a special master to do so. Overnight, Democrats took the House of Delegates back.

“Racial gerrymandering is a problem and politicians just ignore the rules. I think there are wonderful legislators who are doing the right thing, but I am not naïve and trust all legislators to have our best interest,” he said.

Barnette said the NAACP is against the proposed amendment for various reasons and that voters should be choosing their legislators and not the other way around.

“This amendment is not bipartisan and does not protect people of color. It’s not close to being right and protecting the citizens of the commonwealth,” said Barnette.

“I think we need to look at past history. Legislators have thrown black and brown people under the bus and used us. This amendment is not even close to protecting citizens.”

Riggs, whose voting rights work focuses on fighting for fair redistricting plans, fighting against voter suppression, and advocating for electoral reforms that would expand access to voting, gave some historical context and thoughts behind gerrymandering.

“I think it’s important to acknowledge that gerrymandering has been used as a tool to dilute the voice of voters of color for decades,” said Riggs.

“That truth needs to be central to any discussions of a remedy. You can’t discuss an effective remedy without centralizing the perspective and voices of those who have been harmed by gerrymandering. What I want to see are folks who are engaged and citizens have not really been brought into the process to understand it.”

One sentiment that united each of the panelists was that representation matters and that more language and safety measures need to be enacted to better protect black and brown citizens in the commonwealth.

“I would have been happier if the amendment would have some of the other criteria that we passed in other legislation. It would have further improved the doctrine. We must be mindful to have diverse representation,” said Rasoul.