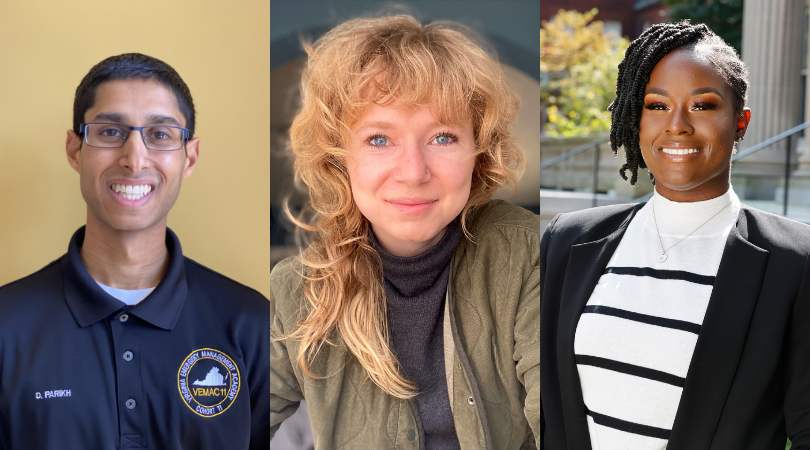 An outbreak of a deadly and highly contagious disease has just occurred, and the country’s leadership is faced with an array of difficult life-or-death policy decisions. Do they close the borders? Should they implement mandatory face masks? Who should be tested — everyone or only symptomatic people? If a vaccine can be developed, at what stage of safety testing should it be released to the public?

That scenario — echoing the COVID-19 pandemic and response — was a simulated exercise faced by teams of graduate students in public policy, administration and related fields who participated in a recent international competition that judged them on how well they managed a fictional pandemic based on real-world data.

Winning first place was a team that included Darshan Parikh, assistant director of emergency preparedness at Virginia Commonwealth University and a master’s degree student in the Homeland Security and Emergency Preparedness program in VCU’s L. Douglas Wilder School of Government and Public Affairs.

Parikh, along with three randomly assigned teammates from New York University, the University of Missouri and the University of North Carolina at Chapel Hill, beat out teams of graduate students from North and South America, Europe, the Middle East and Africa. Teams from Asia competed over the weekend.

“The goal was to get as many people vaccinated as we can, have the highest economic health score, and have the highest approval rating possible for our administration,” Parikh said. “At the end of the day, we ended up with something like 105 total cases and fewer than 10 deaths across the country. Our neighboring countries had hundreds of thousands or millions of each.”

The NASPAA-Batten Student Simulation Competition is organized by the Frank Batten School of Leadership and Public Policy at the University of Virginia and the Network of Schools of Public Policy, Affairs, and Administration. Susan Gooden, Ph.D., dean of the Wilder School, is vice president of NASPAA. First held in 2015, the student simulation competition uses a simulation developed by the Center for Leadership Simulation and Gaming at the Batten School that gives participants a chance to employ their knowledge in a realistic situation, as well as an opportunity to hone skills in leadership, negotiation and critical thinking.

As assistant director of emergency preparedness for VCU, Parikh was able to bring valuable real-world experience to his team. In his job, which is part of the VCU Police Department, Parikh has been involved in the university’s planning and preparations for COVID-19 since last March. He also serves as a supervisor of VCU’s contact tracing team, which tracks down and notifies those who may have been exposed to the coronavirus.

“[My experience at VCU] was a huge benefit because, when we were faced with questions in the competition like: Do we want to enable contact tracing? I had a good understanding of how that was going to help the situation. Because it really does in the real world,” said Parikh, who graduated from VCU in 2016 with bachelor’s degrees in Homeland Security and Emergency Preparedness and economics.

Parikh attributed his team’s success partly to good communication. They met virtually several times ahead of the competition to get to know one another, and to discuss their assigned country and decide on their general approach.

“We had to decide: Do we want to come out the gate very aggressive or do we kind of want to play a little more conservatively and wait for that information to present itself?” he said.

They ended up opting to take an aggressive posture toward the simulated outbreak.

“We declared an emergency as soon as we had a single case in the nation. And then we were very aggressive about things like contact tracing. At one point we decided that, ‘Hey, we need to impose mask-wearing fines’ because initially our infection rate was pretty high,” he said. “We got ahead of it. And I think the biggest reason why was because we were very collaborative in all decisions that we made.”

“Homeland security is an inherently team-oriented field so working with other people, even team members you have never met, is consistent with what happens in many [Homeland Security and Emergency Preparedness] classes,” he said. “Darshan [Parikh] is the assistant director of emergency preparedness at VCU so he has real-world experience in pandemic response, the topic of the competition. Intellectual flexibility, problem solving, teamwork, these are all skills emphasized in homeland security and refined in HSEP classes. I know that all the HSEP students and Wilder School students who participated in this competition found it to be an excellent learning experience.”

“Having not participated in an academic competition since my fifth-grade spelling bee (I misspelled ‘column’), I was not sure what to expect — especially with it being virtual,” Stadlin said. “But surprisingly, our team meshed really well through Zoom and communication was effortless, even though we were all first-year participants.”

Stadlin said the competition gave her and her teammates an opportunity to weigh the pros and cons of public policy decisions that are necessary in a crisis.

“While it was hard to always make the right decisions to stop the simulated pandemic, we found success in sacrificing approval ratings for the health of our people by adopting a ‘We mean business’ attitude,” she said. “These decisions were long-term investments in the health of our country as our citizens were more responsive to increased restrictions when we aligned our political messaging with our approach.”

Stadlin, who graduated from UVA in 2018, added that the competition was also a valuable experience because it gave her a chance to collaborate with peers and expand her network as a graduate student, which has been difficult amid COVID-19.

“And absolutely, while this experience was not related to criminal justice, it provided me with an opportunity to collaborate with like-minded peers and expand my network as a graduate student, which has been difficult this year.

“I highly recommend that any students interested in government, foreign affairs or HSEP attend the NASPAA-Batten competition next year,” she said.

Parikh agreed, saying he is looking forward to the finals, in which his team will face the winners of the competition of teams from Asia. “I look forward to meeting graduate students and teams from other regions and representing VCU and the Wilder School at the global event in the next round of the simulation,” he said.