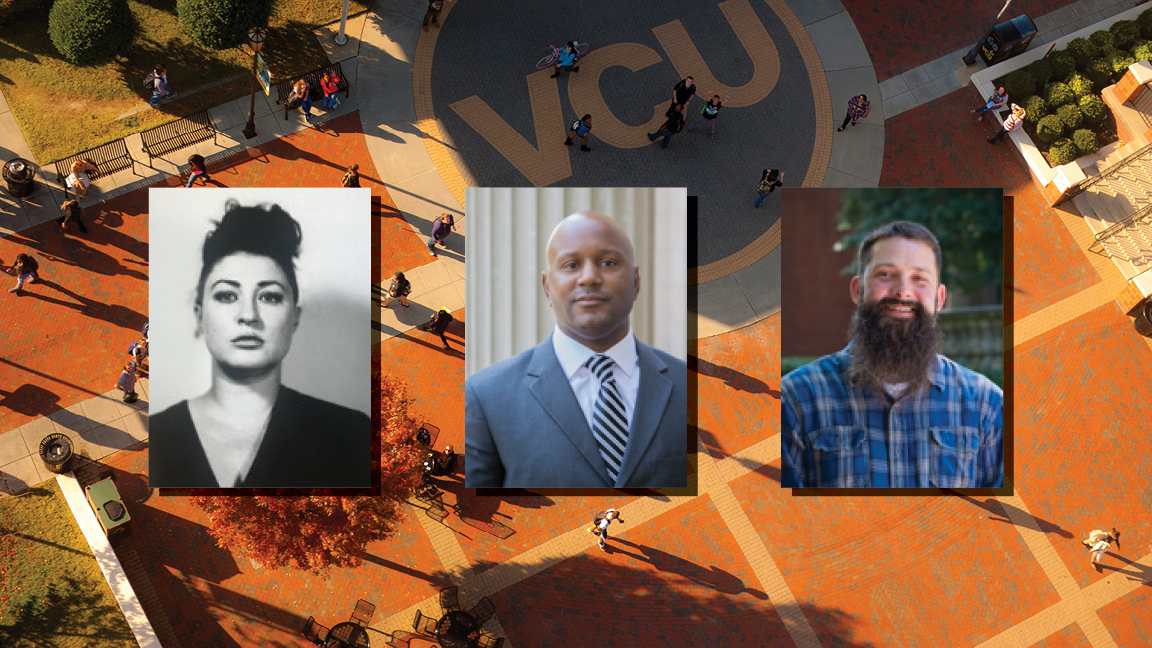 Three Wilder School alumni are among VCU's 10 under 10 this year.

The awards program honors alumni who earned their first degree—undergraduate, graduate or professional—from the university within the past decade and who have made important contributions to their community and loyally supported the university.

Learn more about who they are and how they are making an impact on their professions and the communities around them.

Ashley Hawkins was on the brink of leaving the VCU School of the Arts her junior year, when she started to etch, screen print and create lithographs. Her newfound passion reinvigorated her studies.

“I was a fearful painter and almost quit VCUarts but then found printmaking and immediately fell in love,” Hawkins says. “The process was freeing. I could make 10 or 1,000 prints. I could change the plate or the screen, I could draw on my prints, collage — I was no longer afraid of ‘messing up.’”

She knew that starting a community print shop was her calling and she did, at Richmond’s Plant Zero, after college. With eyes on establishing a larger collaborative space, in 2010 she opened Studio Two Three, Richmond’s only printmaking studio that’s open to the public. At the same time, she returned to VCU to earn a master’s in public administration with a concentration in nonprofit management.

“I am an artist and Studio Two Three is my life’s art project,” Hawkins says. “I am fascinated by the constant excitement and challenge of creating and managing a growing organization and remaining responsive to our community needs.”

Hawkins says it’s a dream responding to those community needs, which include creating a space that supports professional artists with tools to take their career to the next step. The studio offers classes, workshops and a retail store, among other features.

In 2017, Hawkins launched the Art of Activism series. The first session gave more than 200 participants the ability to make protest posters and ephemera before the women’s march in Washington, D.C.

“We will continue to offer opportunities to amplify our voices in our community, in a time when art has never been more important,” Hawkins says.

Hawkins says earning a B.F.A. at VCU taught her more than lessons in art; she walked away with real-world problem-solving skills.

“I tell our interns and students the biggest benefit of an arts education is that it taught me how to think,” Hawkins says. “I have taken that process and applied it to founding and managing a thriving arts organization in Richmond.”

LeQuan M. Hylton, Ph.D., began making an impact in Richmond, Virginia, almost immediately after he and his mom moved to the city in 1998.

Hylton saw the homeless in the city and wanted to do something to help, so he started an outreach program through his church, St. Paul’s Baptist Church.

“It was my first contact with people who were homeless,” he told Style Weekly in 2014 when he was honored as one of the city’s Top 40 Under 40. “And really, it bothered me that people lived in such conditions.”

Hylton, who received his bachelor’s in business from Virginia State University and his M.B.A. from Averett University in Danville, Virginia, continued to work on issues surrounding homelessness up until he came to VCU to earn his Ph.D. in public policy and administration from the L. Douglas Wilder School of Government and Public Affairs.

“VCU is a wonderful place,” Hylton says. “I chose to come to VCU because of the community engagement and outreach. I really enjoyed my learning experience, which involved the community.”

Hylton became the first member of his family to earn a doctoral degree when he graduated from VCU in 2010. His dissertation, “Perceptions of the Homeless Toward Nonprofit Human Service Providers,” focused on homeless people’s preferences for assistance services.

“Growing up in a rural community gave me a strong sense of caring for others,” says Hylton, who is from Martinsville, Virginia. “It was a loving place where I learned that if we could meet the needs of our family, extended family and others, then we ought to.”

His research at VCU led him and his mother, Sharon Hylton, to start Unified Properties LLC, a company that buys, renovates and leases quality and affordable houses and offices in the Tri-Cities area. Hylton also owns the real estate firm Hylton & Co. and a construction service company, Carver Builders.

His sense of service to those around him doesn’t end with his dedication to the homeless community. Last year, Hylton was deployed to Afghanistan, where he was in charge of the construction of multiple warehouses, maintenance shelters and offices, as part of his Army Reserve service, where he holds the rank of major. He has received numerous awards for his military service to include: two Meritorious Service Medals for military service, an Army Commendation Medal and the Military Outstanding Volunteer Service Medal.

“I continue to give back by any means necessary,” Hylton says.

Ryan C. Rinn spent his summers working at the local steel mill in his hometown of Seguin, Texas, just outside Houston. His father and grandfather both worked at the mill, but his parents — whom he credits with teaching him the importance of having a work ethic, patience and persistence — always encouraged him to leave Texas for college and to follow his dreams. He received his undergraduate degree at the University of Richmond, but it was at VCU, in a graduate class taught by Meghan Gough, Ph.D., assistant professor in the L. Douglas Wilder School of Government and Public Affairs, where he found his calling in urban planning.

Her Studio 1 class, centered on urban planning in Richmond’s Highland Park neighborhood, set the course for Rinn’s life. It’s there he began his work to revitalize the city’s historic neighborhood just north of downtown, a passion that still drives him today.

In 2013, Rinn was hired to serve as executive director of Storefront for Community Design, a nonprofit that, through low-cost design assistance and community engagement, links design professionals to design need. He accepted the position on the condition that Storefront would focus on community engagement in Highland Park. In the four years since Rinn has been at the helm, the organization has held more than 250 design sessions and 25 community advocacy events and has engaged more than 200 young people. Storefront also partners with VCU’s Middle of Broad studio, where students work on community design projects around Richmond.

Nonprofit director. Urban planner. Grassroots organizer. Community designer. Rinn proudly wears each of these hats and traces them back to VCU’s Wilder School, where, he says, he learned the tricks of the trade.

“The Wilder School of Government and Public Affairs allowed me to learn planning in an applied setting,” he says. “Two years in the field in graduate school helped me build community connections and friendships that I still lean on today for the betterment of our city.”