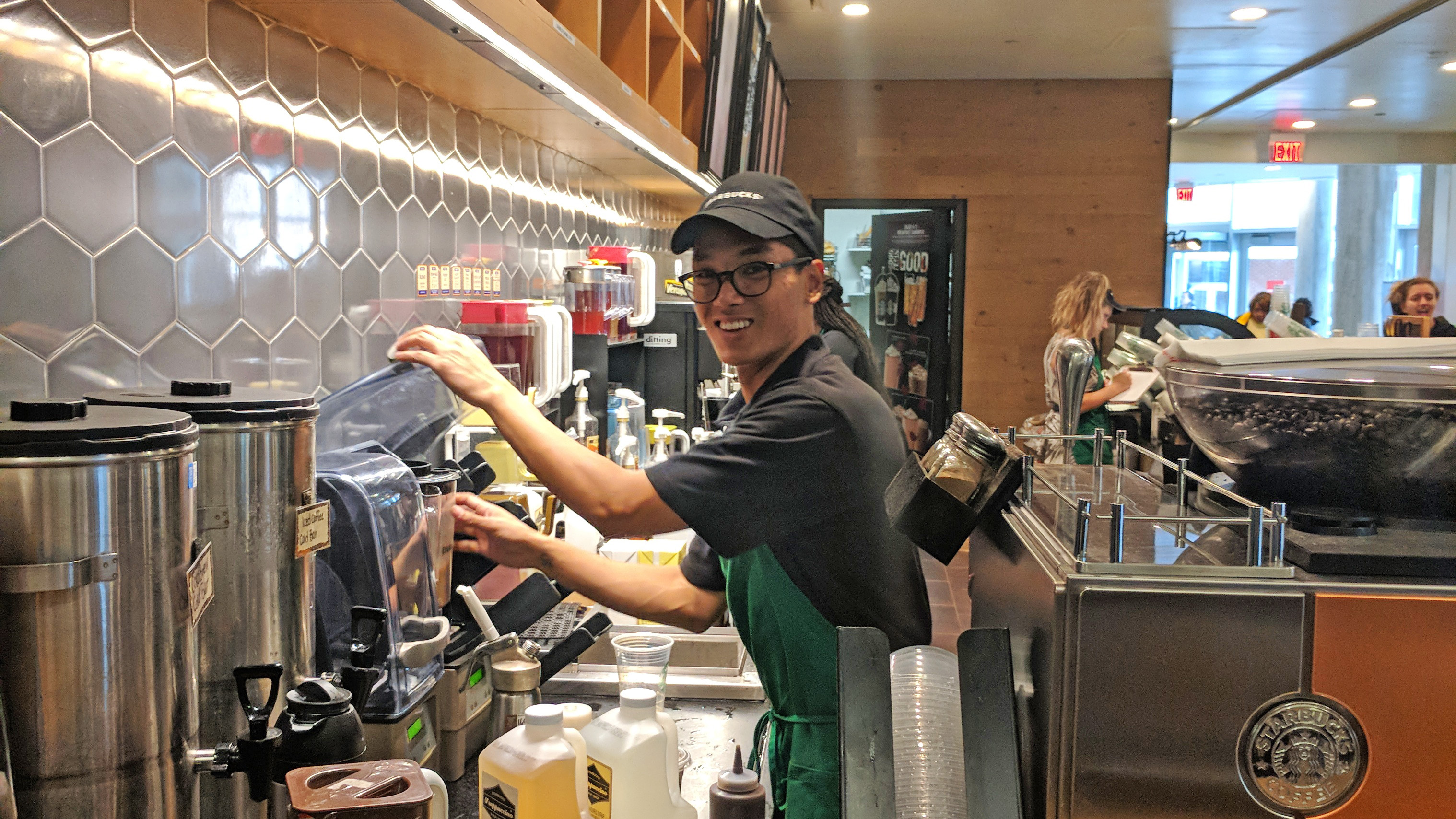 Alternating between classes and multiple part-time jobs is all in a day’s work for junior Zach Villegas. For this criminal justice and homeland security and emergency preparedness double major, balancing three jobs and 18 credits is simply a means to an end.

Villegas spends 20 hours of his week as a Federal Work Study employee at the Wilder School, where he has worked ably assisting faculty and staff for the last two years, and another 20 hours a week at the VCU Library as a Starbucks barista. On slow weekends, he moonlights at J. Kogi, a bustling Korean eatery in nearby Jackson Ward.

That doesn’t leave much time for sleep or study said Villegas, the only child of a single-parent immigrant from Myanmar.

“I draw my biggest inspiration from my mother,” said Villegas.

Growing up, his mother was “a spunky lady” who often worked long hours as a professional hair dresser.

“She’s the reason I work so hard,” Villegas said. “The reason why work-life balance is more of an aspiration than an expectation. As a child, I was always aware of her sacrifice—the extra shifts and clients that she picked up to make sure that I had everything I needed. She’s the hardest working person I know.”

By all accounts, the example set by his mother is paying off. In spite of—perhaps even because of—his hectic schedule, Villegas is flourishing.

“If anything,” said Villegas, a frequent face at the front desk of Scherer Hall, “being a working student has helped me to develop stronger time management skills and encouraged me to set and review my priorities on a regular basis.”

As a result, the Springfield, Va. native has maintained a 3.4 grade point average and is deeply engaged in both his studies and social activities. 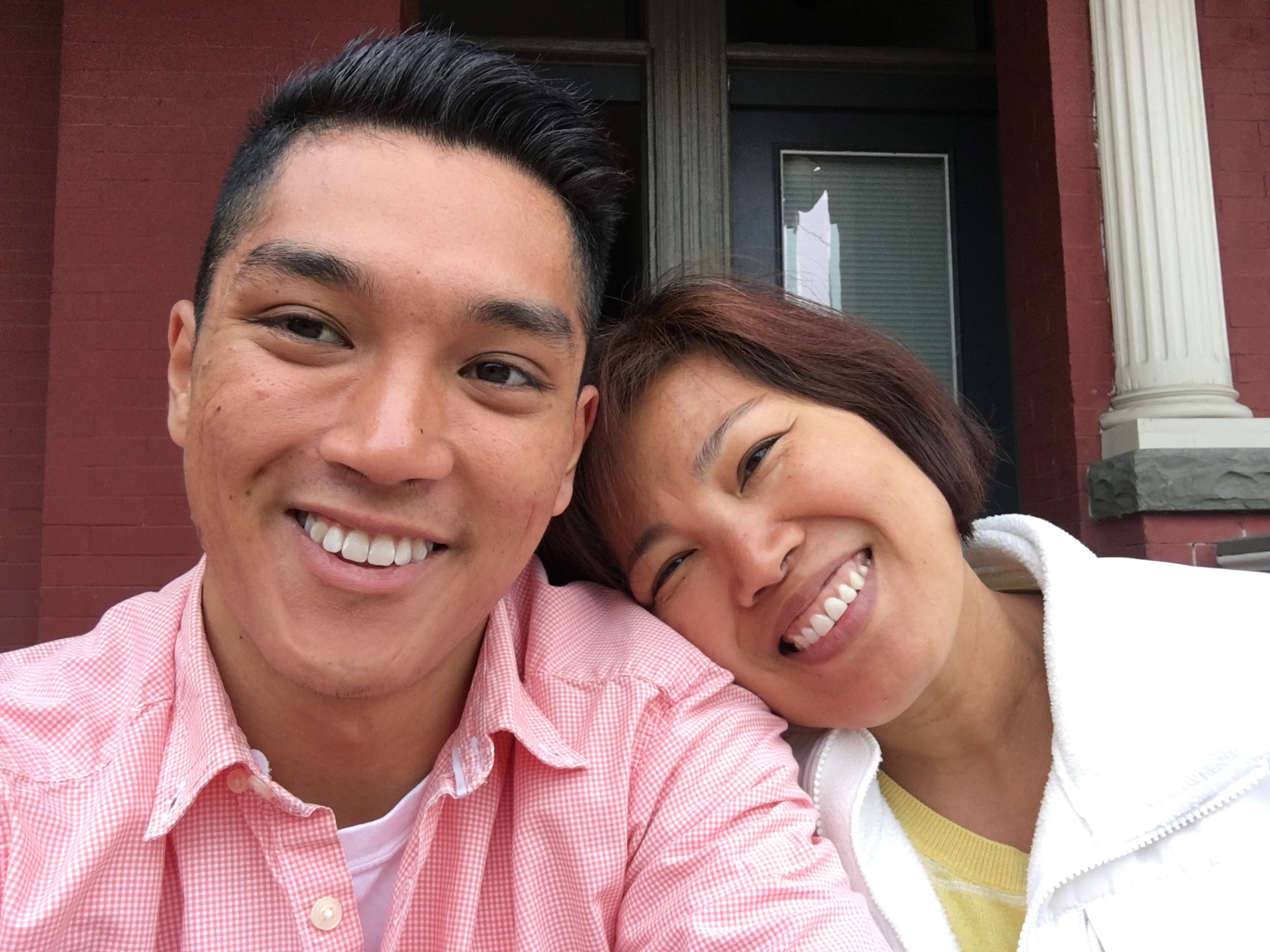 Over the past three years, Villegas has distinguished himself as a leader in the VCU community; His student activities resume includes two years of service as both a gradate and counselor at Ram Camp, a rigorous leadership development program for incoming freshmen, and a coveted student orientation leader appointment last summer.

This year, Villegas is the vice president of the Vietnamese Student Association and the community service chair of For the Children (FTC), an advocacy group that provides programming and services for underprivileged children in Richmond and throughout the world. Villegas also collaborated with his high school track coach back in Springfield to create a funded youth initiative that promotes healthy habits such as exercise.

When he’s not volunteering with the VSA or FTC, Villegas is actively working on his next passion project—a startup student organization that he calls the Joint Asian Organization at VCU.

According to Villegas, the Joint Asian Organization will serve as an umbrella organization for all Asian student groups at VCU and offer enhanced opportunities for cultural exchange between interested students as well as those with multi-ethnic Asian and Asian American identities.

Villegas, who hopes to serve as the organization’s founding co-president, said the group was inspired by his own experience as a mixed-race Asian American.

“Growing up as a mixed-race kid whose ethnic background includes Burmese, Korean and Spanish origins meant that I was very different than most of the kids who I encountered—both here at VCU and within the relative diversity of NOVA. That was a good thing—even if it wasn’t always widely understood,” he said.

“The Joint Asian Student Organization is an attempt to create a space where those kinds of differences can be safely explored and celebrated.”

Villegas credits the culture of diversity and caring at VCU with his success as a student leader and scholar.

He said that the unparalleled diversity of VCU created an environment in which he felt confident and accepted from the first moment he stepped on campus.

Villegas also recalled faculty members such as Chernoh Wurie, Ph.D., instructor of criminal justice and Christopher Saladino, an instructor of political science, individuals who served as mentors to the impressionable undergraduate in more ways than one.

“There are professors like Dr. Wurie and Mr. Saladino—faculty who have led by example in their own communities—that inspire you to be comfortable with who you are and to make an impact in your own community, right now,” he said.

For Villegas, being “unapologetically authentic” also means acknowledging that he will not pursue a career in either national security or law enforcement following graduation.

“I’ve enjoyed my studies at the Wilder School. I think I have learned how to think critically and evaluate the complexity of a number of issues that remain critical to me personally, but I’ve also come to the conclusion that neither law enforcement nor national security really feels like me,” he said.

Instead, Villegas hopes to attend graduate school following commencement. He would like to pursue a career in foreign policy.

“My dream,” said Villegas, “the job that feels like me...is a position at the United Nations.”