Wilder School No. 38 in U.S., Top Ranked in Virginia for Social and Urban Policy 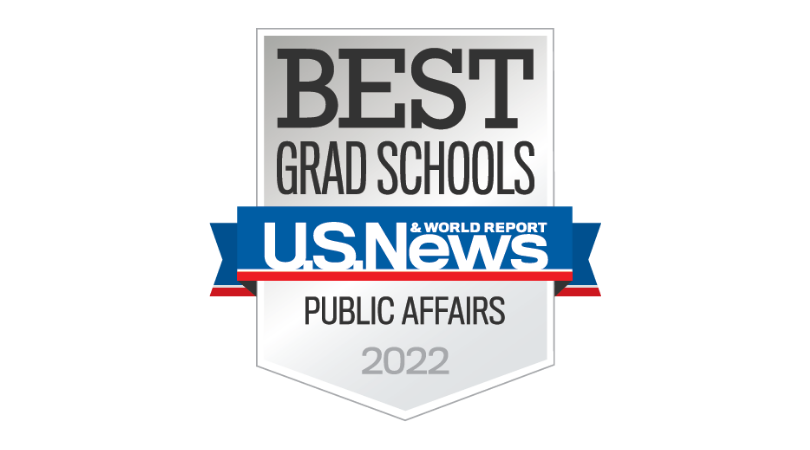 The 2022 U.S. News & World Report rankings confirm the Wilder School among the top 15% of graduate schools of public affairs at No. 38. The school is also ranked No. 19 in Social Policy, No. 28 in Urban Policy, and No. 34 in Public Management and Leadership.

Virginia Commonwealth University’s L. Douglas Wilder School of Government and Public Affairs rose to No. 38 in the U.S. News and World Report's 2022 Best Graduate Schools of Public Affairs rankings issued today, marking a rise of 7 places from the 2021 survey.

It is the Wilder School’s highest ranking since its creation in 2004 and places it within the top 15th percentile of schools of its kind.

In addition to the general rankings, U.S. News ranks public affairs programs in several specialty areas. Last year, the Wilder School made its debut in the specialty rankings in the area of Public Management and Leadership and rose 5 places in this area to No. 34 for 2022. It now ranks highly in two additional specialty areas, No.19 in social policy and No. 28 in Urban Policy.

Within Virginia, the Wilder School at Virginia Commonwealth University is the only public affairs school ranked in the areas of Social Policy and Urban Policy and among the highest ranked institutions within any specialty area.

Wilder School Dean Susan T. Gooden said the news reflects the dedication of the school's namesake, its students and faculty.

“This is a remarkable moment for the Wilder School--to rise within the rankings and to be esteemed so highly by our peers for our leadership in providing a world-class public service education,” Gooden said.

“Our ranking as a top school in social policy, in particular, is a direct reflection of our school’s namesake, Governor L. Douglas Wilder, who has continued to invest mightily in the school’s ascent in national prominence, both as a treasured ambassador for our school and through his engagement in key initiatives that build upon our expertise in social policy, such as the school’s new Research Institute for Social Equity (RISE).”

As a distinguished faculty member, Governor Wilder, who is Virginia’s 66th Governor and the nation’s first-elected African-American governor, serves as the voice of the school’s Commonwealth Poll, an important bellwether of public opinion, and lectures regularly in Wilder School courses and symposia.

Additionally, the 2022 rankings provide evidence of our prodigious faculty, staff and students. It is their intellectual commitment to equity-oriented solutions and cutting-edge approach to improving communities that make the Wilder School a standout among public affairs schools,” said Gooden.

“The 2022 rankings provide evidence of our prodigious faculty, staff and students. It is their intellectual commitment to equity-oriented solutions and cutting-edge approach to improving communities that make the Wilder School a standout among public affairs schools."

The rankings from U.S. News caps an extraordinary year for the Wilder School, which boasted a CNN-approved state presidential poll in 2020 and earned multiple distinctions for exemplary commitment to research training and teaching in Civic Engagement, Inclusion, Sustainability and Globalization from the Network of Schools of Public Policy, Affairs & Administration (NASPAA) earlier this month. The school is among only a handful of institutions to earn all four distinctions across its five programs as part of NASPAA’s Public Service Badging Initiative.

Next month, Dean Gooden, who is the president-elect of NASPAA, will be honored with the Charles H. Levine Memorial Award for Excellence in Public Administration-- a rare prize presented jointly by NASPAA and the American Society for Public Administration that recognizes a public administration scholar who has made indelible achievements in teaching, research and service. Gooden is the first person to receive the award since 2015, and the first African-American to be presented with the prize in its 31-year history.

The U.S. News rankings are based on two types of data: expert opinions about program excellence and statistical indicators that measure the quality of a school's faculty, research and students. To view the full list of graduate schools of public affairs, visit US News.