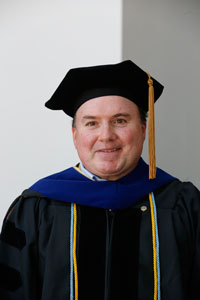 Jose Alcaine, Ph.D., was living in his native New Orleans and working at Tulane University when Hurricane Katrina slammed into the Gulf coast in August 2005.

Katrina--which the National Oceanic and Atmospheric Administration rates as the most destructive storm to strike the United States and the costliest storm in U.S history--damaged 80 percent of New Orleans.

"That fall was chaotic," Alcaine recalled. "Everything changed overnight."

At the time, he was working in administration at the Department of Medicine at Tulane's Medical Center. Schools and businesses across the region shuttered. He wasn't able to return to his office until late October, having stayed in North Louisiana for several weeks. Because of challenging conditions in New Orleans, his family wouldn't return to the city until the end of January 2006.

"Tulane is an anchor institution in New Orleans, not dissimilar to VCU in Richmond," he said. "I saw how important universities are for a whole host of reasons, whether it's patient care, employment or education. I also saw personally how important the university is to a community, how vital it is to a society."

Alcaine, the research coordinator for the VCU School of Education, applied that experience and his interest in higher education institutions to his doctoral dissertation, "Institutional Factors Affecting Performance at High and Very High Research Universities: Policy Implications." His dissertation examined higher education policy at high research universities and looked at markers that impact an institution's performance and the research money coming from grants and contracts.

In his job, which he's held for four years, Alcaine coordinates faculty research projects and serves as grant director. He joined VCU in 2007 in the Office of Research.

He started working on his Ph.D. in 2009, pursuing it part-time, while balancing his full-time job and his family; he and his wife have two teen-aged children.

"Beyond the personal satisfaction, I wanted to pursue my doctorate because I like the concept of lifelong learning," he said. "I like the broad and deep discussion a doctoral education affords, and being inspired by the knowledge. And I can only say great things about the Wilder School and its faculty." 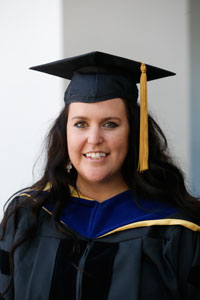 During her freshman year in college, Katherine Hall, Ph.D, decided she wanted to earn her doctorate.

"I've always wanted to be a professor," Hall said. "I love being in academia. I love the intellectual exchange and the open-minded conversations that really only happen in an academic environment."

Hall's doctoral dissertation focused on women in STEM--science, technology, engineering and math--and was titled, "They Believe that Because They are Women, It Should Be Easier for Them: Subtle and Overt Sexism Toward Women in STEM from Social Media Commentary."

"I've always been interested in women's issues, and became very interested in how women in male-dominated careers were being marginalized," she said.

She grew up in Cape Cod, Mass. After graduating from Syracuse University with double degrees in political science and political philosophy, she went on to receive her Master of Public Administration from Southeastern University.

Hall, who lives in Alexandria, started a pet care business--Tail Wags Pet Care --with her college roommate and best friend while they were working on their graduate degrees. Her business has grown to include two other employees and more than 100 clients. On a recent rainy day she had 24 dogs to walk and otherwise care for.

"I grew up breeding Boxers with my family," she said. "I love animals. They have always been a passion."

In addition to her full time business, Hall is currently an adjunct instructor at the University of Maryland's University College and teaches courses in business administration.

Hall commuted to Richmond to complete her studies at VCU. She singled out for praise Sarah Jane Brubaker, Ph.D., director of the Wilder School's doctoral program.

"Dr. Brubaker was incredibly supportive and helpful, and gave me just the right amount of guidance and encouragement," Hall said. "She was awesome and I've been really thankful to work with her"

Now that she has her doctorate, Hall wants to pursue a career that would allow her to work with women in the developing world.

"I'd like to collaborate with women in developing nations in creating successful business models that could help women economically support their families," she said. "Economic independence is a central issue for women around the world and I want to be a part of facilitating that." 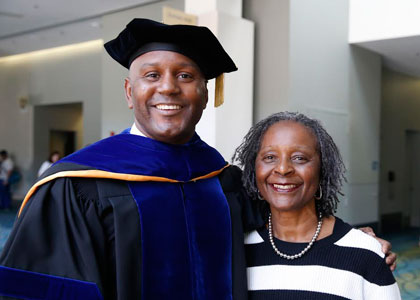 Like many of us, LeQuan Hylton, Ph.D., stands on the shoulders of family before him.

There was Uncle Daniel, who had no legs but had all the right moves--operating two businesses with an entrepreneurial vigor that would one day inspire the Martinsville, Va., native. There was Hylton's mom, Sharon, a single-mother who completed her undergraduate and graduate courses with young LeQuan in tow.

And there was Hylton's grandmother, America, whose visits to the sick and shut-in at hospitals and nursing homes were as routine as the sunrise.

One day America, tired and saturated with the perspiration of labor, grabbed a tiny LeQuan by the collar and insisted that he "work hard and wear a white shirt."

It was years before years before Hylton would fully grasp the power of that statement: that it was his grandmother's greatest desire to see him "working with his mind instead of his hands," a privilege symbolized by the barely soiled shirts she washed daily for her employer.

Last month, America's quest came full circle as her grandson became the first member of his family to earn a terminal degree.

It's an exceptional feat for a 33-year-old who has held down two high-powered jobs for the past several years. By day, Hylton serves as the data management team leader at the U.S. Department of Defense where he's helped to manage the implementation of one of the largest enterprise management systems in the world. On weekends and everything in between, he serves as the aide-de-camp for the commander of the 80th Training Command in Virginia.

Despite a tremendous workload, Hylton finds time for charitable work and has become a respected advocate for the homeless in Greater Richmond.

In 2003, he launched an outreach program through his church, Saint Paul's Baptist, throwing himself at the problem by leading initiatives to provide free meals. In 2010, Hylton and his mother launched Unified Properties, LLC. The company is dedicated to buying, renovating and leasing affordably priced premium homes and commercial spaces.

"Growing up in a rural community gave me a strong sense of caring for others. It was a loving place where I learned that if we could meet the needs of our family, extended family and others, then we ought to," Hylton said.

Hylton's dissertation, "Perceptions of the Homeless Toward Nonprofit Human Service Providers," focused on a survey and analysis of 502 homeless and their preferences for assistance services.

Later this year, Hylton will embark on what is surely his most critical service mission yet when he deploys to Afghanistan. When he returns from deployment, Hylton hopes to become a faculty member and provide the same level of inspiration and support that he was provided with throughout the years.