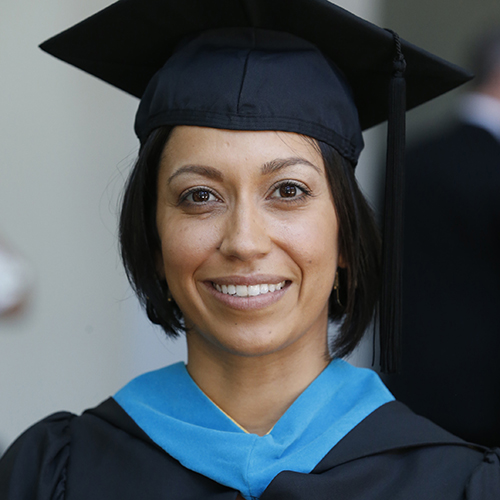 Luanda Fiscella, 30, took more than a gap year before college; she took a decade.

It was time well spent; Fiscella studied on two coasts, travelled the world, dedicated herself to service and discovered a passion for housing and community development.

Fiscella, who gave the undergraduate commencement speech at the Wilder School’s 2016 spring graduation ceremony, was awarded a bachelor of science in urban and regional studies on May 14.

“I’ve never felt pressure to operate on a traditional timeline,” she said, “but those years between high school and college were a great privilege—a time to step back and reflect, to gain perspective on my personal values and goals, and to do so in a setting apart from the usual pressures and expectations.”

If Fiscella seems unusually self-actualized for her age, it’s because she’s been relentless in her quest toward self-discovery.

She was born in Nicaragua, the youngest of four girls. Her grandfather was Benjamin Fiscella, a successful Newport News based developer who financed numerous missions to communist countries and supported development projects in Cuba, Nicaragua and the former Soviet Union. Fiscella’s parents met during one of her grandfather’s mission trips and started a family in Managua, the capital of Nicaragua, soon after.

Life in Managua wasn’t easy. By the 1980s, the city was ravaged by the 1972 Nicaragua earthquake, a series of floods and years of civil war. Fiscella was 7-years-old when her family relocated to the United States, but she says, her identity and core values were already beginning to take shape.

“My early childhood in Central America and my bi-cultural heritage has always been a source of pride,” said Fiscella, “I feel inspired to be a part of a global community of people who have persevered through adversity.”

And though life in Nicaragua left an indelible mark, Fiscella is comfortable with the concession that she was equally shaped by its antithesis: a privileged life within the hallowed halls of two of the most elite prep schools in America.

Between the ages of 13-18, Fiscella studied at Saint Margaret’s, an all-girl’s Episcopal school nestled along the Rappahanock River and Verde Valley, a highly selective boarding school characterized by rigorous academics, a commitment to intercultural understanding and a unique philosophy known as “IB + Dirt.”

Life on Verde Valley’s red rock campus was transformative for Fiscella. There she engaged in the arts, service and outdoor projects that gave purpose to her studies. And though life at 4,500 feet was at times cloistered—the campus is located under the rim of the Colorado Plateau at a spectacular elevation—it was at Verde Valley that Fiscella began to truly embrace her responsibility as a global citizen.

“My time in Sedona was really where I began to develop as a critical thinker,” she said.

“It was a beautiful location, an ideal place for study and contemplation; but it was also a place where students and faculty cared deeply about social justice and their connection with the outside world,” said Fiscella.

“Living a stone’s throw away from the U.S. Mexican border only underscored that relationship. Why for example, were immigrants who were so close to us willing to literally die in the pursuit of freedom? I feel very fortunate to have received an education that provided both the content and the context to become a critical thinker.”

Fiscella emerged from boarding school inspired her to make a living helping others.

At 18, she went to work, exploring the country and selecting meaningful employment and volunteer initiatives along the way. That employment included time in Phoenix, Arizona, where Fiscella worked for a humanitarian organization providing food, water and medical aid to migrants in the dessert. It also led her to San Diego, California, where she worked as a program assistant for a non-profit that delivered groceries, prescription medications and household items to seniors and people with disabilities.

In 2011 Fiscella went back to school, enrolling first in a planning program at Portland State University. She did well; excelling in her classes while balancing the demands of work.

But distance from family, interminable rain and a “nagging desire” to study and practice within a wider range of distressed and emerging communities convinced Fiscella that the urban and regional studies program at the VCU Wilder School was a likelier fit.

So she took the plunge, moved to Richmond and transferred to the Wilder School in 2014. “It was a risky decision,” said Fiscella, “because I had nearly completed the program at Oregon and after having lived in several international communities, I wasn’t confident that I would find the diversity or exchange here that I have always thrived on.”

“But within the Wilder School I have never been so surprised,” said Fiscella.

“I have classmates that play rugby, make clothes, are statisticians, are into economics, speak languages and like architecture. The diversity in the skills and the interests of my classmates runs the entire spectrum. For me that’s been really inspiring. Because I know that what makes the Wilder School special is that it is not a place where people study the same thing or have the same mindset. We’re a cohort of different backgrounds, varying beliefs and I have faith that we’re going to add a lot of skills and resources to the communities we serve.”

Luanda Fiscella is currently making a difference right here in the River City as a program assistant at Virginia Sun, a nonprofit that seeks to educate Virginians about the benefits of solarization.

When she is not working, Fiscella is a volunteer leader for HandsOn Greater Richmond where she recruits volunteers for Habitat ReStore, a retail outlet that provides donated building and home improvement supplies to the general public at sharply reduced prices. Proceeds are used to help build strength, stability, and affordable housing in local communities around Richmond.