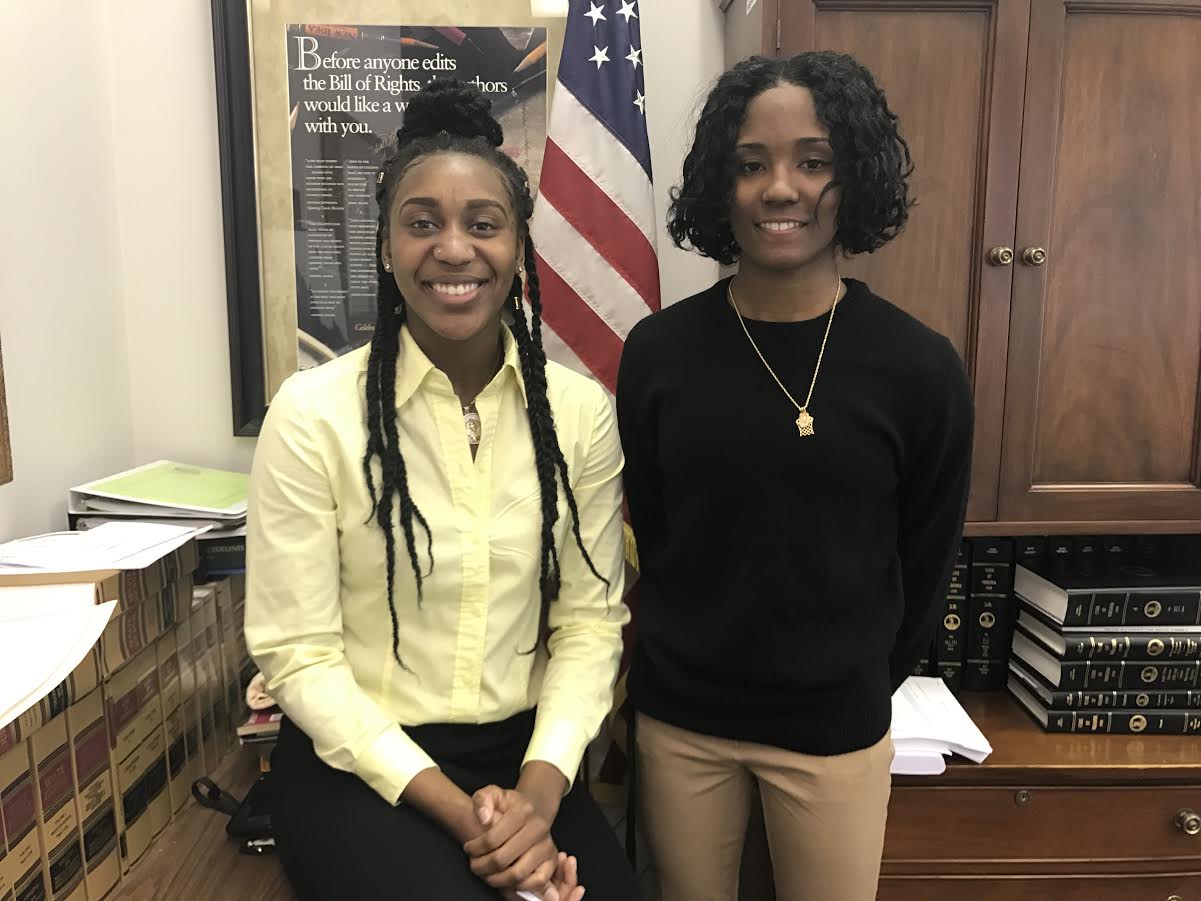 Both are situational. You can diagram plays, but what happens—whether on the court or in the legislative chamber—is improvisational. You have to be quick. Both require players to be willing to change and adapt at a moment’s notice.

Pegram and Thorpe, both senior guards and criminal justice majors, each spent two mornings a week volunteering in the office of state Sen. Ryan McDougle, R-Hanover, during the 46-day session in January and February. Adding the session to their already full schedules during the busy basketball season made for an intensive swirl of bills, balls and homework, but one the master multitaskers completed with their characteristic grace.

“Basketball is politics,” said Thorpe, who’s from Reading, Pa. “Everything is politics in the real world. It’s very strategic. And you need good observational skills.”

“It’s all about communication,” she said. “You communicate a lot in the General Assembly and you have to be able to communicate in basketball—you have to be on the same page. And it’s not just talking. You have to learn people’s facial expressions.”

“There are so many different fields in criminal justice, and this has been a great experience in learning about the political side of everything,” Pegram said.

Working in the General Assembly gave them a front-row seat to the legislative process and the shaping of public policy. Capitol Square—located just blocks away from VCU—offered a different perspective.

“There are so many different fields in criminal justice, and this has been a great experience in learning about the political side of everything,” Pegram said.

“I feel like we’re part of something,” Thorpe said. “I’ve enjoyed listening to people’s perspectives and understanding all the different sides of the issues. And I’ve enjoyed meeting new people every day—it’s not like we’re just sitting at a computer. There’s always something different going on. I realize how blessed I am to be working here and to be learning so much.”

Thorpe volunteered on Monday and Wednesday mornings, while Pegram came to the General Assembly Building on Tuesday and Thursday mornings. In addition to their classes, daily basketball practices and team-related work followed.

Many of their duties involved meeting with visitors and serving as McDougle’s representative when they stopped by.

"I always enjoy having student athletes as interns,” McDougle said. “Ashley and Isis have proven to be highly competent and a very valuable part of my office."

As chairman of the Senate Rules Committee, McDougle’s office received a steady stream of visitors—especially in the mornings, which seems to be the busy public time of the bustling legislative session.

“Everybody comes by this office,” Thorpe said. “We met a lot of people.”

With a minor in psychology, Thorpe is interested in working for a government agency such as the CIA. Pegram, who is minoring in homeland security, wants to explore juvenile justice and being a mentor for children.

“I have an interest in helping children. Criminal justice is so broad. There’s really so much that I can do,” Pegram said.