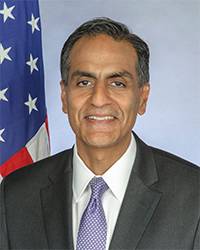 India, the world’s largest democracy and second most populous country, is one of the U.S.’s key global partners. The relationship between the two countries is rooted in common values, including the rule of law, respect for diversity and democratic government. In 2017, India will mark its 70th anniversary of independence.

Verma will talk about the special relationship between the two countries. The ambassador oversees one of the largest U.S. missions in the world, including four consulates across India and nearly every agency of the U.S. government. Previously Verma served as assistant secretary of state for legislative affairs in the Obama Administration and also worked for senior Congressional leaders. He is a veteran of the U.S. Air Force, where he served on active duty as a judge advocate.

The India Chair hosts the Ranjit Sen Memorial Lecture and brings experts on the country’s culture, history and vibrancy of its civil society to VCU to share their knowledge and engage the community.