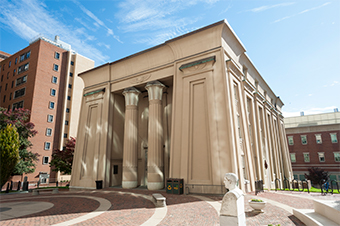 In a first collaboration of its type between the two schools, the Wilder School’s Center for Urban and Regional Analysis and the VCU School of Medicine have received a Presidential Research Quest Fund award.

The project will evaluate the cost effectiveness of the Bridging the Gap program, a hospital-community centered injury and violence prevention initiative started by the VCU Trauma Center in 2007 that targets youth.

Fabrizio Fasulo, Ph.D., CURA director, and Sarin Adhikari, Ph.D., research associate, will lead the Wilder School’s research and work with Dr. Michel Aboutanos of the School of Medicine. In addition to the cost effectiveness of the program, Fasulo and Adhikari will analyze its overall economic and social impacts.

“The Wilder School has a natural role in partnership with other units across the university to look at the economic and policy side of what they do,” Fasulo said. “The Wilder School’s Office of Public Policy Outreach is the perfect liaison between our research centers and other VCU programs.”

The study’s findings will help formulate health policies at the local and regional levels, as well as help the Bridging the Gap program become a model for injury and violence prevention for other trauma centers in the United States.

As a Level 1 Trauma Center, VCU’s facility can provide total care for every aspect of injury, from prevention through rehabilitation.

Nationally, homicide is the third leading cause of death among youth in the United States. In Richmond, according to the award proposal, the homicide rate for those ages 10 to 24 is more than four times the state level and five times the national average.

The VCU Trauma Center receives 85 percent of all intentionally injured patients in the Richmond area. Youth between the ages of 10 and 24 account for 95 percent of total assault-related injury cases. Similarly, the total number of admissions secondary to assault, stab and gunshot wounds averages 500 per year—40 percent of which are in the ages 10 to 24 category.

The trauma center launched the Bridging the Gap program 10 years ago to take a proactive role in developing a hospital-community based youth violence prevention and intervention initiative. Since the program started, the rates for youth re-injury and mortality from re-injury have fallen significantly.

The study will answer such key questions as what is the economic impact resulting from cost savings due to reduced healthcare cost and lives saved; value of the outcome for each dollar invested in the program; and overall societal outcome in terms of reduced incarceration, increased sense of safety and security, increased educational attainment, labor force participation and household income.

“Even though the program has shown promising results in terms of violence prevention, its cost effectiveness and its impact on the community have yet to be studied,” Fasulo said. “This is an important public policy issue.”