Presenters, many faculty members at the Wilder School, met virtually to discuss the impacts of the pandemic.

By Brian McNeill and David Slipher

The United States is facing a threefold pandemic amid COVID-19, with ongoing major threats to public health, economic livelihoods and access to justice. That was the central message of the 2021 Wilder Symposium, “The Triple Pandemic: Implications for Racial Equity and Public Policy,” held Thursday.

A signature event of the L. Douglas Wilder School of Government and Public Affairs at Virginia Commonwealth University, the symposium is a forum hosted by the school’s namesake, L. Douglas Wilder, the 66th governor of Virginia and a distinguished professor at the school.

“The triple pandemic … is something that’s going to affect us, that does affect us on a regular basis. And it’s not going to be handed down from one generation to the other. If we are to survive, the time now is to deal with it and to deal with it in a realistic manner and to discuss it,” Wilder said. “We're very fortunate and I hope that the essence of this gathering of scholars will produce further analysis and debate. The expertise that we have assembled here has exhibited and been recognized at national and international levels, and what they will be presenting will be further grist for the mill for intelligent debate and discussion.”

“We’ve got to be unrelenting in our work to ensure access and opportunity to all human beings,” Rao said. “Governor Wilder is a distinguished professor and trailblazer. Today’s Wilder Symposium is an opportunity to tackle systems and policies that perpetuate inequality at the expense of the well-being of communities of color.”

“The triple pandemic references three specific areas: health, economics and justice. The book will not simply document the existing problems made worse by the pandemic, but it also provides historical context to the issues that manifest in new ways the existing inequities revealed during COVID-19,” Gooden said. “The volume is distinguished in its focus on the implications for racial equity through an examination of both existing public policy, as well as, of course, new ideas for change.”

Each panel discussion featured contributors from the three primary sections of the book, addressing topics such as policing, housing, workforce development, disaster response, education, immigration, vaccine distribution, re-entry of justice-involved individuals and responses to public protests – all with an eye toward equity.

“The triple pandemic … is something that’s going to affect us, that does affect us on a regular basis. And it’s not going to be handed down from one generation to the other. If we are to survive, the time now is to deal with it and to deal with it in a realistic manner and to discuss it,” Wilder said. “We're very fortunate and I hope that the essence of this gathering of scholars will produce further analysis and debate. The expertise that we have assembled here has exhibited and been recognized at national and international levels, and what they will be presenting will be further grist for the mill for intelligent debate and discussion.” 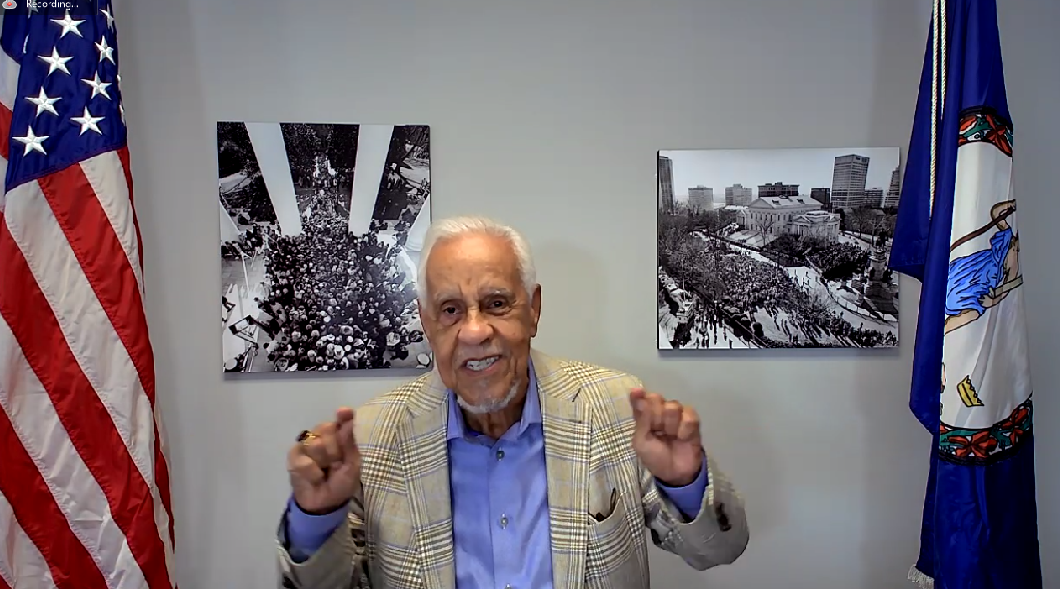 Hans Louis-Charles, Ph.D., an assistant professor in the Wilder School’s homeland security and emergency preparedness program, discussed how COVID-19 is just the latest disaster to disproportionately affect racial and ethnic minority communities, with an intersection of poverty.

“Racial equity is extremely important. But unfortunately, it continues to be mostly, if not completely, ignored in emergency management,” he said. “So despite decades of research that has shown time and time again that disasters of all sorts have a disproportionate impact on African Americans and other minority communities, racial equity is not a core tenet of emergency management at all.”

He cited the example of one county with a high minority population and a high COVID-19 death rate where the only mention of race in its emergency management planning guidelines was about “the need to prepare for Black Lives Matter riots.”

Louis-Charles described how he and colleagues researched the extent to which local emergency management offices had incorporated racial equity into their planning. “What we found was alarming but not surprising.”

These jurisdictions, he added, have underdeveloped local emergency management agencies and planning guidelines. “Often the emergency manager is a secondary role for the fire chief or police chief, with little to no additional staff support,” he said. “So these counties and cities and parishes are at a competitive disadvantage when it comes to applying for competitive federal and state grants.”

On the justice panel, Chernoe Wurie, Ph.D., an associate professor in the Wilder School’s criminal justice program, spoke about efforts to reform policing practices through both top-down legislation and local departmental initiatives. Wurie, who spent 10 years as a police officer, spoke from direct experience about the changes he is seeing as well as the need for greater consistency across jurisdictions.

“I'm seeing things are happening,” said Wurie. “So yes, we have to keep pushing for more streamlined community boards and amongst police departments from federal, state and local to be all on the same page when we talk about police reforms. It does not work when you have federal standards state standards and their local standards, it has to be all one standard for local, state and federal.”

Christina Mancini, Ph.D., also an associate professor in the Wilder School’s criminal justice program, spoke on the issue of justice-involved people, including racial disparities in the correctional system in both contact and confinement.

“Over 85% of all people who serve time in prison will be released into the general population,” Mancini said. “This means we cannot prison our way out of the crime problem.”

Effective reentry programs, she said, are needed to help people transition back into the community, make them less likely to recidivate and more likely to contribute to society.

Harper-Anderson, an associate professor in the Wilder School, spoke about the impact of COVID-19 on Black workers and Black-owned businesses in Virginia.

“Unemployment in Virginia is lower than in the U.S. However, the Black-white gap in terms of unemployment is wider in Virginia, and it persisted throughout the pandemic. And, in fact, increased,” she said. “While Black workers only make up 19% of the labor force in Virginia, they made up a disproportionate share of the initial unemployment claims. For most of the weeks between January and September, that percentage was over 35%, and it reached as high as 48% in July. All of this while our unemployment system in Virginia was ranked amongst the lowest and constantly in the news.”

Black workers were less likely to be able to work remotely, were more likely to miss work because of COVID-19, and were overrepresented among frontline occupations in Virginia to an extent greater than the national average, Harper-Anderson said. For example, African Americans make up 33% of home health aides in the U.S., but make up 50% in Virginia, she said.

Economic policies meant to address the pandemic ended up creating greater inequality, Harper-Anderson said. For example, Paycheck Protection Program loans were less likely to be granted in communities with higher populations of Black residents and the loans overall were for smaller amounts.

“The implications of the impacts of the coronavirus on Black workers and businesses are far-reaching. Virginia has begun to initiate numerous initiatives, including workforce development, economic development, housing and others,” she said. “It will be critical going forward that those initiatives that are designed to address the implications of the pandemic, that the programming and policies are race-specific and directly impact the system of racial inequality upon which the pandemic issues were layered over.”

Ben Teresa, Ph.D., an assistant professor in the Wilder School and co-director of the RVA Eviction Lab, spoke about evictions and housing instability, focusing on an evaluation of Richmond’s eviction diversion program.

More than 600 people participated in the program that began in 2019, and the lab contacted about 70 of them through surveys and interviews. They found that the majority were Black women and heads of household, and most had children.

“Almost all of the participants in the eviction diversion program were able to stay in their homes,” Teresa said. “At the same time, what we learned about participants’ experiences is that while they were able to stay in their homes, many of the underlying causes of housing instability – that would include things like unaffordable rent, people paying 30% or 50% or more of their income towards rent, job quality, child care costs and transportation – that all these factors effectively remain in place, even though the immediate need of housing stability, of keeping people in their homes, was successful for almost all participants.”

While the eviction diversion program was launched before the pandemic, Teresa said, it could help inform COVID-19 policy and post-pandemic eviction policy. Among the insights, he said, is that a program like this helps tenants avoid going to eviction courts and avoid losing their homes. He said it also increases contact between the tenant and Central Virginia Legal Aid Society attorneys, which helps tenants know their rights and navigate the system and helps shed light on the underlying causes of housing instability.

“There are a number of important reforms that came out of the eviction diversion program being used quite heavily in Richmond public housing, and so there's a number of critical reforms that have since been implemented as a result of the program,” he said. “[It also] helps us increase state and local capacity to address housing instability both in the pandemic and after.”