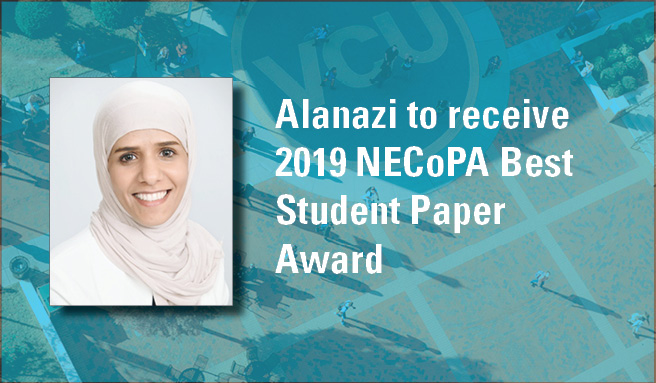 Layla Alanazi, a doctoral candidate in public policy and administration at the VCU Wilder School, has been awarded the Northeast Conference on Public Administration (NECoPA) Best Student Paper Award. Alanazi will be presented with the award at a ceremony held during the 2019 Annual NECoPA Conference in Brooklyn, NY on November 9.

Alanazi was awarded the distinction for her paper, “Does Gender Really Matter? Testing the Mediating Role of Public Service Motivation Between Gender and Organizational Citizenship Behavior in Federal Agencies.”

She recalled her connection with the research that inspired the paper during a phone interview conducted yesterday.

“I became very passionate about the topic when I started reading about women’s experiences in the Federal government and how they are more likely to experience inconsistencies between their work and their identities as women to the extent that these inconsistencies can adversely affect how their work is perceived and evaluated,” said Alanazi.

“Reading about the theory of public service motivation (PSM) has inspired me to look at this silent issue in the Federal government and to answer a tough question: who is more motivated to serve the public? Men or women? If the answer is women, then how their PSM levels, indirectly, affect their performance.”

NECoPA’s Best Student Paper Award is used to recognize emerging scholars in public administration while encouraging their participation in NECoPA and its parent association, the American Society for Public Administration.

The award is presented to one student each year through a rigorous process that includes a blind review. Competition for the distinction is stiff and includes applicants from across the Northeast region, including 16 states and the District of Columbia. Candidates from 57 higher education institutions with NASPAA accredited programs, including Syracuse University, New York University, American University and Columbia University are encouraged to apply.

For her part, Alanazi said she’s thrilled and struck by an equal sense of gratitude and obligation.

“I feel very proud to have won such an award as it translates all the efforts I put into this paper. I feel a sense of responsibility after winning this award as this is just the beginning and there is a lot more that I can achieve, and there are higher pinnacles that I need to touch by continuing to invest my time and efforts in research,” she said.

“The Wilder School provided me with all the tools and resources needed to achieve this distinction. I have been surrounded by great faculty and students who are always there, supporting and helping me to reach my goals.”

This is the second of two prestigious awards granted to Alanazi this year. In the spring, she received the Wilder School’s Outstanding Doctoral Student Award as recognition for excellence in service and scholarship to the school.